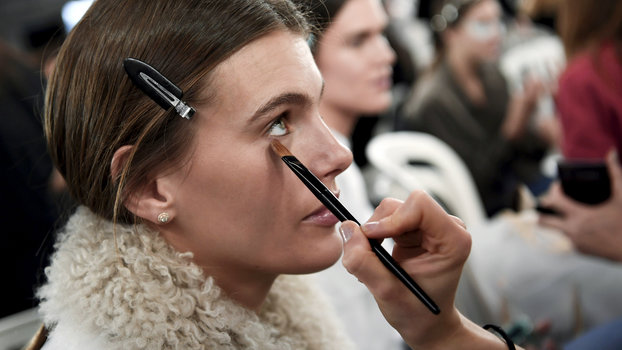 Setting your concealer with powder (AKA, baking) is a pretty popular makeup technique. Kim Kardashian swears by the step (and when does she ever have dark circles?), while others claim it helps reduce oil and creates a smooth, flawless canvas. Hell, it pretty much rules YouTube tutorials. But bake the wrong way, and you could end up looking 10-15 years older than you actually are.

Trust me, I’ve been through it, and it’s not the reveal you want to see after patiently sitting in a makeup artist’s chair for 35+ minutes.

So what is that major mistake that causes you to appear like you’re aging at a rapid pace? According to Sir John (yes, Beyoncé’s go-to man), it’s when people use pressed powder instead of loose powder to set their concealer.

“Pressed powder is so heavy and dry,” he says. “Anything heavy and dry is a recipe for disaster when it comes to your skin. It’s going to weigh your skin down. It doesn’t matter if you’re eight. You look like you’re 88.”

Because it’s so heavy and has a higher chance of oxidizing, it also has the potential to settle into any sort of crease and create deep lines that just aren’t there.

RELATED: Do Our Eyelids Need Sunscreen?

While Sir John says he actually doesn’t believe in baking at all (he doesn’t like applying that much powder on anyone), if you do want to set your concealer with powder, he says to only use loose powder. You just need to make sure it’s light enough, and for that, he has a test.

“Take the loose powder and blow it, if the particles go up into the air, it’s OK for the ocular area,” he says. “If they drop immediately, it’s too heavy and you don’t want to use it.”

VIDEO: Coinage: Why Lash Extensions Cost So Much

You’ll also want to be sure to apply it with a brush, and not with a puff, to avoid applying too much powder.