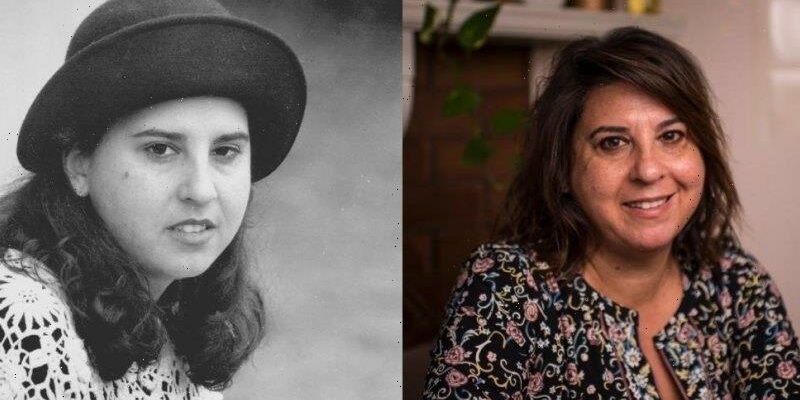 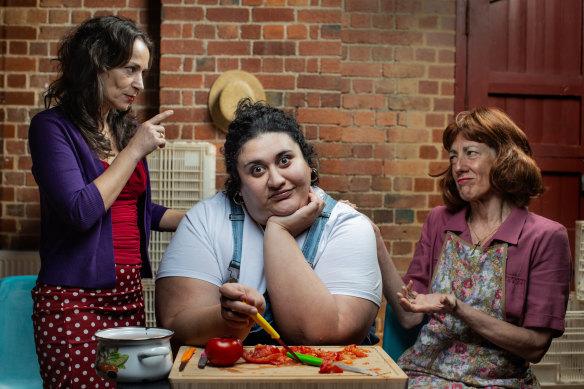 Chanella Macri (centre) with Lucia Mastrantone and Jennifer Vuletic in the stage adaptation of Looking for Alibrandi.Credit:Simon Schluter

I’m writing this on Wangal land and I’d like to acknowledge the traditional custodians of this land and pay my respect to their elders, past and present. I’m defined by many identities, and one is that I’m the granddaughter of migrants who settled on stolen land. It’s never lost on me that both my maternal and paternal grandparents chose to begin a new life in a place with a 40,000-year history of oral storytelling. I come from a family of storytellers and that’s how Looking for Alibrandi came to be.

In my family, stories about the past were a given: at Sunday lunch with the extended family; whilst travelling to the Burdekin where my mum grew up; or with my sisters on our parents’ bed every night, talking over each other’s voices. I wasn’t always an attentive listener. My greatest regret is ignoring my maternal grandfather’s stories because by the time I wanted to write about a girl discovering what life was like for her grandfather in an Australian internment camp during World War Two, my Nonno had been diagnosed with Alzheimer’s and it seemed as if we had lost a library. Volumes of stories about arriving in this country as a young man in the 1920s, buying a horse, getting a tattoo, and being interned, even though he was a British subject. So, I wrote about my Nonna instead, and that’s why Looking for Alibrandi is about three women. I often wonder about that other book. 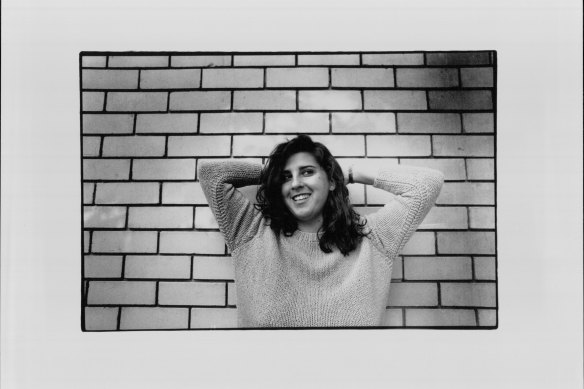 Melina Marchetta in 1994, two years after Looking for Alibrandi was published.Credit:Sahlan Hayes

This year marks the novel’s 30th anniversary and I’ve spent a large chunk of it searching for manuscripts and articles and interviews. It’s made me feel incredibly nostalgic. It’s made me miss my dad and my grandparents. It’s made me remember how suffocated I felt when I was a teenager, yet there was never a moment when I felt unloved and that has counted for so much. And I remember shame because shame lives very close under the thin skin of memory. I started writing because I was a lover of books from the age of seven, but never found myself in the pages of a novel. When you don’t have an identity outside your extended family then you question your worth a lot more than someone who is constantly reassured by positive and warm representations of themselves in books, films, TV, mainstream media and national legends and heroes. I’d like to say that cultural representation has become a bit better, but we are in the year 2022, so I have a problem with a “bit better”. I want to say we need to “do better”. And that’s where the memory of shame comes from. Back then I didn’t resent those people who left us out or who called us names. I resented myself. There’s an element of self-loathing that comes with being omitted from the narrative of your own society.

At the time of writing Alibrandi, I belonged to a community of extended family. Our world was defined by culture and religion and we spent our weekends going to weddings and christenings and, of course, visiting my paternal grandparents. We called their home “Nonna’s” because, despite everything, my paternal grandmother dominated and no one overshadowed her. I was a wallflower with a very outspoken inner voice that I allowed no one to hear. Back then, I knew three things in life: what it was like to belong to an Italian family, Catholic schooling and Sydney, particularly the inner-west. So, it’s no surprise that I wrote about a girl from an Italian family who lived in Sydney and went to a Catholic school. Josie Alibrandi was a combination of my two clever, vibrant sisters and me. She spoke words out loud that I had stored in my head forever. I understood every fibre of her being. She was my mouthpiece to the world and I will be forever grateful that she came calling. 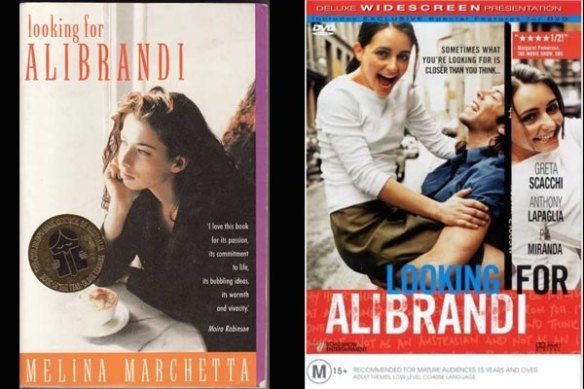 Australian author Melina Marchetta’s debut novel, Looking for Alibrandi, was made into an award-winning Australian film.

I wrote the novel in my bedroom in my family home. It’s the home where I’m writing now as my daughter and I have lived with my mum for the past two years. So, the memories are rife. Of my first computer, after spending years on an electric typewriter. Of floppy discs that lost chapters of work. I remember looking up the yellow pages and ringing publishers. What did I have to do to submit a manuscript? The response was always the same. Typed, double-spaced, with a synopsis. Oh, and by the way, “We receive 2000 unsolicited manuscripts a year and we accept about one or two of them.” To be honest, I had never excelled at anything except a sprinting career in kindy and year 2. I had finished high school at the end of year 10 with nothing significant said about who I was going to be. I was a typist in a bank. What chance did I have of getting a novel published in the ’80s?

Back then there wasn’t really a genre called YA and, of course, there were few novels about a teenager from a non-Anglo/Celtic background. The manuscript was rejected about six or seven times during a four-year period. By the time I received any good news about it, I was working in a low-paying travel job and taking advantage of $25 plane tickets to travel the world any time I could. Those journeys, mostly on my own, were my greatest lessons in life and an escape from the smallness of my world. I’m not sure who that girl was running through Red Square in the former Soviet Union, but she sort of impresses me these days. 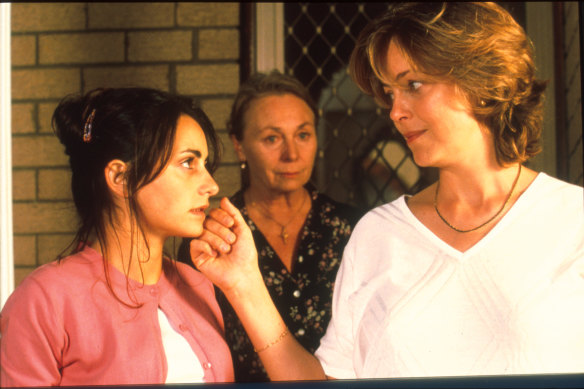 Pia Miranda, Elena Cotta and Greta Scacchi in a still from the film Looking for Albrandi.

The week Looking for Alibrandi came out in September 1992, I was in my second year of university studying teaching. I failed a King Lear essay that week. I also remember a Korean cult declaring the end of the world on the very same day as the novel’s release, so I went into the experience with a sense of doom. I’ve said often that Alibrandi is bigger than I am, and I’ve spent the past 30 years trying to deal with, escape, reconcile, and embrace its great importance to me. I haven’t read it since I was forced to teach it for the HSC, because in the world of English teaching, there’s nothing worse than marking 100 essays about your novel.

I’ve tried often to work out what it is about Josie Alibrandi that has stood the test of time. In a novel where there’s no social media or mobile phones, set before the #MeToo movement and 9/11, how has she managed to find an audience in the past three decades? Perhaps it’s because many of us, regardless of culture and socio-economic status, grapple with our identity, with wanting to be accepted, and with being the underdog. Josie bucked the system whilst desperately wanting to be part of it. And of course, she didn’t have it all, which made her relatable. It meant that readers were willing to go on the journey with her. 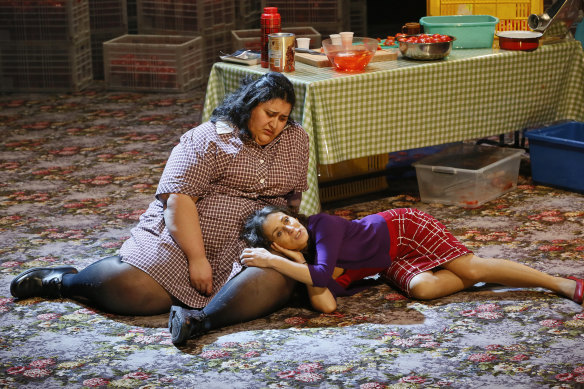 Chanella Macri and Lucia Mastrantone in Looking For Alibrandi on the stage.Credit:Jeff Busby

In the 2000 feature film, Pia Miranda brought something magical to her – different to my Josie, but just as engaging and passionate. It became a very personal project for me, with my Nonna’s house being used as Katia’s and my sister and parents in various scenes. Many of the students from the school where I was teaching at the time were extras and I loved that Sydney was shown as a functional city, and part of everyday life. More than anything, I’ve always loved that Josie was the first female lead in an Australian film in the 21st century.

I’m not sure what Alibrandi’s legacy will be, but I love that women of colour, and those from non-English-speaking backgrounds, have expressed to me how important the novel was to them and how it inspired their own writing journey. Not because I was writing directly about their cultural experience, but because I was writing about “the other”. And much like the telling of their own stories, it was my story to tell.

I’ve asked myself often, would readers have felt the same way about the novel if it wasn’t written by me – an Australian girl at the time, whose father was born in Sicily and whose maternal grandparents were born in Sicily? What if it was written today? The same book with everything you’ve loved about it, except for one not-so-tiny detail. What if it was written by an Anglo or Celtic Australian? Yet, when theatre director, Stephen Nicolazzo, who identifies as queer Italo-Australian, introduced me to Vidya Rajan, a young Australian writer who identifies as Indian/Tamil, the vibrancy and the humour in her words shone. When Stephen cast Chanella Macri, an Australian Samoan-Italian actress, she asked him if he was sure, because she wasn’t the Josie everyone knows. His response was that in 2022 she definitely was and I knew they were the right people to guide the story into this part of the century

This week, my daughter is doing a speech about travelling back in time. If it was possible, I know I’d travel back to September 1992. I’d tell that girl who’s awaiting the release of her novel that failing King Lear isn’t such a big deal, that the world is always going to feel as if it’s going to end, so learn to deal with it. I’d tell her that she’s smart and worthy and beautiful and that her words will bring solace to others. That she will teach her own novel, that she will watch Alibrandi in Taormina with her parents, in the town where her dad was born, and that it will still be studied three decades on and that more than anything, no one is ever going to confuse her about where she belongs. 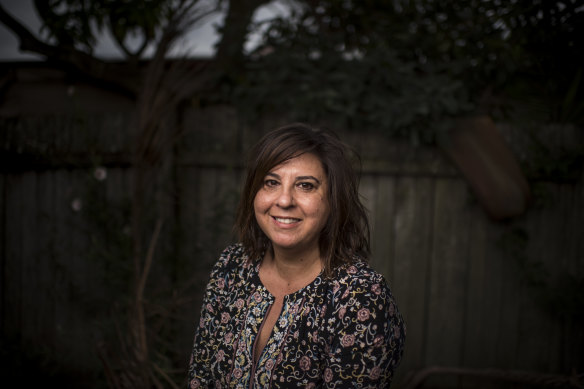 And soon I’ll be ready to open those pages again with my daughter, because I want us to read it together, in the way I know it’s been shared between many young people and their parents. B’s growing up in a different world now, one where our names aren’t anglicised (although still mispronounced) and sadly, where some of those who were called names, are the name-callers. My daughter will understand Josie because she’s lived in a three-generational household herself and because there are complexities in her own life and identity. But for now, we’ll watch the stage play together at Belvoir Street Theatre. Three generations of Marchetta women, as well as my sisters, nephews, brother-in-law, cousins and friends. I belong to a larger community now, one defined by so much more than the one I grew up in. Forever grateful, on Wangal land.

Looking for Alibrandi is at Belvoir St Theatre from October 1 to November 6.