The fate of a Tamil family detained on Christmas Island will be decided within days as the federal government faces growing calls to release the four asylum seekers after one of them was evacuated for treatment in a Perth hospital.

Immigration Minister Alex Hawke is close to a final decision on whether to intervene in a long-running court dispute over the family’s claims, with Liberals and Nationals asking him to let them rejoin the community. 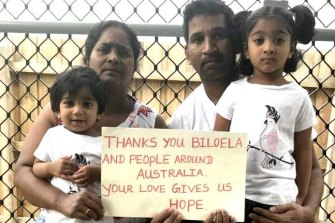 The Biloela Tamil family at the centre of a deportation row.Credit:Facebook

But government backbenchers are not being told which way the decision could go and some MPs believe the outcome should be left to the courts, given a Federal Court decision that the two parents should not be granted refugee status.

Federal crossbenchers stepped up their calls for compassion for the family on Sunday, saying Mr Hawke should use his discretion to give the four family members visas to settle in Australia.

“It’s not a case that this family should be brought home now – they should never have been sent,” South Australian independent Rex Patrick said.

“What has been achieved by locking up these two beautiful Australian girls and their parents?”

Centre Alliance Senator Stirling Griff also said the family should never have been sent to Christmas Island almost two years ago and should be allowed to settle in their former home in the Queensland town of Biloela.

“This government is not only inhumane but wasteful of public funds, detaining a family who deserve compassion, not segregation from the community that welcomed them and wants them back,” Senator Griff said.

While One Nation leader Pauline Hanson backs the government on border control, other crossbenchers argue the government could let the family stay without creating a wave of asylum seeker arrivals.

Tasmanian independent MP Andrew Wilkie said the treatment of the Biloela family was “shameful” while fellow independent Zali Steggall, who represents Warringah in Sydney, said the government should let the family go home to Queensland.

Independent MP Helen Haines, who represents Indi in northern Victoria, said she was alarmed, as a former nurse, at the evacuation of the youngest daughter to Perth and believed the family should be settled in Australia.

Priya and Nadesalingam Murugappan and their Australian-born daughters, Kopika and Tharnicaa, were detained on Christmas Island in August 2019 after earlier detention on the mainland while they sought refugee status in the courts.

The Murugappan parents lost their attempts in the courts to gain refugee status in Australia in May 2019 when the High Court refused them leave to appeal against a Federal Court decision that they should be deported to Sri Lanka.

But the Federal Court decided in February that Tharnicaa had been denied procedural fairness, continuing the legal process while the family’s lawyers ask the government to let them stay.

Mr Hawke is considering a legal brief estimated to be about 1000 pages long including advice from the Department of Home Affairs as well as court documents and a submission from the family’s lawyers.

He could decide to do nothing, allow the family to apply for visas regardless of the court decisions of the past or bestow any visa in the public interest under Section 195A of the Migration Act.

But many Liberals believe the outcome should be left to the courts because of the risk of setting a precedent that encourages asylum seeker arrivals.

“My heart bleeds for the kids, I think it’s tragic, however, you have to look at the facts,” Queensland Liberal Warren Entsch said.

The High Court decision on the two parents showed the best option for the family was to return to Sri Lanka and apply to migrate to Australia in the normal way, he said.

“And it’s fair to say that on contentious issues these judges tend towards not necessarily supporting government decisions, but on this they did.

“The poor bloody kids are victims in this and I think the lawyers, and the parents, have a lot to answer for.”

Mr Entsch said the family had been offered repatriation to Sri Lanka.

“I would support an application for them to come back with their Australian-born children to settle in Biloela, but they have to come in through the normal process. Do it through the appropriate channels,” he said.