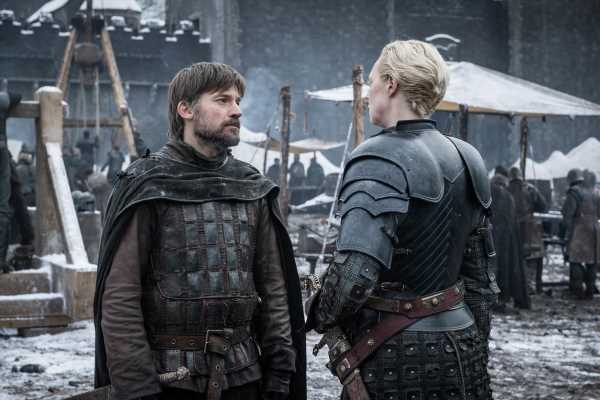 Jaime Lannister has come a long way since his days of throwing young, innocent boys out of tower windows — or so we thought until he opted to ditch Brienne at Winterfell and head back to King’s Landing to be with Cersei. But before you write off this character for good, there are a few Game of Thrones Reddit theories about Jaime Lannister you need to hear about first. Because while his decision to leave Brienne and once again flock to Cersei’s side may seem cruel and disappointing, there could be an underlying reason for his actions that you have yet to consider.

Throughout these past eight seasons, most of Jaime’s actions have been motivated by one goal and one goal only: to be with Cersei. He may not be as cold and calculating as his maniacal sister, but she definitely hasn’t been a great influence on him. And while it seemed like he was trying his best to move on and leave the past behind him, learning from Sansa that Cersei’s life could be in danger brought back old and familiar habits. He needs to go to her, despite Brienne’s pleas for him to stay in Winterfell. However, there are still a few different ways this storyline could play out. Such as…

Reddit user MalignantRacism thinks it’s possible to take Jaime’s decision at face value and believe that he really is just going back to be with Cersei without any sort of hidden agenda. That would be understandably disappointing, especially given how much time the writers have spent attempting to redeem this character. But Cersei has always been Jaime’s biggest weakness, so it’s possible the storyline could go in this direction.

However, there are many like Reddit user PickedPit who believe that Jaime’s ultimate reason for returning to Cersei will be to kill her. He knows Cersei will stop at nothing to maintain the throne, which means millions of innocent lives could be lost. And what did Jaime do the last time a ruler threatened mass genocide? They call him Kingslayer for a reason.

It’s Not His Plan, But He’ll Do It To Save A Life

Reddit user jme2424 doesn’t think Jaime is returning to Cersei with the intent of killing her, but has come up with the ideal ending of how this should all play out: somehow Brienne ends up fighting in the King’s Landing battle, Cersei orders Jaime to kill Brienne, he delivers his iconic line: "The things I do for love," but instead of killing Brienne, he stabs Cersei instead. It would definitely be an epic way for this character to come full circle.

Cersei has been on Arya’s kill list since the very beginning and while it would seem strange to have her kill both the Night King and Cersei, this would definitely be a unique way of going about doing it, especially since it would sorta make the rest of Cersei’s prophecy come to pass. Maggy the Frog told Cersei in the Game of Thrones books that the valonqar will choke the life out of her. (Valonqar is High Valyrian for "little brother.") But prophecies in this saga are rarely ever straightforward, which is why Reddit user haddock67 predicts that Arya will be the one to take Cersei down for good, but she’ll do so by wearing Jaime’s face, allowing her to get close enough to queen to kill her.

Jaime Will Join The Night’s Watch

It’s unclear whether or not the realm really needs a Night’s Watch anymore now that the Night King has been defeated, but Reddit user Moist_Slippers thinks that once Jaime kills Cersei, he’ll be sent to live out the rest of his days in the North and become the next Lord Commander of the Night’s Watch. It seems unlikely that Jaime will make it out of this series alive (he always said he wanted to die in the arms of the woman he loved), but if he somehow defies all the odds and survives, this could definitely be one way for his story to go. After all, the Lord Commander is basically just like serving in the Kingsguard, but with more snow, right?

Either way, the Battle of King’s Landing is sure to bring about many more casualties. We’ll just have to wait and see if Jaime is one of them and if he’ll end up taking Cersei down with him.