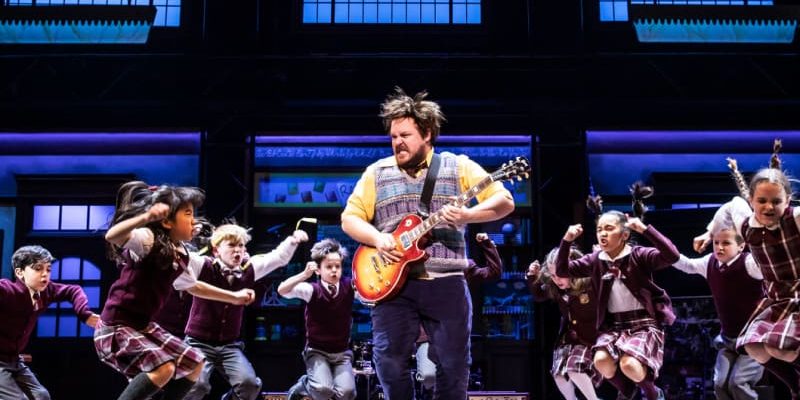 Andrew Lloyd Webber’s School of Rock opened in Melbourne at the weekend. It’s an unalloyed delight – a slick, family-friendly musical with a big rock sound and the luxury of two casts for the price of one. 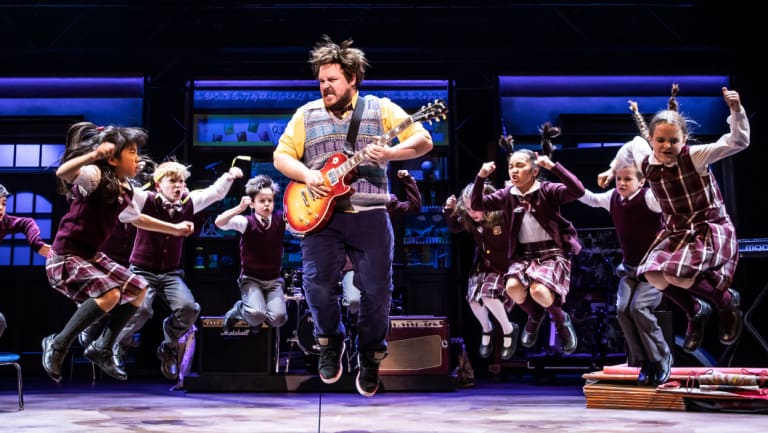 Based on the 2003 comedy film starring Jack Black, the musical rides high, in this production, on a stellar line-up of musical theatre performers, playing opposite a children’s cast with more cuteness, energy and talent than anyone could possibly resist.

Dewey Finn (Brent Hill) is a fat man-boy whose dream of being a rock star has been crushed. He’s just been dumped from his band, he’s terminally unemployed, and scumming a rent-free room from his bestie, Ned (Zach Pidd) – a fact Ned’s wife Patty (Nadia Komazec) deeply resents.

To solve his money problems, Dewey intercepts a job offer meant for Ned, impersonates him, and starts teaching at a prestigious prep school called Horace Green. Comedy erupts as the clueless man-boy meets the children of the 1 per cent, most of them perfectly presented little swots drilled to succeed in the game of life.

Dewey’s unorthodox education methods encourage his young charges to let their hair down, and when he discovers they all play instruments, he devotes every class to rock’n’roll and gives them a mission: to compete in and win a local battle of the bands, while keeping the uptight principal (Amy Lehpamer) and a bunch of even more uptight parents happy.

Hill is a natural for the Jack Black part and takes to the goofy humour with a slacker charm that keeps the whole rambunctious train rolling along. Winning comic acting is matched by gutsy vocals and impressive choreography, and there’s a particularly daffy appeal to the rom-com subplot with Lehpamer, who transforms from starchy educator to secret rock chick with relish.

If the adults are well-cast, and the ensemble of parents and teachers effortlessly co-ordinated, moving through the show almost as a gestalt entity, it’s the children who’ll steal the show every time, especially if they perform as brilliantly as they did on opening night.

It feels unfair to single any of them out. There are three rotating casts. The one I saw was so attuned to each other’s performances, so disciplined in ensemble numbers, and kept such a perfect balance between individual comic moments and the flow of group scenes, that you couldn’t help adoring them all.

Suffice to say, the X-factor is high. It’s a thrill to see a comic rock musical where the stars of the future get to strut their stuff in a technically perfect commercial production with all the bells and whistles. You won’t leave without a smile on your face, and kids will love you forever if you take them over the summer hols.