When NBC’s Timeless was canceled after its first season, an intense internet campaign led to its renewal for a second season. But after Season 2, the peacock network canceled the series again, leading to another outcry from Clockblockers, AKA fans of the series. Thankfully, NBC relented again, if only for some closure. The Timeless two-hour finale movie will air on Dec. 20, wrapping up the series once and for all, and according to the cast, fans will get the answers they crave.

The end of Season 2 saw numerous casualties for our time travelers Lucy, Wyatt, and Rufus (Abigail Spencer, Matt Lanter, and Malcolm Barrett, respectively). Lucy’s mother Carol and their Rittenhouse-founding ancestor Nicholas took bullets from Emma, the Rittenhouse operative who seems to be going rogue. The team headed back to 19th-century San Fransisco to rescue Jiya (Claudia Doumit), but one of her visions came true, and Rufus died from a gunshot wound as well. In the last moments of the finale, however, a new Lifeboat time machine appeared in their bunker and a war-weary Lucy and Wyatt appeared from the future asking, "You guys wanna get Rufus back or what?" breaking all the rules the show had previously presented about encountering oneself in other timelines, and leaving us with a wild cliffhanger.

From the trailer below, it looks like Rufus does get saved (yay!), that the two-hour finale movie takes place over Christmas (check out Agent Christopher in that Santa hat and ugly sweater!), and the team heads back to the Old West. But what else can we expect?

At an NBC press event, Bustle sat down with Spencer, Lanter, and Barrett to get some answers. But they emphasize that the biggest takeaway from the special should be that these final two hours are a gift to the fans who have stuck with them throughout the show.

"It was for them. It literally was written and was thought of as a love letter to the fans," Spencer says. "I burst into tears at the end of the table when we wrapped. A little bit of me was like, ‘Could this be the end?’ We’re going into our third year of being together and Timeless has been a part of my life, and I didn’t realize what a big part of my life it was."

"It is the most fan-friendly finale of anything ever that I’ve ever been a part of," Barrett adds. "If I made three jokes on Twitter, those three jokes are in the movie if the fans liked them. And you know what? I’m glad they did it, and I’m glad we did it. I think we all wanted that."

"But the finale’s good!" Lanter insists, despite its fan service. "There are actually a couple of moments that are specifically built-in for our Clockblockers, and they’ll pick it up. It’s a subtle nod to them," he says. 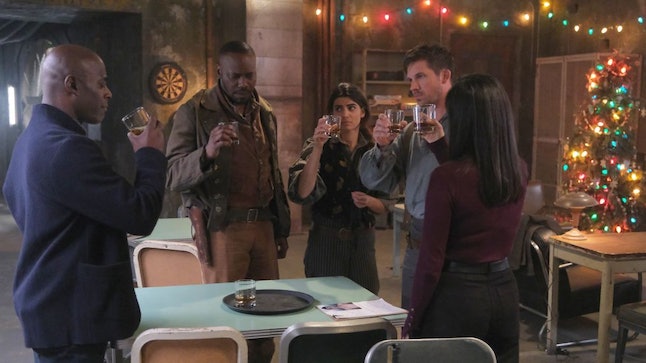 Though the cast couldn’t reveal much about what happens in the TV movie, the trailer does offer a definite holiday theme, and it looks like the cast takes a trip to the Old West, though there’s plenty more we don’t get from the preview, the cast says.

"We go to two different time periods. We go international, which is something that we don’t do often," Lanter says. "So, that was pretty unique and fun. Both time periods are very unique feeling, they’re very different. We’re dressed totally different. It’s a different kind of story, and it’s built around a couple of big events as opposed to one person. It’s gonna be good."

"There was so much story to tell and we knew people were still hooked," adds Barrett. "So I think the finale will have a lasting effect. It will go down as this great holiday story."

"It was special," Spencer adds. "Matt, Malcolm, and I together was special. I think collectively, the three of us at the forefront of a show that people just love so much is invigorating, encouraging ,and rightfully feels very grateful to the fans; we just wanna do a good job for them."

But the big question is whether or not the series ends on a definitive note, or if the movie leaves open the possibility that the time traveling trio will return for more adventures. After all, Clockblockers came through twice before, can they do it again? If the movie’s viewership persuades NBC to revisit the series, would they have a way into more story?

"We tie a lot of loose ends, but in some ways it’s left ambiguous and left open," says Lanter. "Time travel, the idea of time travel, is larger than these three people. I think it’s a kind of clever way to do it. The writers did a really great job of keeping things clever and smart, and trying to give a little closure."

Does that mean a happy ending for potential couple Lucy and Wyatt? And for Jiya and Rufus? "Fans are going to be happy," Lanter adds, "and I think they’re going to get some closure that they want." What Timeless fans really want is for the series to get another magical renewal. Clockblockers, let’s hope for a Christmas miracle.