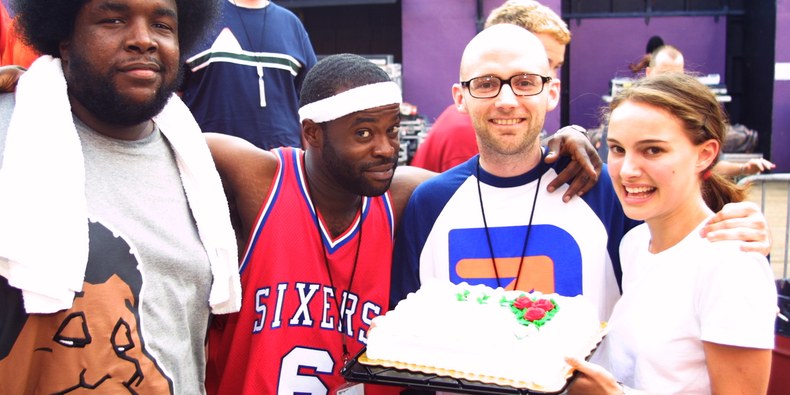 Pioneering electronic musician (and famous vegan) Moby, born Richard Melville Hall, has a new memoir coming out next month, titled Then It Fell Apart. The book, which covers Moby’s rise to fame, struggle with addiction, and subsequent journey to sobriety, is filled with priceless anecdotes, which Page Six generously excerpted today. Among our favorites? The story of how a young, Play-era Moby met Natalie Portman at a show in Austin, Texas.

After playing a set, Moby was told that Natalie Portman was waiting for him at the backstage door. “I walked to the door, sure that this was a misunderstanding or a joke, but there was Natalie Portman, patiently waiting,” he wrote. “She gazed up at me with black eyes and said, ‘Hi.’ As if this were normal, as if we knew each other, as if movie stars randomly showed up after my shows.”

They quickly began dating, and went to the MTV Video Music Awards together just a week after meeting. It seems Moby, uh, liked being with a celebrity. “I’d only had two drinks,” he wrote. “But I felt like I’d swallowed a distillery full of joy … I found that my own burgeoning fame was like warm amber, encasing me with a sense of worth I’d never felt before.”

Moby and Portman broke up but stayed friends, and she even brought her Star Wars castmates to see him in concert. The sole public visual evidence of their relationship is this hilarious photograph (above) with the Roots, shot at a concert on Long Island. Why is Moby holding a birthday cake, one that looks suspiciously un-vegan? It’s unclear.

Then It Fell Apart contains a number of outlandish celebrity anecdotes, including a story about Russell Crowe screaming at Moby for no reason and nights out with David Bowie. Moby also wrote about a 2001 night with friends Charlize Theron and John Taylor of Duran Duran. He invited them back to his dressing room, but Theron refused, telling Moby that Andy Dick was inside, and that things weren’t pretty.

When Moby went inside, he saw Dick “perched on a table with his pants down around his ankles, squatting over a vegan end-of-tour cake that my managers had given me.” Dick’s friends were chanting, “Poop! Poop! Poop!”

Being a celebrity was so much better before smartphones.