There’s so much to love about A Simple Favor: Blake Lively’s delicious turn as the enigmatic, gin-swigging Emily; Anna Kenrick’s pitch perfect performance as the tightly-wound Stephanie; the plot twists; the references that are equal parts Hitchcock and Gillian Flynn; and of course those gorgeous clothes. A Simple Favor costume designer Renée Ehrlich Kalfus is to thank for those memorable outfits, which include everything from tearaway dickeys to Grace Kelly dresses and casual daytime tuxedos. But while Kalfus is thrilled by the acclaim these eye-popping looks have earned, she’s also frustrated by by the assumptions people make about contemporary costumes.

"Actors are not walking into the movie in their own clothes," the designer tells Bustle. You would think such a simple, declarative statement would be common sense, and yet there persists within audiences — and even the film industry itself — an assumption that period costumes are somehow more difficult or ‘worthy’ than contemporary designs. "I think it’s a bit provincial, honestly," Kalfus says of the attitude.

The Oscars in particular heavily favor period designs. Their Best Costume Design category is almost always filled with titles such as The Great Gatsby, Anna Karenina, and Marie Antoinette and films that take place in modern times are much rarer in the category. In fact, the last contemporary film to win Best Costume Design was 24 years ago: 1994’s The Adventures Of Priscilla, Queen Of The Desert — which is still a very "costume-y" film filled with drag queens in fabulous gowns and wigs.

"In some ways, you don’t want them to know what the sweat is, but on the other hand, I really wish that contemporary movies, which are just as hard to make [as period pieces], were understood," Kalfus says. "I don’t know how you do that other than you asking me that question and maybe somebody’s going to read this and say, ‘Yeah, why aren’t we looking at that and saying it’s every bit as worthy?’"

Of course, "doing period pieces are always a costume designer’s dream, that’s what we live for," Kalfus admits. "In period pieces, you have flair and you have fabric and you have brocades." Part of the attraction towards these period films — and they reason they tend to be deemed as more "award-worthy" — probably has to do with the sheer amount of work involved in sewing costumes from scratch rather than assembling them from pre-existing pieces.

But still, having worked on both, Kalfus is of the opinion that period films are "easier, because everybody trusts you as a designer a little more to do your research and bring it to the project — whereas contemporary costumes are much harder. They’re very, very subjective. It’s harder to find a character like that, so it becomes a more collaborative issue where you say, ‘What is the tone? How do you want to tell this? How are you gonna shoot it?’"

In one sense, costumes are essentially exposition, but without the benefit of words; in mere seconds, a costume designer has to "introduce a character and define who they are, where they live, what they’re doing, where they’re working. It can be very subliminal," Kalfus explains.

For example, the "cutesy, we-can-do-this-together-and-everything’s-gonna-be-fine attitude" projected by Stephanie’s clothes turns out to be a "façade" of perfection, "which is obviously counter to her incredibly troubled life." To achieve this look, Kalfus found and followed actual mommy bloggers online and altered pre-existing pieces or sometimes even built Stephanie’s clothes from scratch. "Even if it needs to look ‘off-the-rack,’ it still needs to exist within the framework" the designer has envisioned for the character — which for Kalfus, in this case, involved a lot of DIY cats on collars and pom-poms on sweaters.

For Lively’s character, her clothes acted as even more of a disguise. "She has so many layers of deception, and then taking them off is also a way of revealing her character," Kalfus says of Emily. "She was in hiding, she layered herself in this sort of armor to make it through the day." For Emily’s look, Kalfus was inspired by both glamorous movie stars like Lauren Bacall and the gender-bending photography of Helmut Newton. All of this created a tension between femininity and masculinity, between modernity and timelessness, between strength and vulnerability, between grounded realism and heightened fashion. 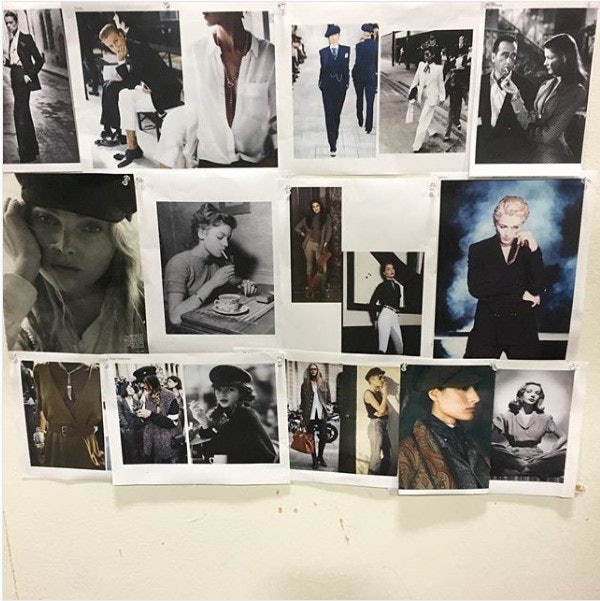 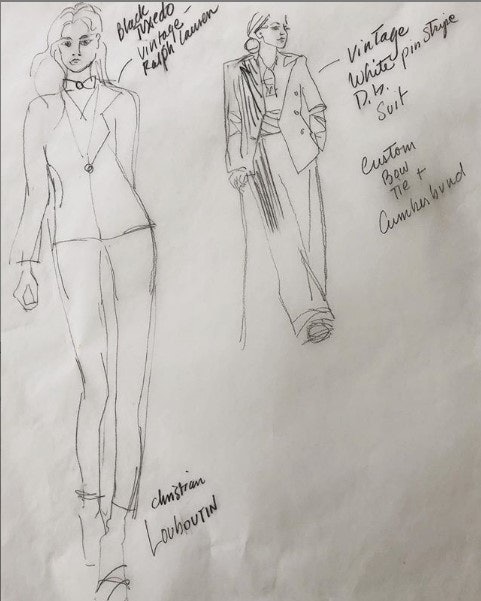 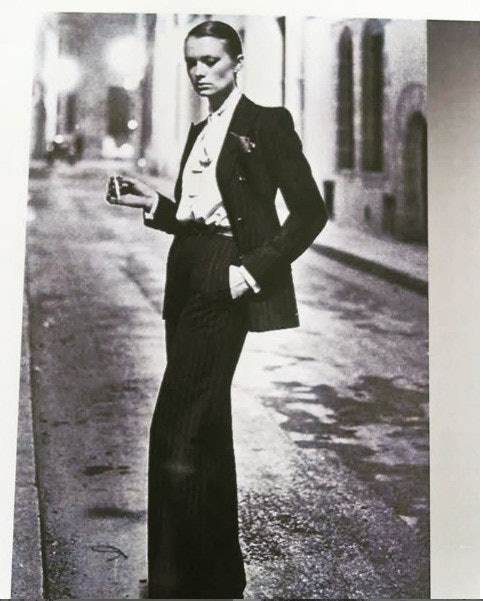 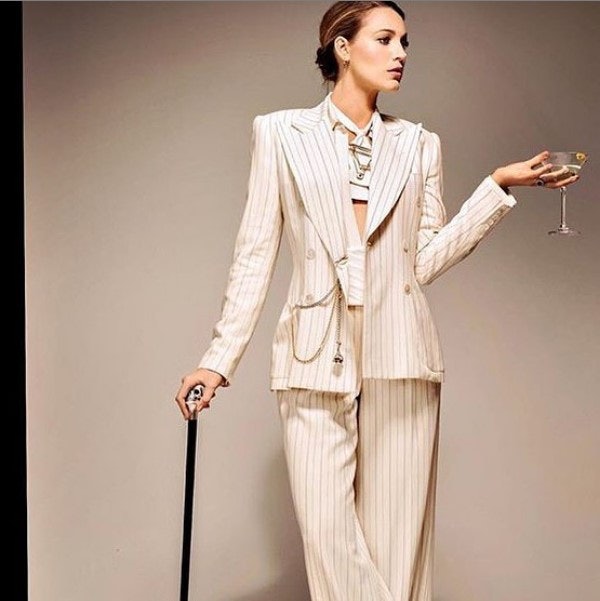 While Kalfus is currently receiving raves for her contemporary Simple Favor designs, she has plenty of experience in period films as well, having designed the costumes for such acclaimed films as The Cider House Rules, Snow Falling On Cedars, and Chocolat. But even when tackling these period projects, she still tries to bring her heightened sensibilities and bold instincts to her designs.

2016’s Hidden Figures, set in the 1960s, earned Kalfus an award for Excellence In Period Film from the Costume Designers Guild over contenders like Jackie, Florence Foster Jenkins, and a movie literally called The Dressmaker. Before starting work on the fact-based historical drama, Kalfus met with director Theodore Melfi, and together they agreed that the story was so contemporary-feeling, they wouldn’t go all "fusty and sepia" with the costumes.

"I pushed the limit of color and style and made those clothes very heightened for that period," Kalfus reveals. "The shapes and everything were pretty true to the period; but when you study something really well, you can also toss it away for the benefit of the story. There was a certain decorum to the early ’60s in terms of girdles and length of skirt and rules, and I wanted it to be more voluptuous — and then take the men and just make them sort of black-and-white, monochromatic, very staid. And that created a sort of painterly contrast that was really effective." 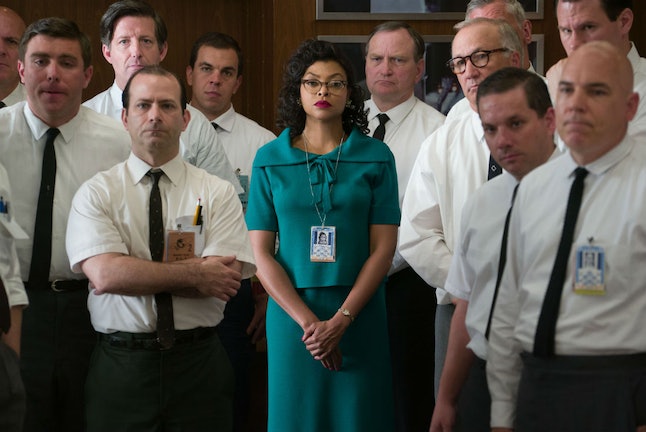 For Kalfus, her ideal is to "push something that you yourself are uncomfortable with… and then have an actor who gets it and can really wear it." Fortunately for her, A Simple Favor had that perfect synergy between designer and actor. "I just kept feeling like I could believe her," she says, praising Lively. "Each day she dressed up and figured out who she was; she just became her character. Putting men’s suits on Blake was just really fun, because you can throw absolutely anything on her" and she’ll still look gorgeous.

Ultimately, executing her vision so successfully was a collaborative effort between Kalfus, Lively, and director Paul Feig (Bridesmaids). "The freedom of the costumes for me was about Paul accepting it, Blake getting behind it, and all of us being there to entertain. It was about, ‘Let’s make this fabulous to look at. Let’s have some real, serious fun.’"

Kalfus had so much fun working with Feig on A Simple Favor, in fact, that she’s reuniting with him on his next film, Last Christmas. The holiday movie is written by and stars Emma Thompson alongside Game Of Thrones‘ Emilia Clarke and Crazy Rich Asians‘ Henry Golding (also a Simple Favor alum). "The team is back, so to speak," Kalfus says. Hopefully Academy voters will be paying more attention this time around.