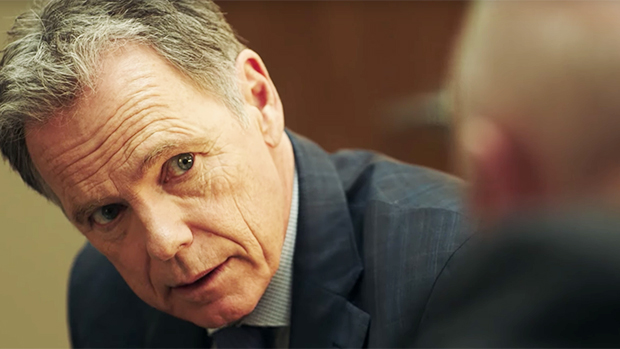 Dr. Bell is in the midst of a brewing scandal in this EXCLUSIVE preview of ‘The Resident’ fall finale. He talks to his lawyer about being blackmailed by Lane with that sex tape. Watch now!

Dr. Bell’s lawyer is waiting for him in his office to discuss something very scandalous in this EXCLUSIVE preview of the Nov. 26 fall finale of The Resident. His lawyer wants to talk about the deposition Bell gave Lane Hunter’s lawyers. Dr. Bell confesses he slept with Lane Hunter “many times” in the deposition. “How many times is many?” Bell’s lawyer asks. “What are you not telling me?”

Bell admits there’s a sex tape involved. “In the legal world there’s a term for this, it’s called a disaster,” his lawyer says. He thinks Bell will be fired and his reputation ruined if this sex tape leaks. Bell believes he’s got a solution. He’s agreed to post Lane’s bail and help her find a good lawyer. He also thinks this will all blow over with Lane, and she’ll be labeled “aggressive” and not a criminal.

His lawyer thinks Bell is just “digging himself a bigger hole.” Lane’s bail is set at $5 million, and the bondsman is going to need 10 percent of that in cash. Bell’s going to have to come up with $500,000. Bell thinks Lane’s going to pay him back with the money she allegedly has in offshore accounts, but his lawyer doesn’t believe that whatsoever. “I’d pay half a million dollars to make this go away,” Bell says.

Also during the episode, Devon’s doubts about his relationship reach a peak as his friends and family gather for his big wedding day. As Chastain’s leading medical device company, Quovadis, continues to succeed, Julian makes a discovery that leaves her uneasy about her involvement in it all. Meanwhile, Conrad continues to work on his relationship with Marshall. The Resident season 2 airs Mondays at 8 p.m. on FOX. The show will return in 2019.