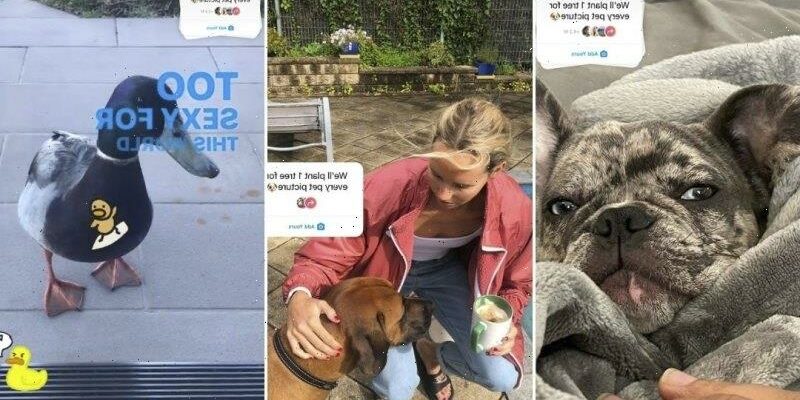 If you’ve been on Instagram recently, you’ve probably pondered the following question: for the love of everything that is holy, who is going to plant all the trees?

Back up. What are you talking about? Sorry. I’m getting ahead of myself. Basically, a peculiar trend has gone bananas on Instagram that involves people sharing pictures of their animals all using the same sticker: “we’ll plant 1 tree for every pet picture”. And because pets don’t get nearly enough attention on social media, their proud parents did the right thing and leapt to action to share the 1513th photo of Bruno and/or Luna. Plus, how good are trees, right?

Show me. Keep in mind there were more than 4 million Instagram users around the world using this sticker by Tuesday morning. But via swimmer Emma McKeon and models Shanina Shaik and Sara Sampaio, here’s a tiny taste of the truckloads of dogs. 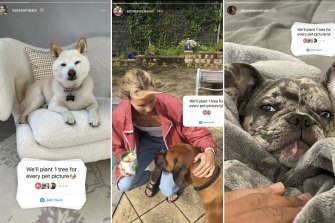 Some non-dogs took part too. Behold, reptiles and a handsome duck. 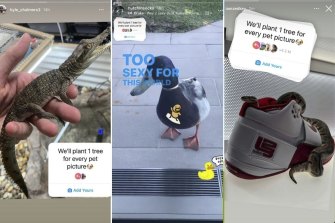 Pets of all kind were welcome.Credit:Instagram

Where are all the cats? Few and far between. One might deduce this means cat people are smarter. (As a dog person, I say this begrudgingly.)

Why did this go so nuts? There are a few things at play that could have propelled the trend. Firstly, fluffy animals. Secondly, the environment has been a major talking point this week thanks to the ongoing UN climate change conference COP26. Finally, Instagram only just rolled out this new feature, called “Add Yours”, on November 2. It allows people to make their own sticker, share it on their Stories and invite other people to use it. You can see it working for, say, people sharing their outfit of the day, or people sharing their experience of the same event. Or, indeed, dog pictures.

Right. So, the trees. Who’s the “we” planting them? That’s where things got murky. I’d love to be able to say that wee saplings are being planted as you read this, but up until Tuesday afternoon, nobody really knew what the flip was going on, who posted and why. Was there some poor soul out there scrolling through dog photos in panicked tears, or foetal-positioned on the floor hyperventilating because they’d just inadvertently promised to plant millions of trees? It seemed unlikely.

And now someone has claimed responsibility? That’s right. A US organisation named Plant A Tree Co has come forward to say it started the campaign. “We immediately realised the post would grow too big and that we didn’t have the resources to plant that many trees, so we deleted it 10 minutes later. Even though we deleted it, the Stories continued to spread out of our control. Our credit for the post was also removed,” a statement reads. The group says it’s now raising money to plant the more than 4 million trees, but still, it seems to be a mammoth goal for a small organisation that has so far planted only 6500 trees since its founding and has relied on necklace sales to fund the effort.

Who’s to say Instagram didn’t secretly start this to drum up publicity for its new feature? There were theories to that effect as it would be quite on-brand for The Zuck (Facebook owns Instagram). But a source has confirmed that this sticker was started by an Instagram user, not Instagram. Clicking on an Add Yours sticker on someone’s post opens up a list of everybody with a public account who has participated, allowing you to see all the photos. However the original author was nowhere to be seen because they removed their post.

What does Instagram have to say about this? The platform’s business model relies on user engagement but it seems this is the trend that got too big for its boots. After mounting speculation that Instagram was behind it, the company made the surprising decision to halt the use of the sticker. A Facebook spokesman says: “The ‘plant 1 tree for every pet picture’ Add Yours thread was disabled to limit misunderstanding around who authored the original post. We’re working on ways to make authorship clearer and minimise confusion moving forward.”

What’s the point in all this? Why do we do anything on social media? It’s been pointed out that, ironically, it’s Scam Awareness Week, but unless scamming now includes adorable ploys to rob people of a few minutes of their time to share and ogle at animal photos, then I wouldn’t call this a scam. Is there any substance to it? Not really. Is it a bit of frivolous fun on a dreary day? Yes. Also, people love to feel like they’re participating in something. Remember last year’s #ChallengeAccepted trend? It involved countless women sharing black-and-white photos of themselves, purportedly to support female empowerment. It was never going to change the world, but it went viral anyway. Because, selfies!

Can I just plant a tree? Please do. Or head to wwf.org.au and support the good people at WWF Australia to plant a few. Just make sure you post a photo of your golden retriever/French bulldog/whippet while you’re at it.