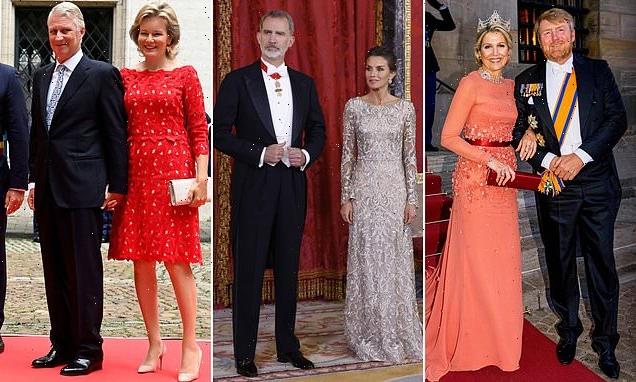 The Queen’s distant European cousins will unite at her funeral: As the Dutch, Spanish and Belgian royal families confirm their attendance, how Her Majesty’s family ties with foreign monarchs date back generations

Royal families of Europe will be travelling to London en masse to pay their respects to the late Queen at her funeral on Monday.

More than just a fellow monarch, the Queen is remembered as a beloved cousin, a ‘role model’ and even ‘auntie Lilibet’ by European kings and queens whose familial ties to the British Royal Family date back generations.

King Felipe VI of Spain, who is the monarch’s third cousin once removed, was amongst the firsts the confirm that he and his wife Queen Letizia will be attending the late Monarch’s funeral at Westminster Abbey.

King Willem-Alexander of the The Netherlands, the Queen’s fifth cousin twice removed, will also attend with his wife, Queen Maxima. 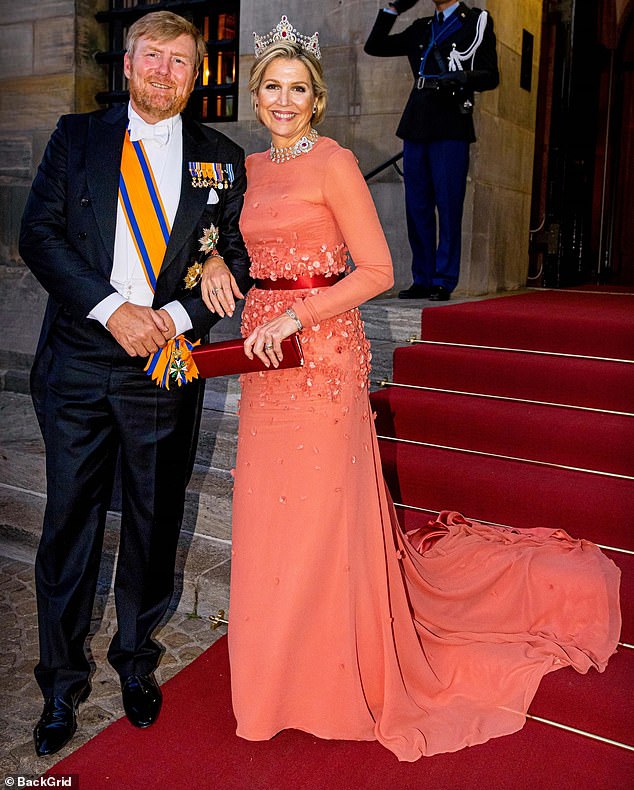 More than just a foreign royal to them, the Queen has been remembered as a ‘role model,’ a beloved cousins and ‘auntie Lilibet’ by Europe’s royals who will be coming to her funeral next week. Pictured: King Willem-Alexander of the Netherland, who will attend with his wife Maxima, right, is a Queen’s distant cousin 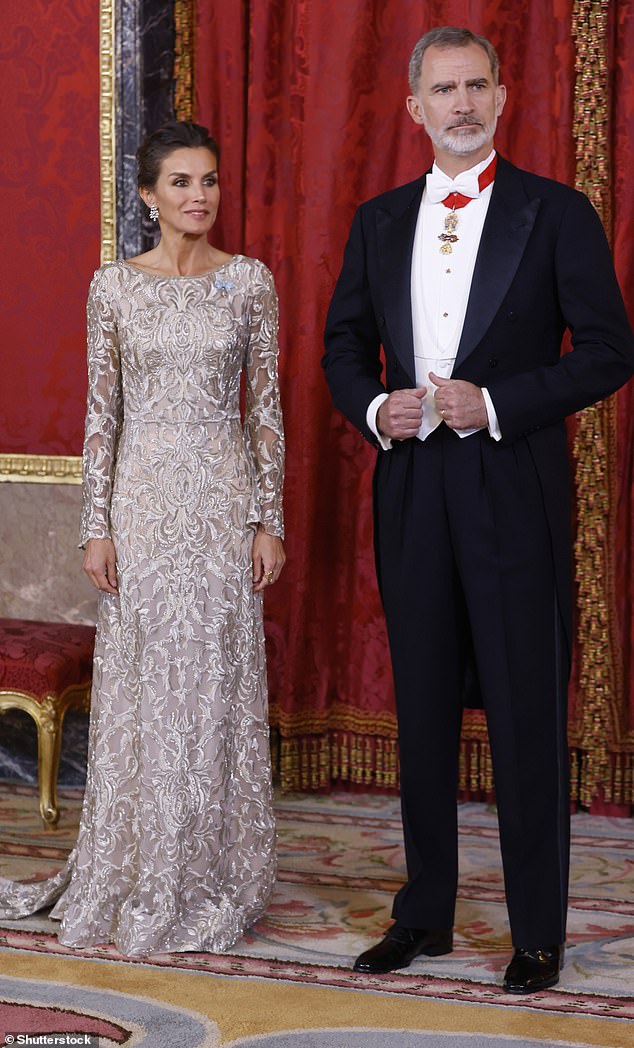 King Felipe VI of Spain, who wll attend with his wife Queen Letizia, was the Queen’s third cousin once removed through his father Juan Carlos, who is the grandchild of Victoria Eugenie of Battenberg, the youngest daughter of Queen Victoria 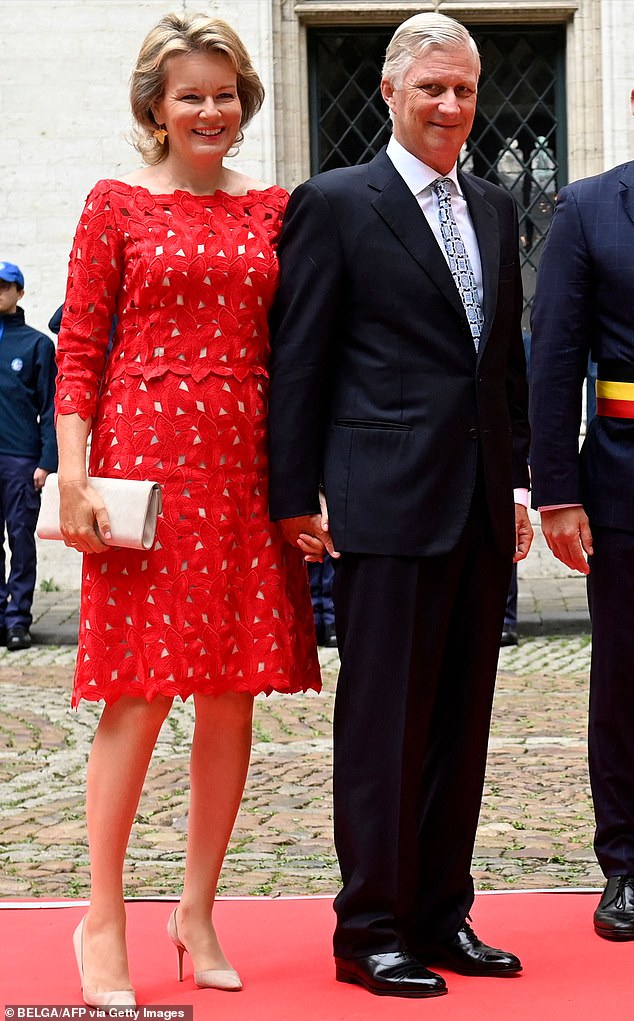 King Philippe of Belgium is related to the Queen because he is the descendant of Leopold I of Belgium, who was the uncle of Prince Albert, Queen Victoria’s husband

It thought King Harald of Norway, who is the Queen’s second cousin, will be attending the ceremony, as will her distant cousin Margrethe II of Denmark, who modified her own jubilee celebrations last weekend as a mark of respect for the late Queen.

The late monarch was tied to these great European families through her ancestor Queen Victoria, her grand-great grandmother.

With 14 aunts and uncles, the Queen’s had 31 first cousins alone, and many, many more second and third cousins.

Game of thrones! How Queen Victoria sat at the centre of a spider’s web of European royal connections

With nine children of her own and 42 grandchildren, Queen Victoria sat at the centre of a spider’s web of royal connections across Europe.

Her husband Prince Albert of Saxe-Coburg and Gotha had dreamt of a Europe held together by family connections, and Victoria was determined to carry out his wishes.

They married their offspring into royal and noble families across the continent, earning Victoria the nickname ‘the grandmother of Europe’.

Eight of their children married into royal houses, starting with Vicky, who wed the Crown Prince of Prussia.

But after Albert’s death in 1861, Victoria retreated from public appearances and became known for wearing black and living in mourning.

King Felipe VI, who called the Queen ‘auntie Lilibet’ when he paid her tribute on Friday, was the Monarch’s third cousin’s once removed.

That is because the Spanish royals father, King Juan Carlos, is the son of Infante Juan, Count of Barcelona, who was the son of Victoria Eugenie of Battenberg, Queen Victoria’s granddaughter via her youngest child, Beatrice.

Meanwhile, King Willem-Alexander of the Netherlands, who was the first to RSVP to the Queen’s funeral, is the Queen’s fifth cousin once removed thanks to an ancient connection in their family tree.

Willem-Alexander is a descendant of Princess Carolina of Orange-Nassau, who was the daughter of f William IV, Prince of Orange, and his wife Anne, Princess Royal.

The Queen is lined to Princess Carolina through her paternal grandmother Queen Mary, wife of King George V, who was a descendant of her.

King Carl XVI Gustav of Sweden is one of the European royals with the closest ties to the Queen.

He is a great-great-grandson of Queen Victoria and was a third cousin of the late Monarch.

That is because the Swedish King is the great-grandson of Queen Victoria’s son Prince Arthur, and is also related, on her mother’s side to Victoria’s eighth son, Prince Leopold, Duke of Albany.

King Harald of Norway shared a similar link with the Queen and was also her second cousin. 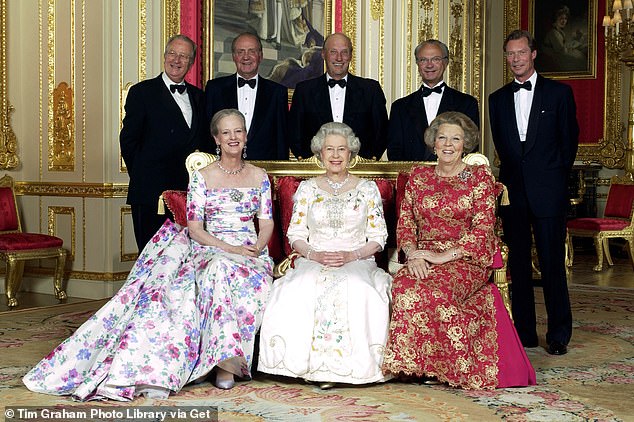 Pictured: the Queen in 2002 with Queen Margrethe II of Denmark, left, Queen Beatrix of the Netherlands, right. Back row: King Baudouin of Belgium, King Juan Carlos of Spain, King Harald of Norway, King Carl XVI Gustav of Sweden and Grand Duke Henri of Luxembourg. She was related to all of them 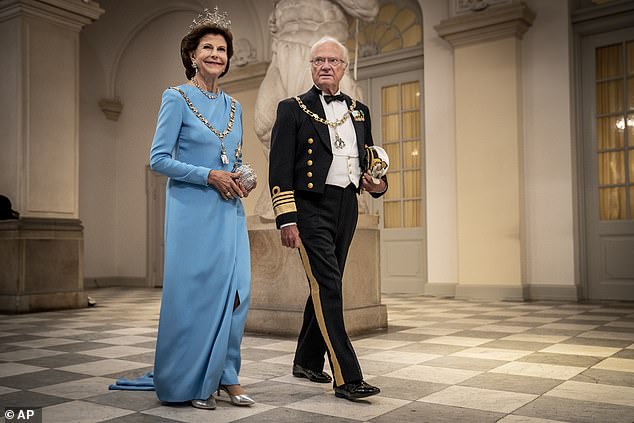 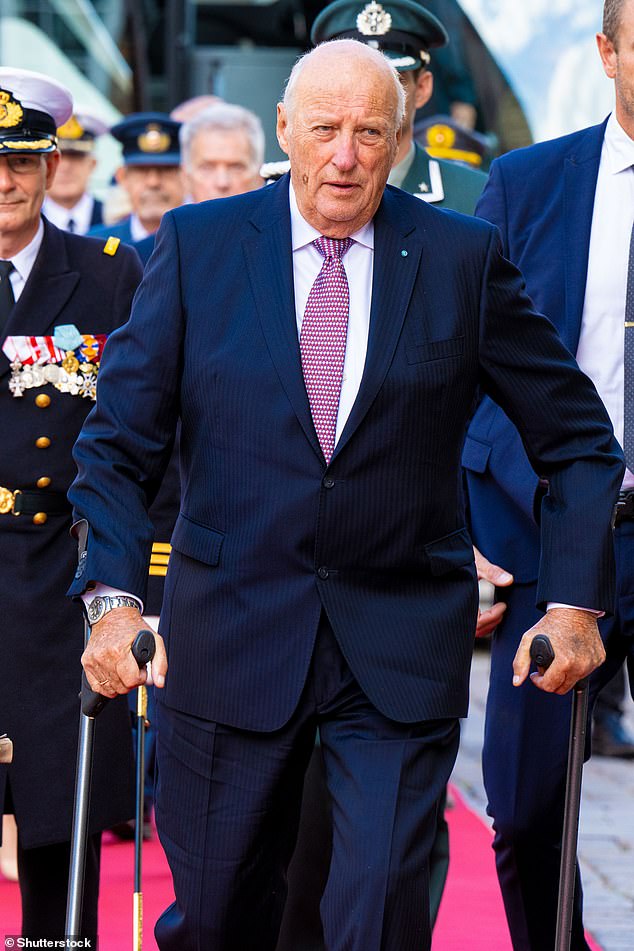 King Harald of Norway was also related to the Queen and was also her second cousin. They shared the same great-grandparents, King Edward VII and Queen Alexandra 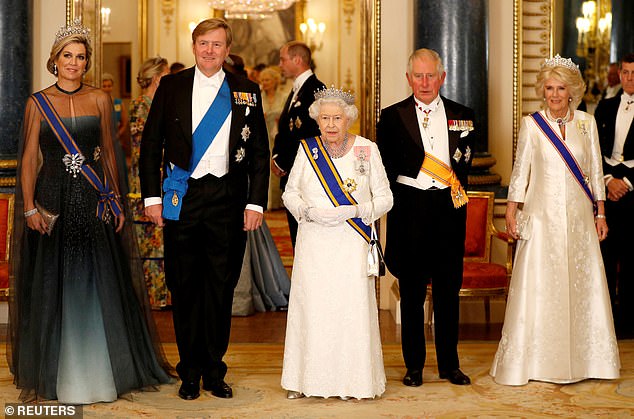 Queen Maxima and King Willem-Alexander with the Queen, the King and the Queen Consort in 2018 at Buckingham Palace

Through the Victoria connection, it is also believed that the Monarch was cousins with Queen Margrethe II of Denmark.

Margrethe is descended from Queen Victoria and her third cousin Christian IX, which means she is was a distant cousin of the Queen.

She is also the first cousin of Carl XVI Gustav through Victoria’s granddaughter, Princess Margaret of Connaught.

Margaret of Connaught was the daughter of Queen Victoria’s third son, Prince Arthur, Duke of Connaught. She was also Queen Margrethe’ and Carl Gustav’s great-aunt. 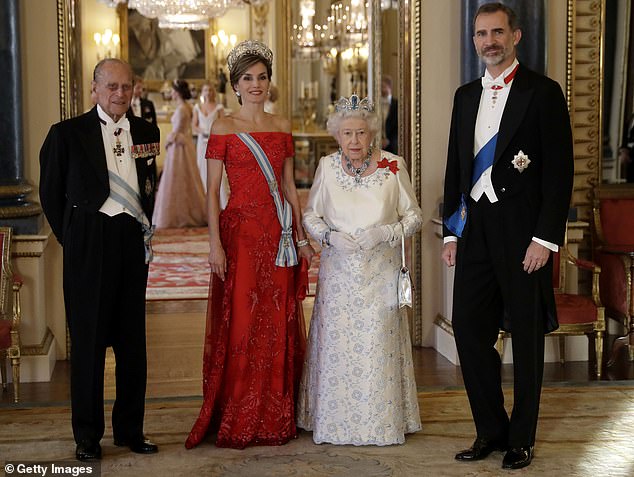 The late Duke of Edinburgh with Queen Letizia of Spain, the Queen and King Felipe VI in London in 2017 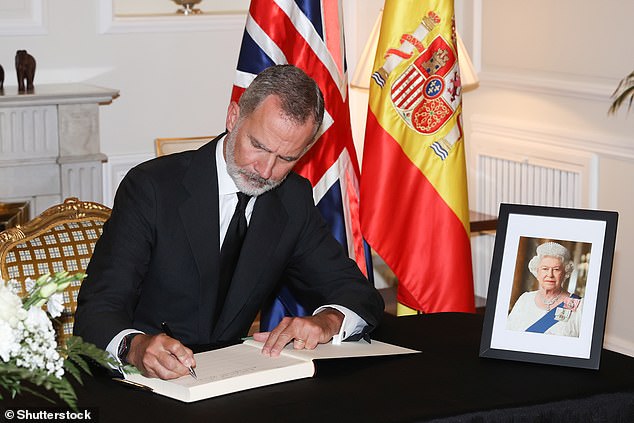 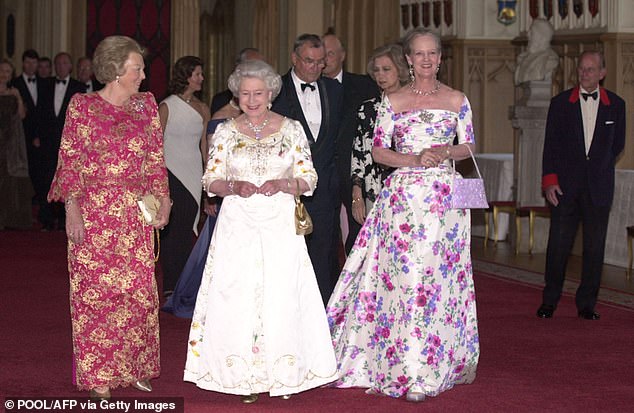 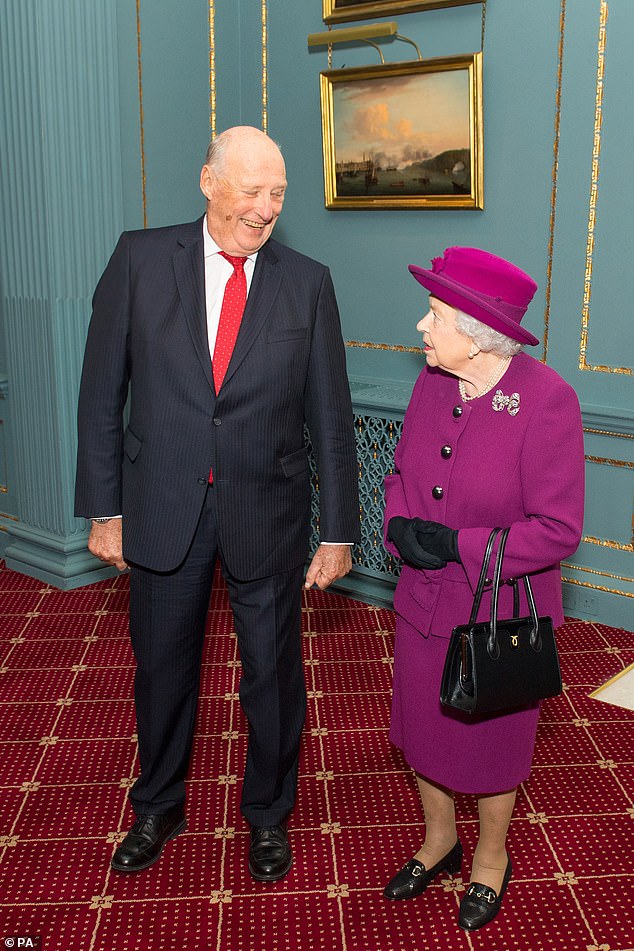 King Philippe of Belgium also had distant ties to the Queen through both Queen Victoria and her husband Prince Albert.

That is because he is the great-great-great-grandson of Leopold I, the first King of Belgium, who was both Victoria and Albert’s uncle.

Albert’s father Ernest I, Duke of Saxe-Coburg and Gotha was the brother of Henri’s great-great-great grandfather, Leopold I.

Joe Biden and Jill Biden, President and first lady of the United States