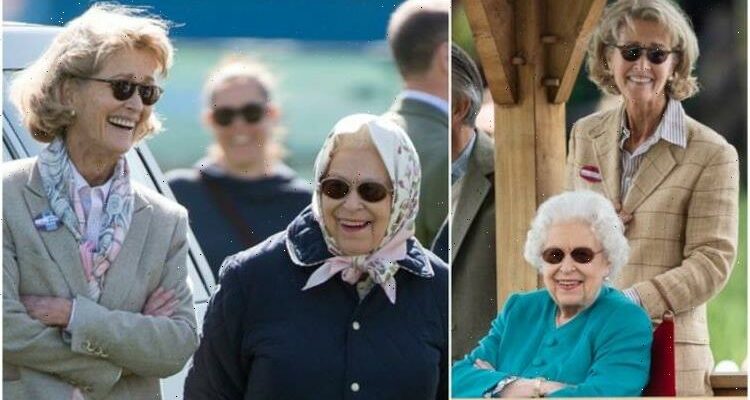 From her ladies-in-waiting to her personal dresser, the Queen has a number of confidantes in her inner circle, aside from her immediate family members. In June 2021, she enjoyed the Royal Windsor Horse Show where she was joined by Penelope Knatchbull, Countess Mountbatten of Burma. Penny has always been one of the Queen’s closest companions, and was even one of 30 people to attend Prince Philip’s funeral in April 2021.

Lady Susan Hussey, Baroness Hussey of North Bradley, is one of the Queen’s ladies-in-waiting and travelled with the monarch to the Duke of Edinburgh’s funeral service.

Baroness Hussey has been a friend to the Queen since 1960 when she became her Woman of the Bedchamber.

She was initially employed to respond to letters after Prince Andrew’s birth.

She is the youngest daughter of the 12th Earl Waldegrave and Mary Hermione, Countess Waldegrave.

Lady Susan, who was married to the late BBC chairman Marmaduke Hussey, is godmother to Prince William and reportedly close friends with Prince Charles.

Susan Rhodes is another Queen’s lady-in-waiting, and accompanied the monarch to the Remembrance Sunday service in November 2020.

Susan is married to Simon Rhodes, the son of the late Margaret Rhodes.

Margaret, who died in 2016, was the Queen’s maternal cousin and a playmate of the young Princess.

She was also her bridesmaid at the Queen’s 1947 wedding and served as Woman of the Bedchamber to the Queen Mother from 1991 to 2002.

Angela Kelly, the British fashion designer, has served as the Queen’s personal dressmaker since 2002 and creates all of her outfits.

Angela shared some sweet anecdotes about her time working with the monarch in her 2019 book, ‘The Other Side of the Coin: The Queen, the Dresser and the Wardrobe’.

Angela revealed she is the royal aide who helps to break in the Queen’s new shoes as they share the same shoe size.

The Queen’s bloodstock and racing adviser is John Warren, who took over the role from his father-in-law, Henry Herbert, after his death in 2001.

He recently accompanied the monarch at the Royal Windsor Horse Show and Royal Ascot.

The Queen is close friends with Sir Jackie Stewart, the British racing driver and attended his 80th birthday party in 2019.

Sir Jackie has joined the royals for Christmas celebrations at Sandringham over the years and is also godfather to Zara Tindall.

Lady Pamela Hicks, 92, has been close with the Royal Family for many years.

She is the daughter of Lord Louis Mountbatten and the great-great-granddaughter of Queen Victoria, making her the cousin of Prince Philip and second cousin to the Queen.

Lady Pamela was also one of the Queen’s bridesmaids in 1947, before serving as her lady-in-waiting, accompanying the Queen on royal tours.