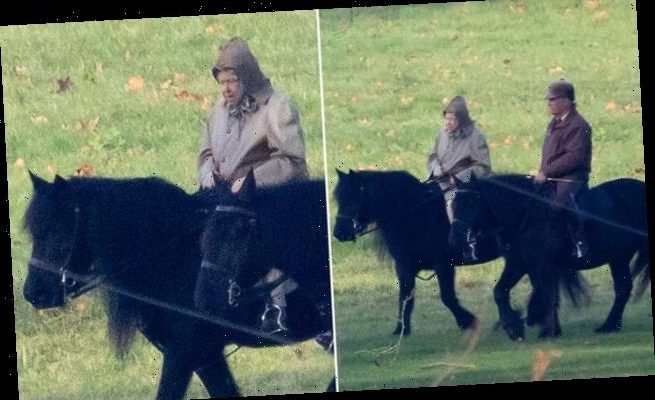 Long to rein over us: The Queen wraps up warm as she is seen horse riding on her favourite black pony at Windsor Castle

The Queen wrapped up warm as she was photographed enjoying some down time horse riding in Windsor today.

The monarch, 94, donned a cosy tan coloured coat and head scarf as she rode out on her favourite black horse alongside her head groom Terry Pendry.

The 94-year-old, who has been a passionate horse lover and breeder of thoroughbred racehorses throughout her reign, is reported to have taken daily rides throughout the Covid-19 crisis.

It marks the second time in recent weeks the royal has been seen out in the saddle. 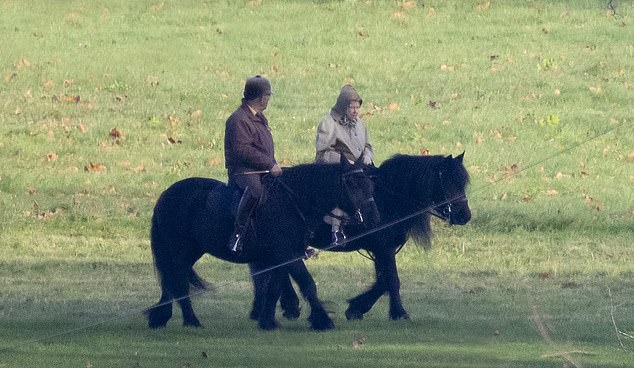 The Queen, 94, wrapped up warm as she took to the saddle of her favourite black pony earlier today in Windsor alongside Head Groom Terry Pendry

It marks the second time in recent weeks the royal has been seen out in the saddle.

Photographs of the Queen out in Berkshire last week marked the first time the royal has been seen riding out in public since February.

Throughout the pandemic, head groom Terry has ensured the royal’s ponies are ready and that he keeps two metres from his boss during their rides.

All protective disinfectant measures are taken, particularly for the horse’s saddle and bridle. 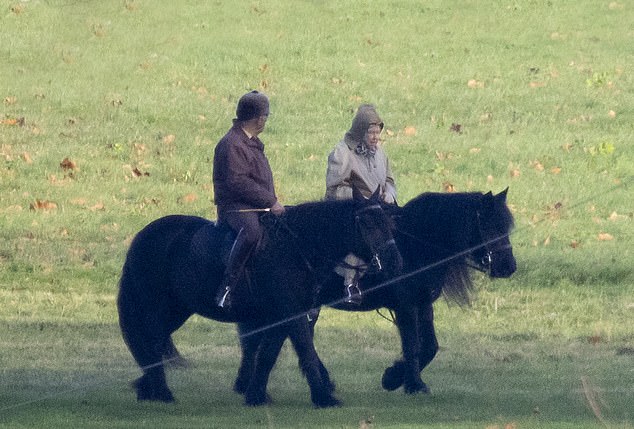 The monarch’s ride of choice is a black pony called Carltonlima Emma, named after the stud near Leeds where she was bred, and the routine gives the queen a sense of both freedom and normality.

A devoted team of 22 staff have been working throughout this year to provide a protective shield around Elizabeth and Prince Philip, which Windsor Castle colleagues are calling ‘HMS Bubble’.

It includes her favourite page Paul Whybrew – with whom she is so comfortable that they often watch TV together, and who co-starred in her James Bond skit for the London Olympics Opening Ceremony – as well as chefs, cleaners and officials.

Led by master of the household Tony Johnstone-Burt and the queen’s private secretary, Edward Young, the team have willingly agreed to live away from their own families for the duration of the lockdown. 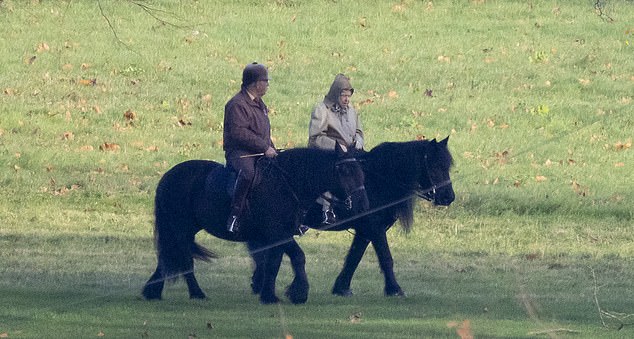 It means they can serve the monarch and her husband – who moved to Windsor from Sandringham, where he has lived for the past few years – without needing protective equipment such as gloves and masks, or to abide by social-distancing guidelines.

The royal is currently isolating at the home with Prince Philip after leaving Norfolk for the month-long lockdown.

It comes after a revolt among workers at Sandringham after they refused to quarantine away from their own families.

It led to the Queen and the Duke of Edinburgh spending two weeks together at Sandringham’s Wood Farm cottage last month rather than in the main house. 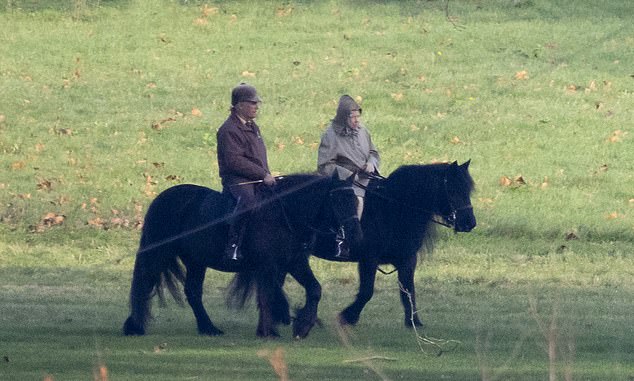 The pair appeared relaxed as they rode out through the grounds of Windsor, with the royal choosing to ride black pony called Carltonlima Emma

It is reportedly hoped that Prince Philip and the Queen both isolating at Windsor will help quell tension, after Sandringham estate workers revolted against a plan for them to stay in a coronavirus bubble there over Christmas.

A team of about 20 employees had been asked to remain on the monarch’s Norfolk estate without their families to support her, Prince Philip and other members of the Royal Family during the festive period.

But the group – said to involve cleaners, laundry and maintenance workers – are believed to have mutinied because they are unwilling to isolate from loved ones for four weeks.