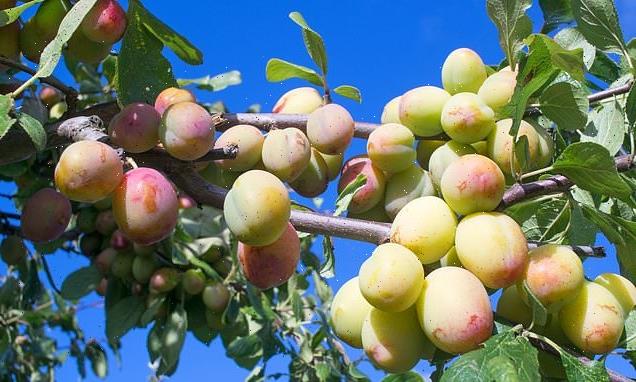 The Queen of Plums: For flavour and sweetness, there’s nothing like Victoria

Supermarkets stock imported plums almost all year round. They look delicious, but even when labelled ‘ripe and ready’, they can be sour and hard as golf balls.

Compare that with biting into a freshly picked, home-grown Golden Gage. Sun-warmed and plump, this plum has a delightful sweetness, juiciness and texture. If gathered when fully ripe, all the subtle flavours are intact.

Britain has a challenging climate for tree fruit. But for dessert and culinary plums, our changeable summers and gentle autumns are perfect. 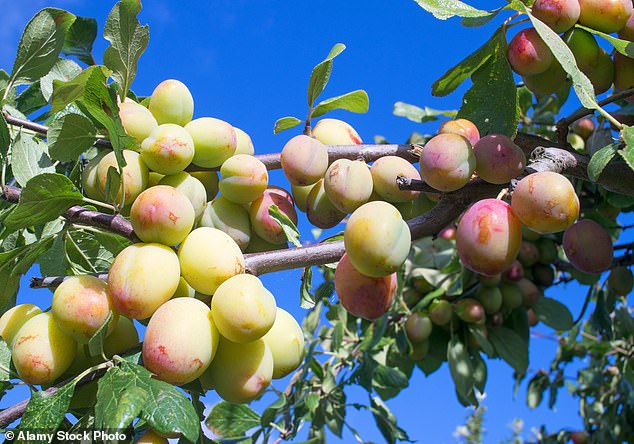 Britain’s favourite plum is Victoria. When left to ripen on the tree, the plump, oblong fruit have brick-red skins and sweet, juicy, amber flesh

The earliest to ripen are cherry plums, Prunus cerasifera, but they have limited value. The earliest true plum arrives in late July: the dark, purple-skinned Rivers Early ­Prolific. Czar soon follows with larger, tastier fruits. Among the latest to ripen is ­Marjorie’s ­Seedling; oblong, also purple-black and ready to pick from late September.

Britain’s favourite plum is Victoria. When left to ripen on the tree, the plump, oblong fruit have brick-red skins and sweet, juicy, amber flesh.

Sadly, most Victoria plums are sold barely half-ripe. They are pink and green, disappointingly hard-textured and bland-­tasting. Given time they will soften and blush. But they will still lack flavour.

A self-pollinator, Victoria will bear fruit without another variety nearby. But yields are higher if there are compatible varieties within bee range.

They’re late-maturing, too. That gives them several more weeks to build sweetness.

Other varieties bring different flavours. The often-overlooked Opal has smallish, rounded fruits which ripen with a purple-pink flush. Though early, it has the sweetness and rich flavour of several late varieties.

For cooking, early to mid-season variety Czar is dual-­purpose. When gently stewed, the dark skins release desirable acidity plus rich colour for desserts, jams and chutneys. It is both self-fertilising and a pollinator for other plum varieties.

The gages are many people’s favourites, and the largest and most luscious is Oullins Golden Gage.

Like its smaller cousin, the greengage, this has round fruits Nation’s favourite: The self-pollinating Victoria has juicy, sweet fruit when fully ripe which ripen to an almost translucent green-gold. It is the sweetest, juiciest and most gorgeously flavoured dessert variety.

Damsons, in contrast, are bracingly sharp. Along with green-gold bullaces, they’re the smallest fruits. Usually too tart to eat raw, both are unsurpassable for cooking.

For a sweet, sharp hit on your toast, Damson preserve beats even the poshest marmalade.

When choosing plum varieties, remember to check for cross pollination. All — even self-­fertile varieties — benefit from unrelated trees nearby. Seek advice on compatibility from a specialist fruit nursery. Good suppliers include pomonafruits.co.uk and orangepippintrees.co.uk.

Plums are usually grown as free-standing trees. But you can also grow them fan-trained on a sunny wall. A south or southwest-facing aspect is best.

Suppliers can advise on root stocks, which dictate the size of the tree. And there is help on the RHS ­website (rhs.org.uk).

Most plums thrive in any welldraining soil. Free-standing plum trees, unlike apples or pears, get by with minimal or no pruning. Just make sure young trees are supported while they mature.