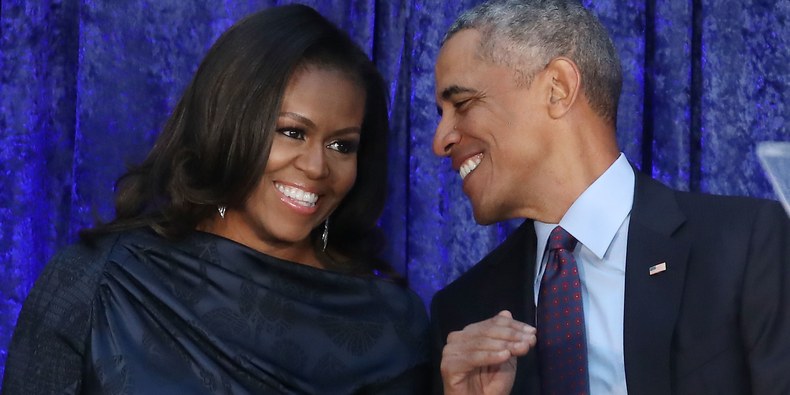 As much excitement as it generated at the time, it's understandable if you forgot entirely about the Obamas' upcoming partnership with Netflix: It was announced nearly a full year ago, and any additional details than those initially provided have had yet to emerge in the months since. But that may have been because they'd all been working too hard to pause for an update, because the one that suddenly popped up on Tuesday was quite robust.

According to Higher Ground Productions, the production company that Barack and Michelle Obama launched last spring, the couple has no less than seven projects in the works with Netflix—a number that's set to grow with even more announcements in the next few months. Whether scripted, unscripted, or documentary, each are meant to reflect the Obamas' aim with their choice and manner of storytelling: "Touching on issues of race and class, democracy and civil rights, and much more, we believe each of these productions won’t just entertain, but will educate, connect, and inspire us all," Barack said in a statement.

In some cases, the educational aspect is more straightforward than others. Falling in that camp is a feature film on Frederick Douglass, and two feature-length documentaries, Crip Camp and American Factory. (The former traces the origins of the disability rights movement, back to a '70s-era summer camp for disabled teens; the latter sees a post-industrial section of Ohio come to terms with its future, after its former General Motors plant passes into the hands of a Chinese billionaire and entrepreneur.)

Bloom, on the other hand, sounds more like an entertainingly informative binge watch. While exploring the hurdles that women and people of color faced in post-WWII America, it's also an upstairs/downstairs drama series, and not of the Downton Abbey variety. It takes place in "the world of fashion" in New York City, arguably the capital of drama in the industry. Written and executive produced by Callie Khouri, who won an Oscar for the screenplay of *Thelma & Louise," Bloom has yet to announce its star, but it's already looking like Lucy Hale, who landed the titular role of Katy Keene, a fashion musical drama spin-off of Riverdale, might be in for some competition. (Especially if Michelle Obama, who's long championed emerging designers, ends up weighing in.)

The other two TV shows Higher Ground has in the works are proof of Michelle Obama's belief that "there's something here for everyone," from preschoolers to avid obituary readers. For those who haven't been making it around to their stacks of New York Times, Overlooked will catch you up on the paper's obit column, whereas Listen to Your Vegetables & Eat Your Parents is more about food and family. Last but not least, there's also Fifth Risk, a non-fiction series about the government's "everyday heroes," based on a book by Michael Lewis (the author of Moneyball and The Big Short.)

As for what the projects that have yet to be announced will look like, well, your guess is as good as any. And if "storytelling" seems like too broad of an approach to television, well, Oprah Winfrey has a reminder for you: These are the Obamas, and "they can do any damn thing they want."

Related: Donatella Versace on Michelle Obama: "If She Ran for President She Would Win"


Michelle Obama in Alexander McQueen at a state dinner in Washington, D.C., January 2011.