The Good Fight doesn’t hesitate to tackle real-life topics, or drop real-life names in the process — which might cause one to wonder if the series’ newest character, Michael Sheen’s Roland Blum, is an entirely fictitious creation or if this character is ripped from the headlines, much like many of the show’s plotlines. While the show isn’t always explicit about the people that the show is imitating, showrunners Robert and Michelle King did not hesitate to reveal to Entertainment Weekly that Roland Blum of The Good Fight is based on Roy Cohn, one of the most infamous figures in American history who was instrumental in some of the most radical conservative movements of the 20th century and 21st century, leaving an impact on the country over 30 years after his death in 1986.

Roy Cohn is sort of like the Forrest Gump of American Conservatism, in that if there was a crucial moment in the political movement’s history, he was likely present or somehow involved. Cohn worked under former Senator Joseph McCarthy, who in the 1950’s claimed that hundreds of "known communists" had infiltrated the State Department. He was a prosecutor in the trial of Julius and Ethel Rosenberg, and most recently (and most relevant to the current political moment), Cohn served as both a mentor and a lawyer to Donald Trump. 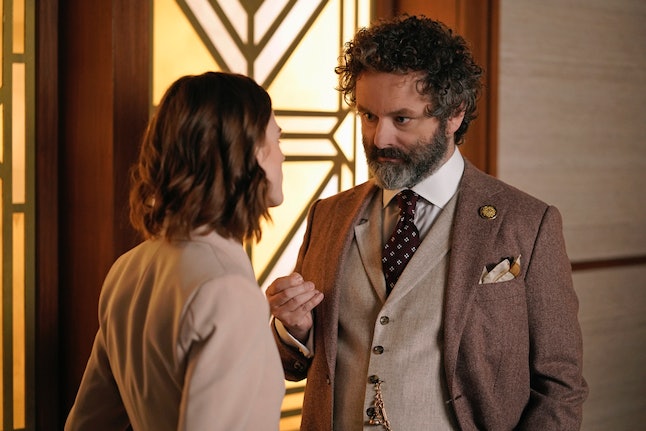 So what does all of this have to do with beloved CBS All Access drama The Good Fight? As King tells Entertainment Weekly, the idea that Blum represented to her is that having a "better story" was more important than a "better fact," which is something the series will explore in the Trump era. Deadline reported that Sheen told the Television Critic’s Association during a panel that he sees the "disruptive" character as "expressing the id of the show." Sheen added, "There is something quite devilish about him. He wants to eat and f*ck and disrupt, and poke people."

While Cohn might not be a point of reference familiar to younger viewers who didn’t grow up under the specter of McCarthyism, or haven’t seen Angels In America — a Broadway play-turned-HBO mini-series that won Nathan Lane a Tony and Al Pacino an Emmy for playing Cohn — there is another point of reference that works just as well and is more relevant in today’s culture.

Roger Stone, who was recently indicted as a result of special prosecutor Robert Mueller’s probe, is another conservative provocateur connected to Trump until he was fired in 2016. Roger Stone and Donald Trump were introduced by none other than Roy Cohn himself, according to CNN. So Sheen’s character is probably best understood as some sort of amalgam of both of these men, along with fictional elements peppered in in the name of good television.

There are deep wells of history and some big ideas behind the figures that are acting as inspiration for Roland Blum, and his ideals and eccentric personality will almost certainly clash with Diane Lockhart, Adrian Boseman, Liz Reddick, and the rest of the ragingly liberal Good Fight cast.