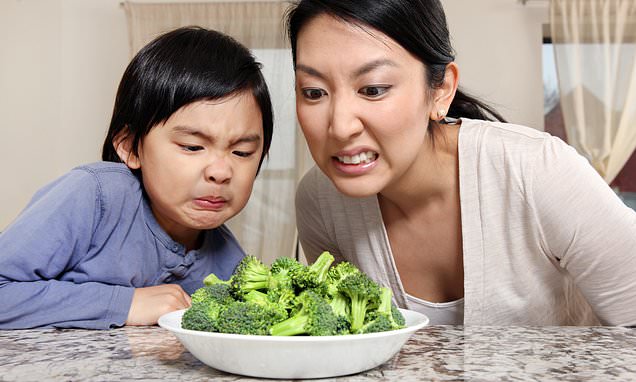 The ULTIMATE parenting hacks every mom and dad should know: From how to make kids eat vegetables to sneakily cutting down tech time, parents share their most helpful tips and tricks

Putting food coloring into food to make meals more fun, adding sprinkles to broccoli, and keeping the iPad only 35 per cent charged are just some of the more creative ‘parenting hacks’ uncovered in a recent study.

The average parent uses seven parenting hacks every day, according to the new study of 2,000 American parents.

The study, which was carried out by streaming service Vudu, found that 64 per cent of parents use parenting hacks in an attempt to get their children to eat healthily. 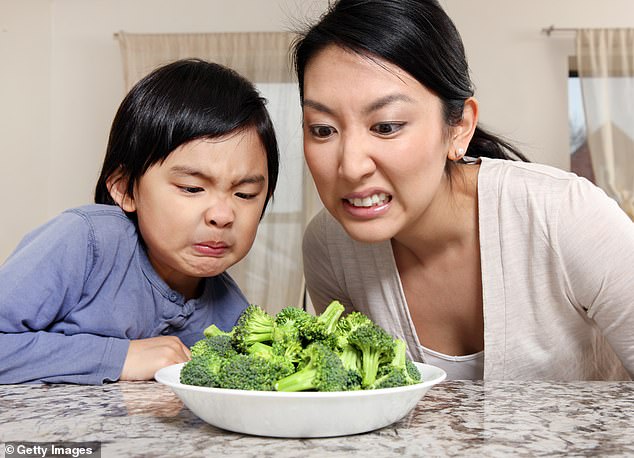 Life lessons: It has been revealed that parents use a staggering seven parenting hacks a day, including hiding marshmallows in vegetables to make them more appealing to their children 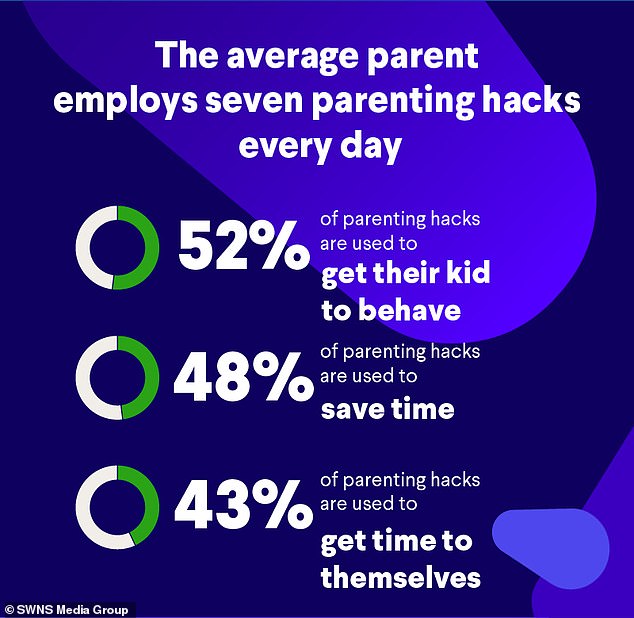 Top tips: 52 per cent of those surveyed said they use ‘parenting hacks’ to get their children to behave, while 48 per cent use them to save time, and 43 per cent employ the hacks to get some alone time

Such hacks include mixing cauliflower into their child’s mac and cheese, and putting a little chocolate or sprinkles on their broccoli.

Other popular areas to use parenting hacks are when they’re trying to get their kid to behave (52 per cent), trying to save time (48 per cent), and just to get a little time to themselves (43 per cent).

The new survey, conducted by streaming service Vudu, found that parents spend an average of five hours a week actively trying to get their child to do something.

This ranges from getting them to go to bed, eat their vegetables, do their chores, and everything else children typically don’t enjoy doing.

Bribery is a popular tactic to utilize in this area, with 82 per cent of parents admitting they persuade their child to do something by offering them money or candy as reward.

When it comes to what parents consider ‘life savers,’ wet wipes, TV and movies top the list, with 60 per cent and 58 per cent saying parenting would be more difficult without them, respectively.

In terms of time spent in front of the television, almost all parents surveyed (95 per cent) reported letting their children watch TV and movies in order to get some time to themselves every now and then.

Using TV and movies as a reward for good behavior is also a very popular parenting tactic, with 76 per cent of parents reporting they use it with their children.

3. Telling children that medicine is ‘candy’

4. Telling children they have to be sweet in order to get sweets

5. Keeping the iPad charged to just 35 per cent to avoid spending too much time on it

Rachel Derrico of Vudu said: ‘With the holidays coming up, a family-friendly movie is a great parenting hack to help get kids through gatherings – not to mention a fun way to make memorable, shared experiences.

‘Kids will remember watching movies at grandma’s house over the holidays with their family all around.

‘And the fact that we can offer so many great titles for free to all our customers, even better.’

And that doesn’t mean parents are placing their kids in front of the TV and leaving them alone.

The survey revealed that a lot of parents enjoy watching TV with their kids, even though their children’s viewing pattern tends to be a little repetitive.

84 per cent of parents say that they have certain shows and movies completely memorized because their children have watched the same thing over and over again.

However, 91 per cent of parents believe watching TV and movies with their kids is an effective way to bond with them.

Derrico said: ‘After all the holiday hustle and bustle, sitting down to share a little screen time with your kids is a great way to bond with them over their favorite movies and TV shows –or even a meaningful way to introduce them to some of your childhood favorites.

She added: ‘And free movies are a fun, easy, and budget savvy way to carve out some quality, family time during the season.’