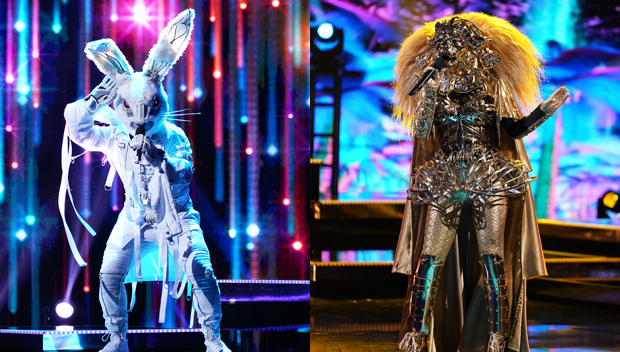 There’s only one episode left until ‘The Masked Singer’ finale! Two celebrities were unmasked on the Feb. 20 episode. Find out who the celebrities are now!

The Masked Singer semi-finals have arrived. The peacock is up first on the show, and he continues the magical clues in his new video — like levitating! “I’m a perfectionist when I perform,” the peacock says. After a less-than stellar performance last time, the peacock goes back to his roots with an epic and upbeat performance. He sings Calvin Harris and Ne-Yo’s hit “Let’s Go.” He has the panelist and audience up on their feet! His next big clue: “I have dedicated my life to show business.” Neil Patrick Harris and Weird Al’s names are thrown out there, but Jenny McCarthy guesses Donny Osmond. She may be right on the money!

Next up is the monster. “I’ve been vilified and persecuted for sounding like a ringtone,” he says, another hint that the monster is T-Pain. The monster talks about “one slip” that made him lose his place in the game. The Masked Singer is the “comeback he’s wanted for a decade.” He’s been “hiding behind faster tracks until now.” The monster performs a gorgeous rendition of Sam Smith’s “Stay With Me.” He later revealed that he’s a father, husband, son, and brother. Ken Jeong guesses Jamie Foxx, while Robin Thicke thinks the monster could be Darius Rucker. Guest panelist Kenan Thompson tosses out Cee Lo Green’s name!

The lion is the third performer of the night. She loves The Masked Singer because she’s “judged only as a singer.” Under this masked, she’s “not the child of my parents.” She also mentions an “empire” she was born into. Hey, another Empire reference! She hits the stage with an awesome rendition of a Stevie Wonder classic. Her final clue of the night is that she’s “an advocate, not a victim.” However, she has been bullied in the past. Kenan guesses Kelly Rowland, while Robin goes for Kelly’s Destiny’s Child bandmate Michelle Williams. Ken thinks it could be someone from En Vogue, and Jenny goes out on a limb and says Hailee Steinfeld.

The rabbit takes the stage next. He hints at his love for camping and drops a “chicken of the sea” reference. Nick Lachey, perhaps? He performs “My Girl” by The Temptations. Nicole Scherzinger wishes the rabbit had more “stage presence” with this performance. His final clue is that he’s “done some solo work in a costume before,” but it had nothing to do with singing. Jenny thinks the rabbit could be her husband, Donnie Wahlberg. Kenan throws Nick Lachey’s name into the mix for the first time. Nicole is still convinced the rabbit is Joey Fatone. Ken goes with another boy band hunk — Kevin Richardson.

The bee is the final performer of the night. She acknowledges that people think she’s Gladys Knight, but she hints that she may have been giving “mixed messages.” She bakes a peach cobbler in her intro video and mentions her good friend, Aretha Franklin. She performs a powerful rendition of Aretha’s “(You Make Me Feel Like) A Natural Woman.” Kenan is certain that the bee is Gladys, while Nicole thinks the bee is Patti LaBelle. Ken goes for someone different and guesses Anita Baker.