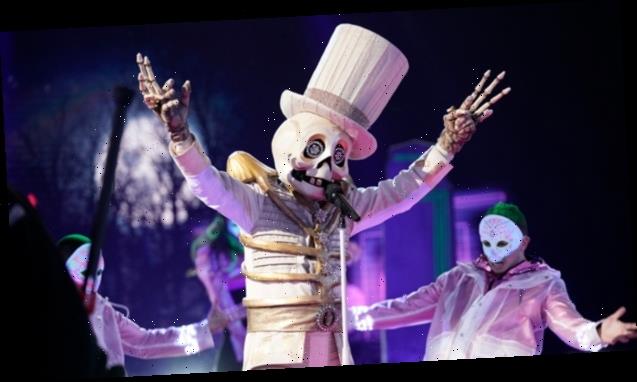 A new round of performances from masked singers led to one celebrity being unmasked at the end of the Oct. 16 episode of ‘The Masked Singer.’

Six masked singers return in hopes of making it to the next round of the competition on The Masked Singer. The Flamingo is up first. She says she went from “hoodrat to Hollywood triple threat” and was “discovered by a powerful wizard.” She performs a sensational rendition of “Footloose.” The guesses for the Flamingo include Ally Brooke and Adrienne Bailon. The Flamingo’s final clue is that she wanted to be a doctor and even went to medical training school.

The Leopard came from humble beginnings as well. He admits that he wasn’t wanted as a kid and was “passed from pack to pack.” He’s been determined to always live his life “in color.” The Leopard performs “Stitches” by Shawn Mendes. The guesses for the Leopard are Billy Porter, RuPaul, and Neil Patrick Harris.

The Black Widow reveals she had to grow up with a “squeaky clean image” but she’s always had an edgier side. She’s done pretending to be someone she’s not. She brings down the house with an epic performance of Carrie Underwood’s “Before He Cheats.” Robin Thicke believes the Black Widow is Raven-Symone, while Nicole Scherzinger guesses Christina Aguilera. Ken Jeong guesses Fresh Prince of Bel-Air star Tatyana Ali. Her final clue is that she never went to prom, but she pretended to go.

The Skeleton says she’s felt “overshadowed” since childhood. He’s tired of playing second fiddle. The Skeleton performs Jet’s “Are You Gonna Be My Girl.” Robin and Ken think the Skeleton is Martin Short, while Jenny McCarthy guesses Paul Shaffer. The Skeleton’s final clue is that he was once inducted Black Sports and Entertainment Hall of Fame.

The Thingamajig doesn’t give away too many clues, except some hints about magic and his reveal that singing was his first love. The guesses include Dwight Howard and Montel Jordan. His last hint is that he went to rehab.

The Butterfly is the final performance of the night. Her clue package hints at a London connection. She says at the height of her career “everyone knew my name.” When she tried to spread her wings, it didn’t go so well. She also reveals that she did well in school but was a “rebel” outside of school. She also admits she got electrocuted during rehearsals after a technical flub. The Butterfly slays Jon Bon Jovi’s “Livin’ On A Prayer.” The guesses include Fantasia, Mel B, Leona Lewis, and Twiggy.

The masked singer going home is the SKELETON! The final guesses from the panelists include Paul Shaffer, Martin Short, and Teller from Penn & Teller. The Skeleton is revealed as PAUL SHAFFER!