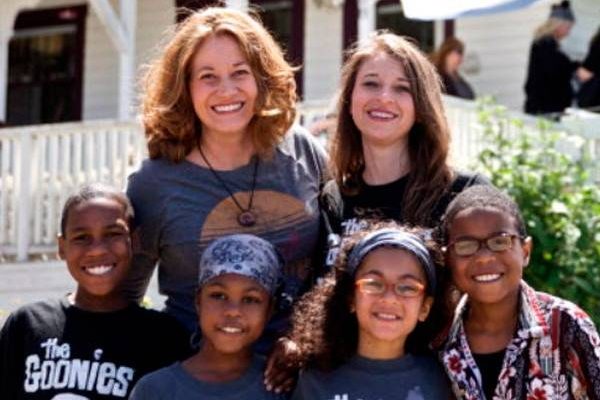 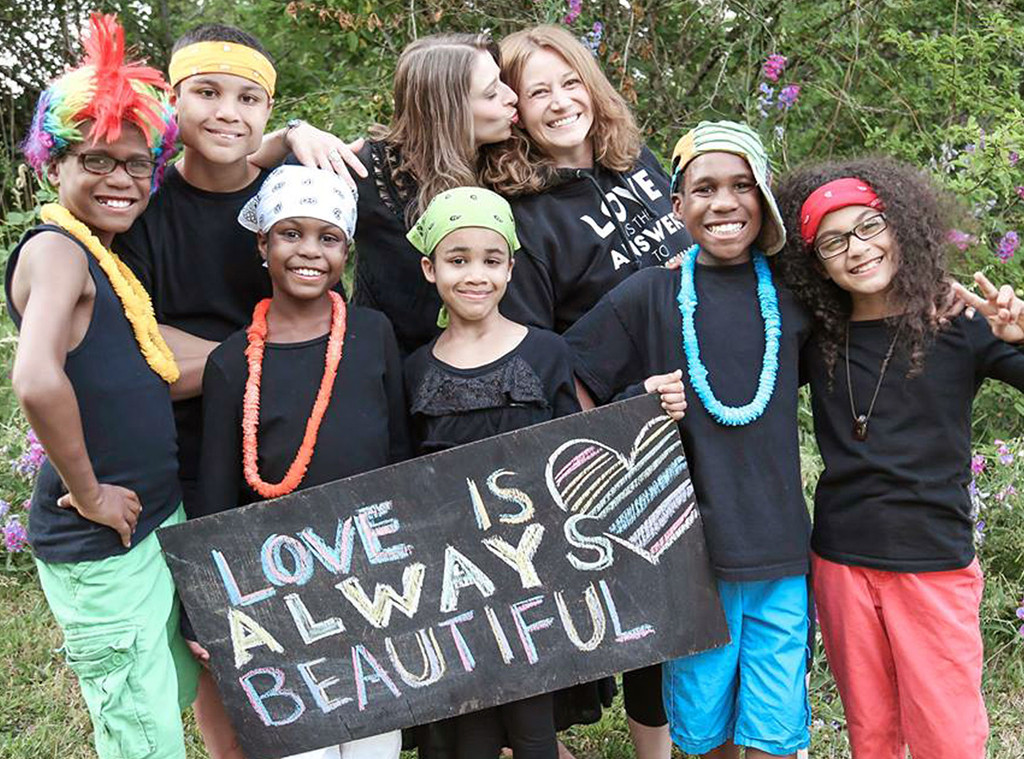 Jen and Sarah Hart seemed like they had it all, which is exactly what Jen wanted her Facebook followers to believe.

The young couple’s motherhood journey had been documented for friends to family and follow and fawn over ever since they adopted their first set of siblings in 2006.

On March 26, 2018, German tourists found the family’s 2003 GMX Yukon XL after it flipped and fell off of a cliff on the 101 Highway in Northern California, with Jen, Sarah, both 38, and three of their six adopted black children found dead at the scene. The shocking accident made national news.

But then the details started emerging…like the fact that Jen, who had been driving, had alcohol in her system, while Sarah and two of the children appeared to have taken Benadryl. No one seemed to have been wearing a seat belt at the time of the crash. And the speedometer was at 90 miles per hour…had Jen not tried to brake at all? Or did she purposefully drive the SUV off the cliff?

“I’m to the point where I no longer am calling this as an accident,” Mendocino County Sheriff Tom Allman said on HLN’s Crime & Justice with Ashleigh Banfield. “I’m calling it a crime.” 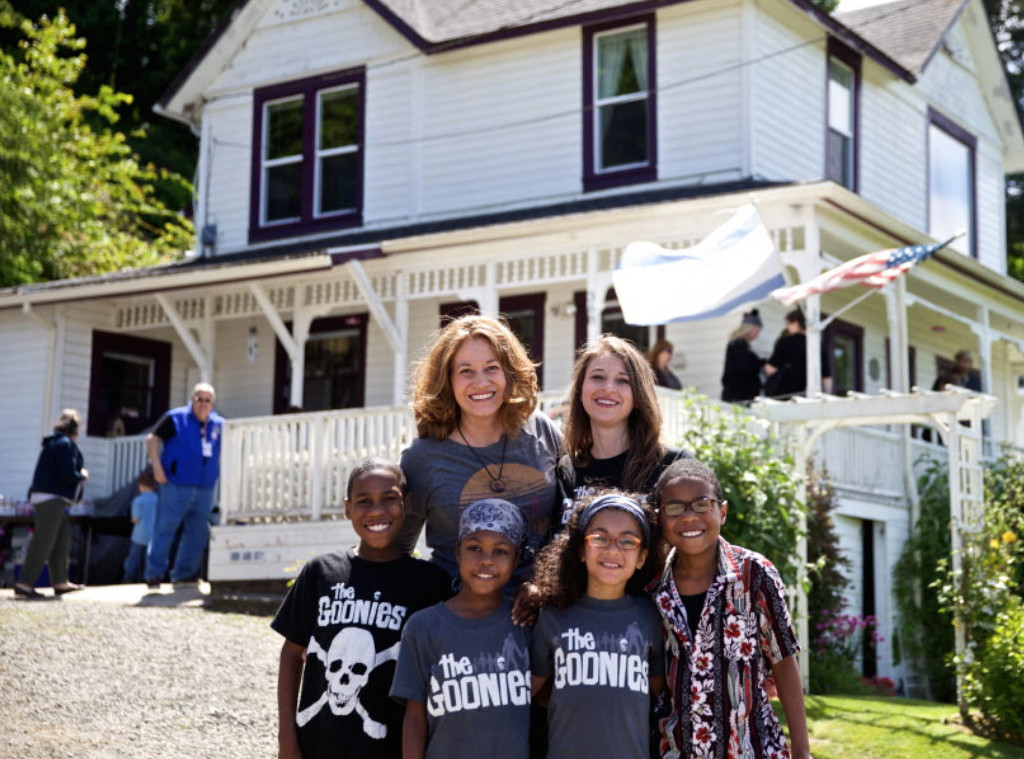 As more information got out, more and more questions about who Sarah and Jen arose, and in Broken Harts, a new investigative podcast from Glamour and HowStuffWorks, their relationship history, ongoing troubles with Child Protective Services and allegations of abuse are being meticulously unpacked, as the reporters talk to their friends, family, neighbors and the police to try and understand one of the year’s most disturbing stories once the filter was removed.

“Everyone was envious,” family friend Ian Sperling told Glamour of the couple. “They were the perfect people with the perfect kids.”

Another friend Zippy Lomax told the magazine, “There was nothing about the way Jen was presenting their life that seemed at all at odds with my understanding of who they were.”

But behind the endless stream of photos of their six children smiling presented with long, happy-memory-filled captions, was a long history of abuse allegations, with the couple being reported and investigated in three different states.

In 2006, Jen and Sarah, who had then been dating for about a year, became first-time mothers in a big way: Markis, 8, Hannah, 4, and Abigail, 2, a set of siblings, became their foster children.

In a detailed Facebook post, Jen recounted the hardships of their first night of motherhood, but said they remained committed to becoming mothers to the three Texas siblings. “If not us—WHO?” she wrote.

Two years later, they took in three more foster children, another trio of siblings: Devonte, 5, Jermiah, 4, and Ciera, 3, with the couple changing the spelling of latter children’s name to Jeremiah and Sierra. 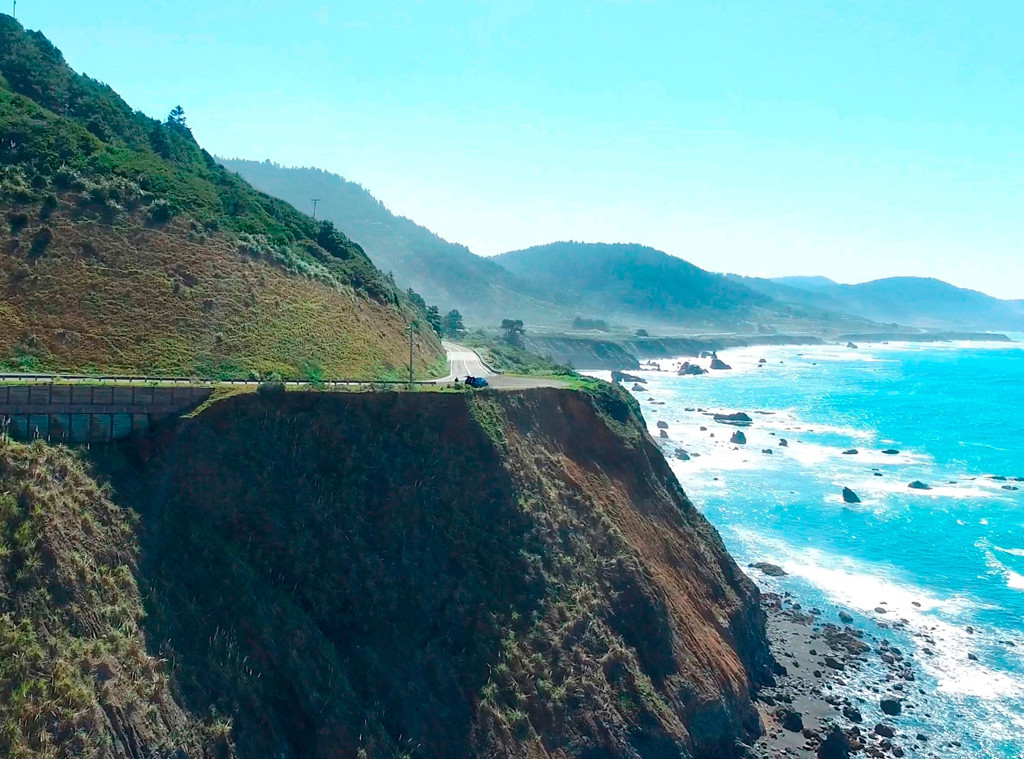 But the couple had actually fostered another child in 2004, when they were in their mid-twenties. A 15-year-old girl came to live with them and was expecting to be a big sister to the first set of siblings they would adopt…until they dropped her off at a therapist’s office and she never saw them again.

While there was some friction between the girl and the couple, mostly Jen, she told The Seattle Times, “I remember being devastated.”

While Sarah worked, Jen stayed home and raised the children, later home-schooling them when they were all abruptly pulled out of school following investigations by CPS. The couple was big into “transformational festivals,” which partially factored into their move from Minnesota to Portland in 2013. They would bring their kids to the days-long events, which included yoga, music and dancing.

Jen would often post photos from these festivals, with all of the children wearing huge smiles, and would post inspiring updates from their daily life. As a friend told Glamour, “She was a master poster.”

Commenters would leave glowing remarks about their parenting. Some even asked if they would ever think of doing a reality show.

“She made parenting look unbelievably easy and awesome and there was no red flags,” Sperling said in episode 3 of Broken Harts. “Zero.”

But the first sign of something not being right in the Hart household actually happened ten years prior to the horrifying crash, with police interviewing the couple in September 2008 after Hannah showed up at school with bruises on her arm, telling a teacher she had been whipped with a belt, according to a police report.

No criminal charges were filed.

Still, how was the couple ultimately allowed to foster three more children, with the agency even using a photo of Jen and Sarah with their first three adopted kids?

“Unless there’s a criminal charge, what can you do?” a now-retired judge Patrick Shelton, who presided over the court that granted the couple custody of the second set of siblings, told The Appeal. “Believe it or not, kids get bruises that do not get beat.” 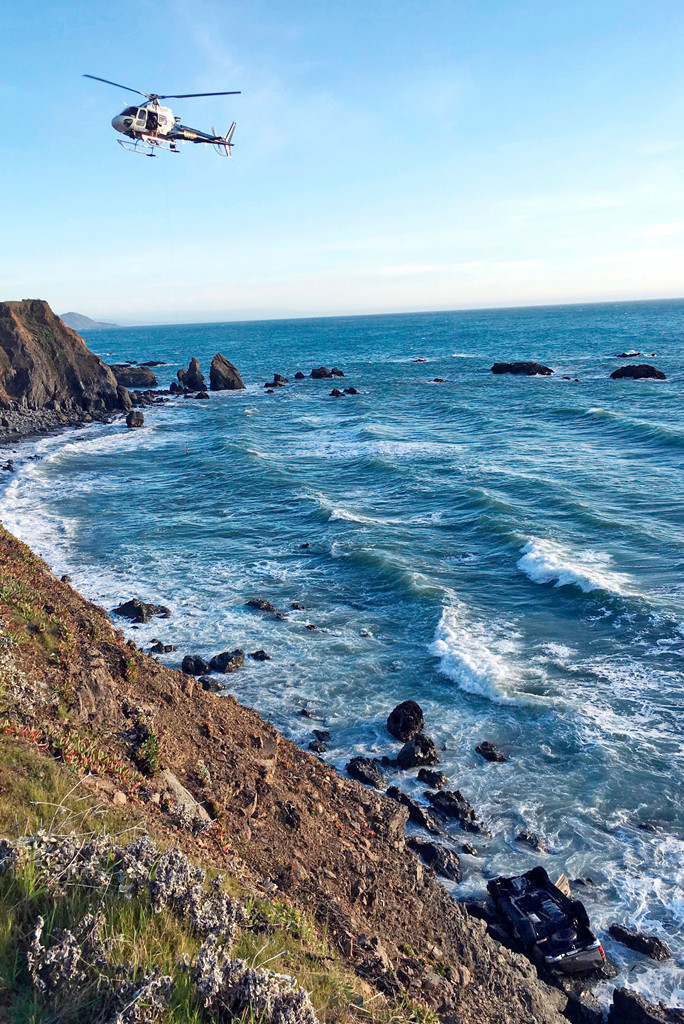 Then in 2010, Sarah is charged with malicious punishment of a child and misdemeanor domestic assault, according to Minnesota court records, after bruises are discovered on Abigail at school.

But in the police report, Abigail had said it was Jen that had injured her because they thought she had stolen a penny that fell out of her pocket. When the other children were questioned, they revealed they were often spanked or sent to bed without food.

When Sarah told police she had been the one to spank Abigail, Jen backed up her account, with investigators believing them.

“They were a little guarded. They didn’t want anyone in their business,” Larry Dailey, the former police who interviewed the Harts, told Glamour.

In 2011, after Sarah plead guilty, she was sentenced to community service and one year probation. Around this time, the couple pulled all six of the kids out of school and they never went back, with Jen home-schooling them.

Following their move to Oregon in 2013, a few people called into CPS to report some troubling things they had noticed.

According to one CPS report, an anonymous person, who called the children “trained robots,” brought attention to the alleged façade of Jen’s Facebook posts.

“Jen does this thing for her Facebook page, where the kids pose and are made to look like one big happy family, but after the photo event, they go back to looking lifeless.” 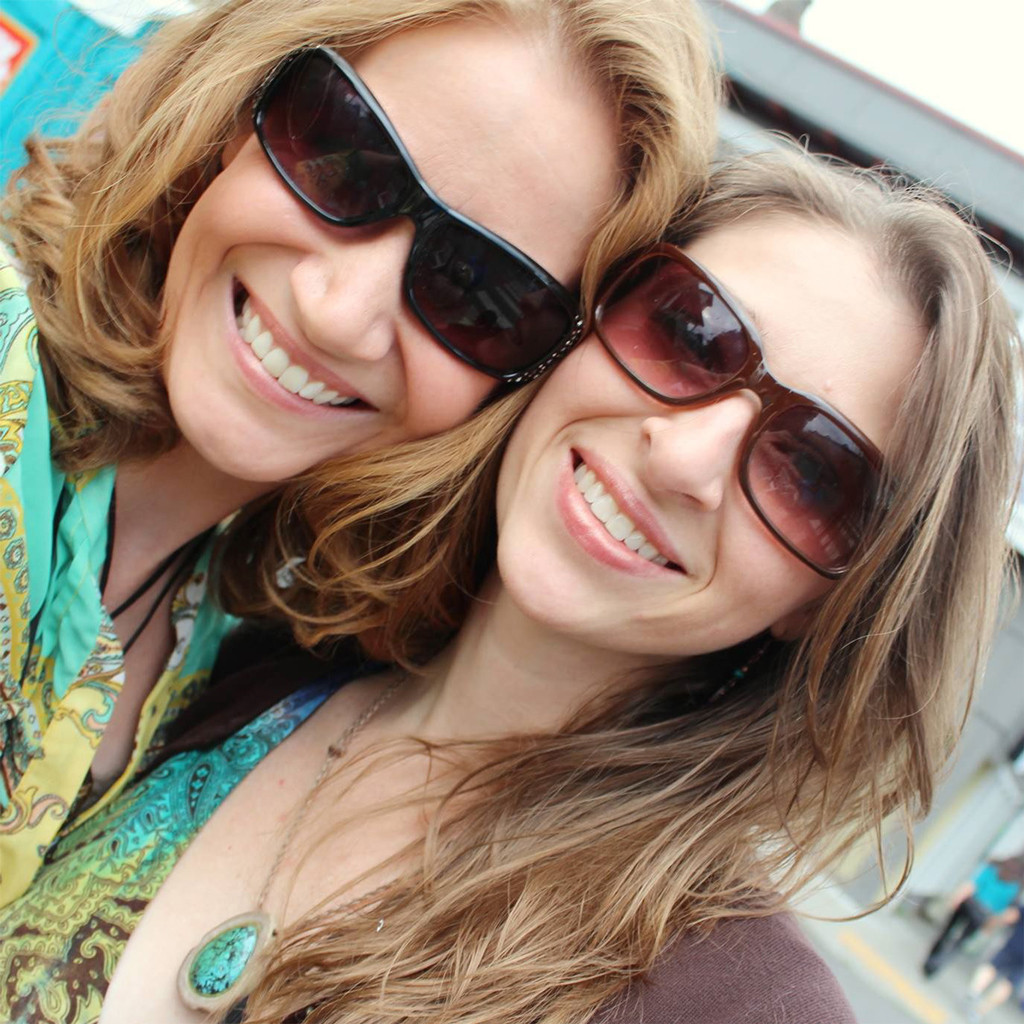 The person also said they seemed “scared to death of Jen.”

A former friend of theirs also called Child Protective Services after the Hart family had stayed with them, claiming Jen handled the children “like a regimented boot camp,” adding that she would often get angry if they laughed too loudly.

“True kindness, love, and respect for the kids was largely absent.”

The calls lead to child welfare visiting the family in August 2013.

According to the report filed by the case worker, Jen was “adamant that many of the family’s issues stemmed from others not understanding [their] alternative lifestyle.”

While the state ultimately closed the case, the case worker had warned, “The problem is these women look normal.”

If any of the kids received positive attention from Jen, it was Devonte, friends said. When he was 12, a photo of him went viral, with it being called “the hug shared around the world.” It was taken after a grand jury decided not to indict the white officer who killed Michael Brown in Ferguson, Missouri, in 2014, with a crying Devonte, who had been wearing a sign that said “free hugs,” hugging a white police officer at a Black Lives Matter protest. 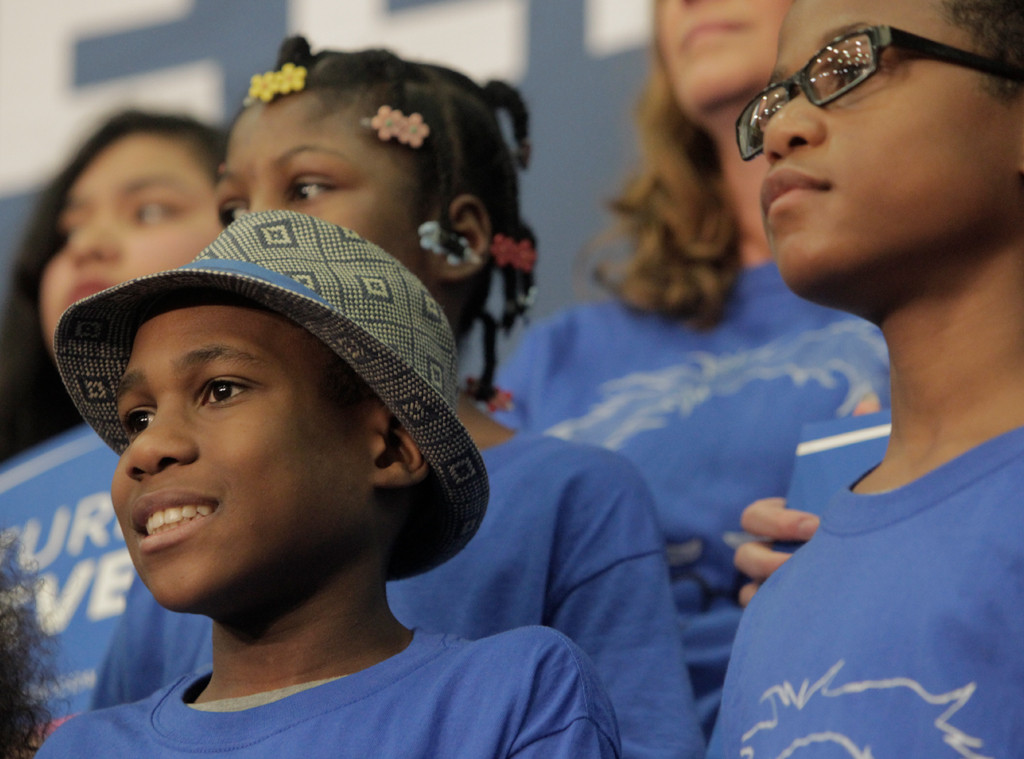 Questions later arose if the moment was staged, and according to a Clark County sheriff’s report, Sarah had told a co-worker that the moment had changed her wife. Jen claimed to friends he had to turn down many TV offers, and posted on Facebook, asking people not to share photos of the Hart children.

“Understand that these kids come from incredibly fragile and challenging beginnings in life and we have done our very best to protect the past from seeping back into their lives.”

By mid-2017, after a social media break, Jen revealed the family had moved to Washington, their third state since adopting their children. And while they tried to remain “private,” their neighbors eventually reported an incident to police.

“One of the girls came to the door at 1:30 in the morning and said that she needed help and the parents were not treating her properly, and (she) wanted us to protect her,” their neighbor Bruce DeKalb said.

According to his wife, Dana DeKalb, the girl said to them, “They’re racists, and they abuse us!”

It was Hannah, who was missing her two front teeth, and claimed she had been whipped with a belt and not been fed as punishment, according to an incident report.

Jen eventually was able to convince Bruce and Dana everything was OK. “She sold it well,” Dana said. “She was good.” (One line? When explaining why they home-schooled the kids, Jen said it was because they were bullied. “We’re two lesbian moms with six black kids,” she said, according to Dana.)

But then a nervous Devonte showed up asking for food. And kept showing up, even coming with a list of food. Eventually, he told Dana that his mothers withheld food from him and his siblings.

“It started out as one time a day and escalated up to three times a day, until a week went by and we decided that we needed to get professional help.” 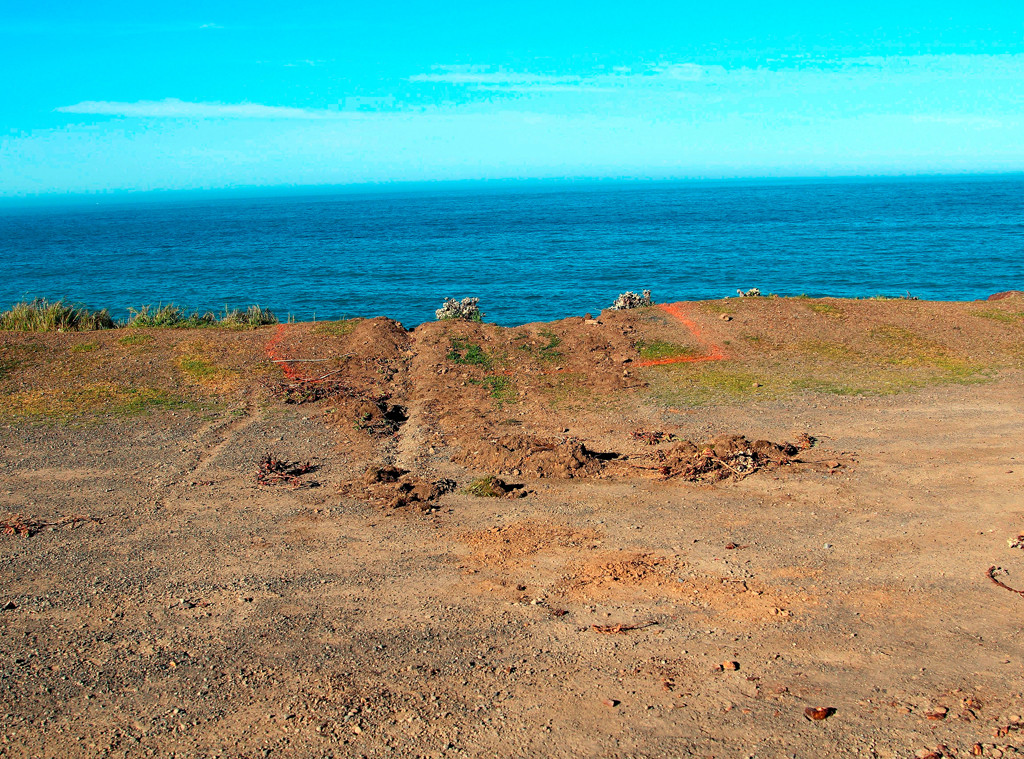 Finally feeling like they had enough information, the DeKalbs called CPS on March 23, just a few days before the crash. Jen didn’t answer the door. By the next day, the Hart tribe was gone.

“I’m like, ‘S–t’s getting real,'” Dana told Glamour of the family’s hasty departure. “We knew they were running, but it never occurred to me that they needed to be intercepted.”

What really happened next that lead up to the horrifying discovery of their flipped car on March 26 hundreds of miles away from their home, no one knows…not even the police.

“I can fairly say that several of the questions that have been asked today [will] never be answered,” Mendocino County, California, Sheriff Tom Allman told reporters in March. “It was un-witnessed. We don’t know what happened.”

After their car was discovered, three of the six Hart children were unaccounted for, while the bodies of Markis, 19, and Abigail and Jeremiah, both 14, were found.

In April, body of Sierra, 12, was pulled from the water, while Devonte and Hannah remain missing.

A toxicology report revealed Jen’s blood alcohol level was 0.102, while Sarah and two of the kids had an ingredient commonly found in Benadryl in their system. When police searched their home, investigators described it as “sterile,” with empty picture frames hung on the wall. The kids’ room had two small beds, a mattress on the floor and not much else.

“I did not get the indication that children lived in the house,” one office wrote in the report.

While the women had been together for over 18 years after meeting at Northern State University, and Jen often posting loving tributes to Sarah on social media, records released by the Clark County Sheriff’s Office November reveal marital issues.

In a 2010 e-mail, Jen described their home life as “very rollercoasterish.”

She explained to a friend, “For quite some time I have felt very under appreciated, and taken for granted in our relationship…and at times unloved. While I know deep in my heart how much she loves me….she is just horrible about showing it.”