Yes, the Emmy Awards aired Monday as scheduled, and yes, it was very strange. Here are some of the things to know from the three-hour telecast, which took place completely virtually, aside from host Jimmy Kimmel and a few celebrities anchoring the show from the Staples Center in Los Angeles. 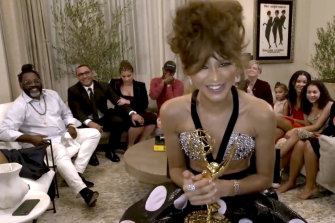 Zendaya accepts the award for lead actress in a drama series for Euphoria.Credit:The Television Academy and ABC Entertainment via AP

In an unprecedented sweep, Schitt's Creek – a basically unknown Canadian sitcom until it landed on Netflix and blew up into the show that everyone tells you that you have to watch – won seven awards for its sixth and final season, and made Emmys history as the most-awarded comedy in a year. It earned prizes for best comedy, writing and directing, as well as all four acting awards for stars Catherine O'Hara, Eugene Levy, Daniel Levy and Annie Murphy, all of whom wore masks and were gathered at an outdoor setting in Canada.

"Our show at its core is about the transformational effects of love and acceptance, and that is something we need more now than we've needed ever before," said co-creator Daniel Levy, who appeared to be in shock.

His father, Eugene Levy, praised his son for turning the show about a wealthy family forced to relocate to a middle-of-nowhere town "into a celebration of inclusivity, castigation of homophobia and a declaration of the power of love."

Watchmen, HBO's bold series about racism and trauma, won four awards on Sunday night as its cast and crew continually reminded the Emmys audience of the series' powerful message.

Regina King slipped out of her gown from earlier in the evening and accepted her award for best lead actress while wearing a T-shirt bearing the face of Breonna Taylor. And series creator Damon Lindelof, who picked up awards for writing as well as best limited series, accepted his statues while standing in front of a framed American flag with a group of fellow crew members.

But it was Yahya Abdul-Mateen II, during his speech for outstanding supporting actor in a limited series, who drove the show's powerful and pioneering message home.

"Watchmen," said Abdul-Mateen, who played the super powerful Doctor Manhattan, "was also the story of a god who came down to Earth to reciprocate to a Black woman all the love she deserves." 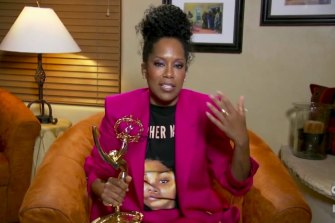 Regina King accepts the award for lead actress in a limited series or movie for Watchmen.Credit:The Television Academy and ABC Entertainment via AP

Ramy Youssef, who was nominated in the best actor and directing categories for his Hulu comedy Ramy, lost both races and tweeted a video of someone outside the window wearing a hazmat suit, holding an Emmy statuette and waving goodbye. He captioned the tweet, "when you lose the emmy." So that's how they did it.

In addition to King, who accepted her award for Watchmen – a series that deals heavily with race and police misconduct – while wearing a T-shirt with Taylor's face and the words "say her name," Uzo Aduba, who won outstanding supporting actress for playing Shirley Chisholm in the limited series Mrs. America, also wore a T-shirt with Taylor's name on it. 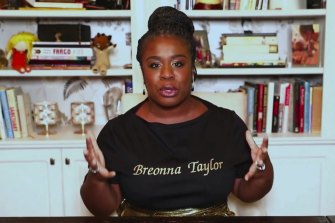 Uzo Aduba accepts the award for outstanding actress in a limited series or movie for Mrs. America.Credit:The Television Academy and ABC Entertainment via AP

Three actors of colour looked back on their start (and stops) in Hollywood during the telecast. In separate sit-down confessionals, Issa Rae (Insecure), Lena Waithe (The Chi) and America Ferrera (Superstore) recalled a few of the "aha!" moments in their careers, including the time Ferrara, who is Latina, was told by a casting director to read a line more like a Latina.

For Rae, it was a non-Black TV executive who tried to school her on what appealed to Black audiences. "For me," said Rae, "that moment was the motivation I needed to keep doing what I was doing. To kind of bet on myself. And that fueled me. Like, 'Oh, okay. I'll show you.' And, you know, one of us got fired after that."

Waithe, who called television her third parent, said that she reserved "the right" to tell stories in her own way. 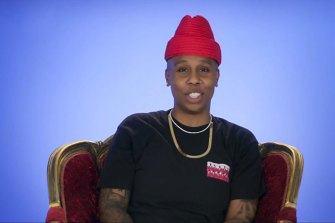 8. A strong showing for Succession

While accepting the award for outstanding drama, Armstrong offered "un-thank yous" to President Trump, British Prime Minister Boris Johnson, "nationalist and quasi-nationalist governments in the world" and, in a clear nod to the series' central Roy family, "the media moguls who do so much for keeping them in power." 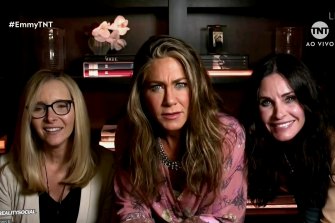 There was a surprise Friends reunion at the Emmys.Credit:Instagram

13. A surprisingly moving "In Memoriam"

The "In Memoriam" segment usually exists for two reasons: for people to get angry over who is left off the list and for viewers to get up and take a break from the TV for a few minutes. But this year, those who used this time to get a snack missed an unusually moving segment. Soundtracked by H.E.R. singing Prince's Nothing Compares 2 U, the tribute started with Supreme Court Justice Ruth Bader Ginsburg, who died Friday; included stars from Regis Philbin to Naya Rivera to Kirk Douglas to Diahann Carroll; and ended with Chadwick Boseman delivering his commencement speech at Howard University in 2018: "Purpose crosses disciplines. Purpose is an essential element of you. It is the reason you are on the planet at this particular time in history. The struggles along the way are only meant to shape you for your purpose."

Of course, there was an alpaca with a tuxedo. Randall Park seemed equally confused.