On closing Michelle de Kretser’s On Shirley Hazzard, I went straight to The Transit of Venus and read Hazzard’s finest work for perhaps the third or fourth time. As de Kretser writes about her own second reading of the novel: ‘‘The sensation came, like a blow to the breastbone … the shock of the great.’’ Halfway through I felt another blow, this one the shock of betrayals by two lovers, delivered in a cold sentence with such impact that I doubled over and wept – at human pain and cruelty, and at the author’s brilliance.

De Kretser begins her distilled appreciation – 13,000 words, 98 pages – with the memory of her tears at the news of Hazzard’s death in December 2016. She was embarrassed by her grief, having no personal connection with the Australian-born writer, who lived most of her 85 years in New York and Italy. But she cried as a reader and a writer, ‘‘by right of admiration’’. 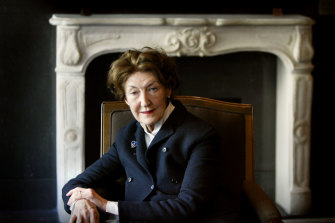 Shirley Hazzard when she received the Miles Franklin award for The Great Fire.Credit:Craig Sillitoe

I enjoyed Hazzard’s generous, erudite friendship for 20 years, from the time I interviewed her in New York, through shared travel to Rome, Naples and Capri, until my last visit to her bedside. But my admiration is no more intimate than de Kretser’s perceptive reading.

There are many pleasures in this matching of novelists a generation apart, closer in sensibility: global citizens with “an ‘antipodean’ way of seeing”; masters of the precise, lethal sentence who move their characters coolly through the mayhem of love and war, against constraints of nationality, class and gender. De Kretser says Hazzard is ‘‘very serious and very funny’’, using irony and satire, ‘‘the weapons of the outsider’’, to puncture pretension. The same is true of de Kretser, who won Miles Franklin Awards for her most recent novels, Questions of Travel and The Life to Come. 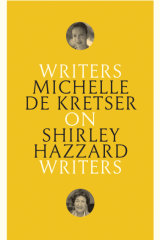 Less biographical than some in the valuable Black Inc. Writers on Writers series, de Kretser’s piquant essay does not depend on life story or plots. Instead she analyses Hazzard’s prose style. Brief chapters about a single book or aspect such as ‘‘Straya’’, ‘‘Lessons in adjectives’’, ‘‘Excellent dogs’’ are canapes that sharpen the appetite for Hazzard’s work.

De Kretser must have had fun, and difficulty, selecting quotations to illustrate her admiration. They succeed at ‘‘giving readers unmediated access to [Hazzard’s] prose’’, as in the list of sentences headed ‘‘Lessons in characterisation’’. Here’s one: ‘‘Too cautious to detest, Mrs Baillie did, with some regularity, not quite like.’’

De Kretser refutes critics who have dismissed Hazzard as an anti-Australian or romance writer, and Patrick White’s letter to his friend about her ‘‘chief lack’’ in The Transit of Venus. She also quotes admirers such as Charlotte Wood. But she is not an undiscriminating fangirl.
(Don’t think her admirers are all women. While I was reading Transit before my interview with Hazzard in the 1990s, I approached a man standing with a copy on a Manhattan subway platform. He said it was his most loved novel.)

Hazzard left Sydney as a teenager, married an American writer, Francis Steegmuller, made her name in The New Yorker, won US literary awards. She visited Australia for the last time to receive the 2004 Miles Franklin Award for her final novel, The Great Fire. None of her six books of fiction is set here, though Australian-born characters are central to the later novels.

She turned her expat eye directly on the country in her 1984 Boyer lectures, Coming of Age in Australia, whose tone is ‘‘lucidly trenchant’’, and ‘‘doesn’t flatter’’, writes de Kretser. There was concern that she was critiquing the country of her childhood rather than the present. Yet her vision of a nation that could be ‘‘cosmopolitan, kind, ‘living without an enemy’ … open to the past, including ‘the prehistoric existence of Aboriginal peoples on this continent’ …’’ remains utopian.
De Kretser found none of the warned-of ‘‘condescension, ignorance, snobbery’’ in the lectures. Indeed, while Hazzard was ambivalent towards Australia, she was always warmly interested in Australians. 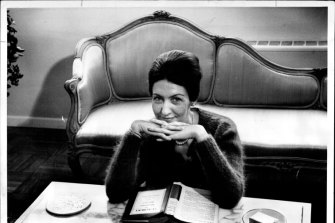 Shirley Hazzard photographed in New York in August 1963, shortly before her first book was published.Credit:

Hazzard’s politics are unequivocally on show, says de Kretser, as a ‘‘refusal to be cowed by power’’ in her two non-fiction books on the corruption of the United Nations, where she worked as a young woman. All her writing reflects a broad ‘‘solidarity for the vulnerable’’ and an enduring hatred of war.

Her first short-story collection, People in Glass Houses, also reflected badly on the UN. But de Kretser turns quickly to the early stories and novels set in Italy, which lit her creative flame: ‘‘The Bay of Noon was the first Hazzard novel I read, and I read it as if bound by a spell.’’ The book’s magic is in ‘‘its rapturous evocation of Naples’’, but ‘‘oxygenated’’ by ‘‘the deep subject of Hazzard’s work’’, the history that always underlies the love stories.

‘‘Hazzard had the courage to take love seriously in her fiction: to write about it intelligently, respectfully and without flinching,’’ de Kretser states. She makes a strong case and holds up as a badge of shame the male reviewer’s description of The Transit of Venus as ‘‘the best-dressed women’s magazine fiction of its year’’. That year, 1980, in the US the novel won the National Book Critics Circle Award for Fiction.

However, like de Kretser, I thought ‘‘Why the fuss?’’ when I first tried to read the novel soon after its publication. In the wake of books such as Helen Garner’s Monkey Grip it seemed to belong to an earlier, more decorous era. Like de Kretser, I experienced the complex greatness of this war-scarred novel on my second attempt. 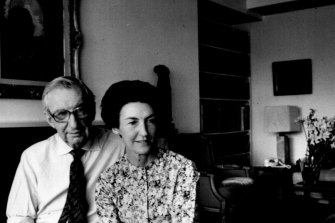 Shirley Hazzard with her husband, biographer and translator Francis Steegmuller.Credit:

Now, with foreknowledge, I gulp down the dispassionate narration and sinuous sentences as refreshment from a diet of overheated empathy. De Kretser is right: ‘‘No wonder The Transit of Venus refused my attempt to read it dreamily, like a child. Its call to reckoning is a matter for adults.’’

I especially enjoyed de Kretser’s unpicking of Hazzard’s technical skills, from vocabulary and syntax to naming characters, often invisible to general readers except in their effects.

Hazzard ‘‘often ends a sentence with a stressed monosyllable’’, as in ‘‘The decline of a sea-girt house offers no phase of seedy charm’’. De Kretser discussed her own liking for this decisive metre at a writers’ festival last year, and I wonder now if it’s a device she absorbed from Hazzard. Certainly, as she says of Hazzard, they both show the influence of poetry in the musical rhythms of their prose.
One of the most moving sentences in The Transit of Venus, in retrospect, comes in chapter two and tells us that the character Edward Tice will take his own life many years – and many chapters – later. De Kretser declares it ‘‘possibly the most brilliantly handled instance of foreshadowing in literature’’.

Her own most touching observation is about Hazzard’s frequent use of ‘‘echo-patterning’’ – repetitions of words or images lightly dropped through a text but powerful if you catch them. She credits her partner, poet Chris Andrews, with noticing an echo she had missed in The Transit of Venus: a young nurse goes to warm a soldier’s feet and finds they are missing; much later she touches the outline of her dying husband’s feet and covers them with a blanket. There are great rewards in the quietest gestures of literature and love.

I’ve said little here about Hazzard’s characters. De Kretser does not attempt full portraits but draws out the qualities that make them real and distinctively Hazzardous. She says of Transit’s protagonist: ‘‘Caro is tremendous. And scary. She has the idealism and intransigence of a heroine from myth. If she didn’t make mistakes, she would be insufferable …‘Very judgey,’ would be the verdict today.’’

That contrasts with de Kretser’s only disappointment. The Great Fire was published after a 23-year gap between novels, during which Hazzard wrote non-fiction and cared for her husband. She struggled to write the story based on her own youthful experiences in Hong Kong.
De Kretser notes the strain in the bland intimacy of the novel’s siblings, Helen and Benedict, and of Helen’s love affair with a much older man. Her explanation is insightful: Hazzard tried to turn her own thwarted love for an older man into an enduring love story, and let her wish overcome her judgment.

In 2021 there will be a biography of Shirley Hazzard by the Australian scholar Brigitta Olubas, who has written extensively on her work. Even then, de Kretser’s essay will stand as a pure response and an enticing introduction. I echo her words: ‘‘It’s my strong hope that everyone reading this will go on to read Hazzard for themselves.’’

Susan Wyndham is a Sydney journalist who lived in New York from 1988-96.