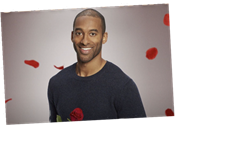 Five months after ABC announced The Bachelor had cast its first Black male lead, Matt James, we’re finally getting a premiere date for his long-awaited season. James will officially appear on our TV screens on January 4, 2021. 43 lucky ladies will be competing for James’s heart.

James, 28, is a real estate broker and former professional football player who hails from North Carolina. After graduating from Wake Forest University, he had a brief stint in the NFL playing for both the Carolina Panthers and the New Orleans Saints. He’s also the co-founder of ABC Food Tours, a food and fitness mentorship program for that serves New York City public school students.

James casting as The Bachelor comes to us after years of anticipation for a more diverse range of contestants. Rachel Lindsay, who made history as the first Black woman to star in The Bachelorette, admitted to feeling disappointed that the show did not continue to amplify people of color after her season ended. “The sad reality is that people of color become placeholders as the token person of color to add some flavor to the second half of the season,” she wrote candidly in a blog post.

James later applauded Lindsay for speaking truthfully about The Bachelor’s diversity problem and for ultimately sparking change. “When Rachel speaks, we listen,” Matt said on Good Morning America back in June. “She has a very important voice in all of this being the first Black woman, person of color, to have a lead. So, I think that we’re all following suit in that conversation and this is hopefully the first of many Black men to be in this position that I’m in now.”

Production for the show is currently underway and is said to wrap around Thanksgiving.