Since The Bachelor isn’t shown live every week — that would be wild and not nearly as dramatic — most couples have to don disguises if they want to see each other before the final episode airs. Thanks to a friend of this season’s winner (as reported by People), Cassie’s disguise when visiting Colton before The Bachelor finale has now been revealed. Not only did it effectively conceal her true identity, but her appearance might also remind you of a certain Pixar character: Edna Mode from The Incredibles, to be exact.

On March 13, Cassie’s brother Landon’s girlfriend Saige Neyda Davis posted a split-shot picture in her post-taping, pre-finale get-up to her Instagram Story. In one of the photos, Cassie is wearing a short, black wig cut into a bob and is hiding her eyes behind a dark pair of sunglasses. In the other photo is Edna Mode — and the resemblance is pretty uncanny.

"So happy @cassierandolph doesn’t have to transform herself into EDNA MODE before sneaking around w/ @coltonunderwood anymore," Davis captioned the side-by-side pics. Later, Cassie posted the pics to her own Instagram Story, writing, "OH. MY. GOSH. AHAH."

Would you have known that was Cassie if you had seen her dressed up like that on the street? Probably not, right? Solid work. 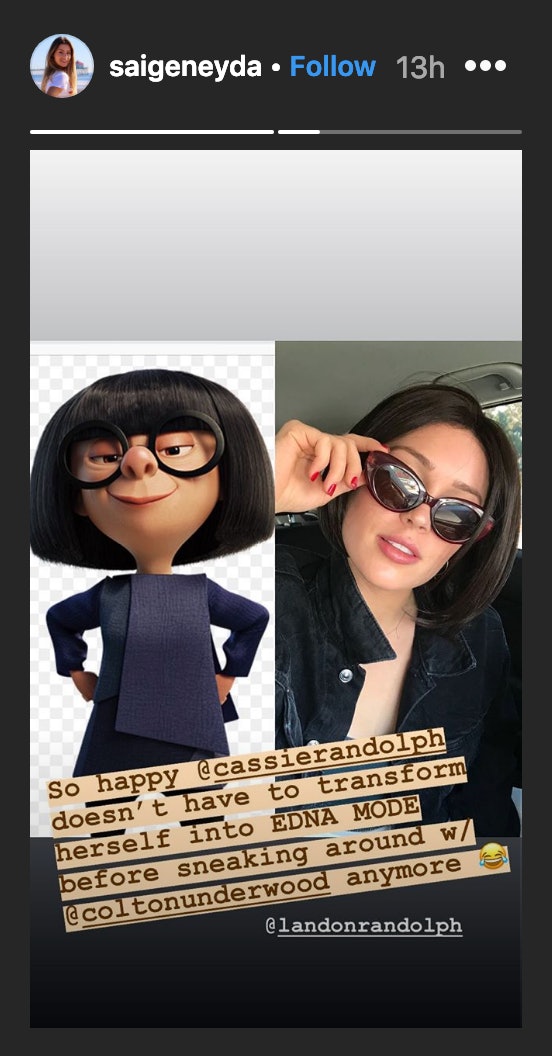 Having to sneak around like that has got to be tough. What if one day you just like, absentmindedly forgot your wig and ended up blowing the lid off the whole thing? So much pressure.

Colton also reposted the photo on his own IG Story and wrote, "Dead. I still think you look so good Cass." 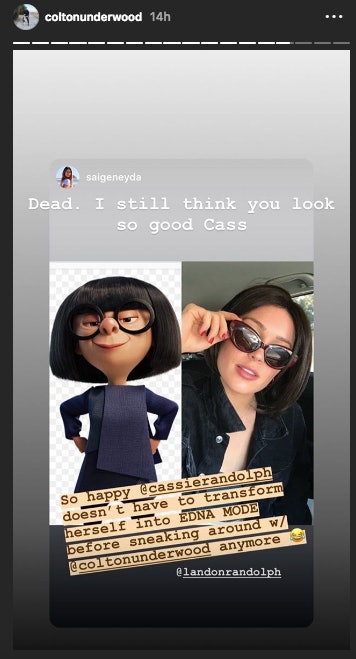 The couple expressed their relief in regards to the final reveal during a recent interview with People. "We’re so excited to be out in public and not have to hide anymore," Colton told the outlet. "I’m so in love, and I’m ready for everyone to know it." Cassie seemed equally thrilled, adding, "We can finally be outwardly happy, and not have to keep this big secret."

Colton’s season of The Bachelor officially came to a close on Tuesday, March 12. Shortly thereafter, he and Cassie both posted celebratory photos, and the one Colton chose was … let’s say, suggestive. The pic showed him, shirtless and in his undies, with Cassie embracing him from bed. The caption he added was really sweet, though.

Even though Colton and Cassie didn’t end up getting engaged, they’re clearly happy about working towards getting to that point together. In the photo Cassie posted after the finale, part of her caption read, "I can’t even begin to describe how lucky I feel to have you by my side. I am so excited to see what is next for us in this new phase of our ‘journey.’"

It’s unclear whether or not Cassie has already gotten rid of her Edna disguise, but she sure did pick a good one. Maybe she’ll at least hang on to the wig for the sake of nostalgia — just like Colton did with her butterfly. Everyone together now: "Aww!"