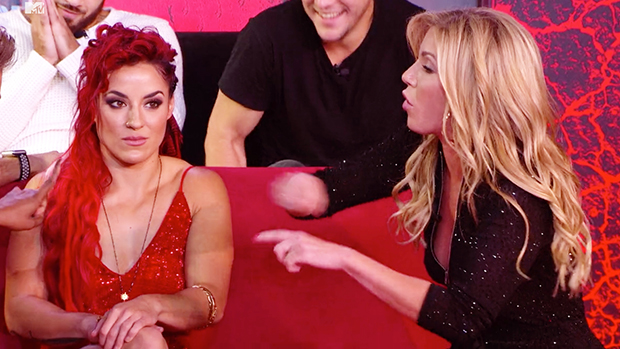 Even though ‘The Challenge’ partners, Marie and Cara Maria, didn’t end the season on great terms, they still have each other’s backs — and Marie proved it by standing up for her partner at the reunion in this EXCLUSIVE preview!

All the drama from this season of The Challenge: Final Reckoning will be hashed out during the two part reunion special, beginning Nov. 27, and HollywoodLife has an EXCLUSIVE sneak peek at one vicious fight that goes down! This battle pits Cara Maria Sorbello against Angela Babicz and Faith Stowers. The Ex On The Beach alum aren’t happy with Cara after hearing she called them “thirsty thots” in a group chat, and when the topic comes up during the reunion…Faith goes OFF! Cara doesn’t get riled up, but her partner, Marie Roda, sure does, and she and Faith get in each other’s faces and start screaming at one another.

Eventually, Cara is given a chance to explain herself. She admits she did say the girls “looked like thirsty thots” in an episode she got to watch earlier than everyone else, but insists she was just trying to give a warning about how things were being portrayed after editing. This sets Angela off, and while Cara stays pretty calms once again, Marie comes to her defense and a pretty wild war of words breaks out. We’ll have to see if this gets resolved when the reunion airs at 9:00 p.m. on MTV!

Cara and Marie made it to the final of The Challenge: Final Reckoning, but came in dead last against the three other teams. Cara made no secret of the fact that she was placing the blame on Marie for their loss, and even though they formed an incredible bond this season, they ended the final pretty pissed at one another.

Clearly, there’s still some sort of relationship that was salvaged, though, because Marie definitely seems to be Team Cara…at least in this clip. Check it out above!