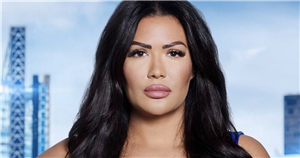 Move over Kim Kardashian, one of Lord Alan Sugar’s The Apprentice candidates is planning on giving the star a run for her money, describing herself as “the Kim Kardashian of the business world.”

Comparing herself to the SKIMS mogul in business brains and glamour, mum-of-two Rochelle thinks she's the UK’s answer to the billionaire and is hoping to land Lord Sugar’s £250,000 investment in the boardroom.

The Bedfordshire hair salon and academy owner already has 23,000 followers on Instagram where she describes herself as a “hair guru” and shares updates of her glam life outside of work, jet-setting to exotic destinations including Dubai, the Maldives and Australia. The business-owner also shares her love of designer fashion, her page full of bikini pics, and outfit shots featuring Fendi bandanas and Christian Louboutin shoes.

Rochelle says: “I’m always being compared to the Kim Kardashian of the business world because I’m doing business with a hint of glam.”

She describes herself as “tenacious, fierce and determined” and believes together with Lord Sugar they would be “an absolute force to be reckoned with.” Her biggest weakness? She’s not a big fan of the word “no”, instead turning it into a “not yet”.

Posting news of her appearance on the show to her Instagram, Rochelle wrote: “I sooo EXCITED! To finally reveal I am a candidate on this years @apprenticeuk

Can’t wait to take you all along for the journey, battling it out in the boardroom, to win Lord Sugar’s investment for @thedollshousemk".

When asked why she deserves Lord Sugar's investment, Rochelle says: "I deserve Lord Sugar’s investment because I know the hair industry like the back of my hand and Lord Sugar knows business."

Rochelle will be one of 18 contestants competing for Lord Sugar's £250,000 business investment in Series 17 of the BBC show, the most contestants since Series 13.

The contestants for the upcoming BBC programme will be flown to Antigua, where they will be tasked with designing and marketing trips to tourists. Other challenges to look forward to this series include the contestants creating their own cartoon, making and selling street food, hosting immersive events and trying their hand at the market of male beauty.

What started in 2005 as a ground-breaking show that included some of the top young business minds in the nation competing for a position with Lord Sugar, has gradually evolved into a more reality TV-inspired fare with prominent figures bragging irreverently about their business prowess.

Next year will mark the 20th anniversary of the series, with Lord Sugar committing more than £3 million of his own money over the years. Originally, the business magnate said he would continue the show for 20 years and then retire.

Nine men and nine women will take part this time and see if they have what it takes to impress Lord Sugar and his advisors, Baroness Karren Brady, Tim Campbell and Claude Littner.