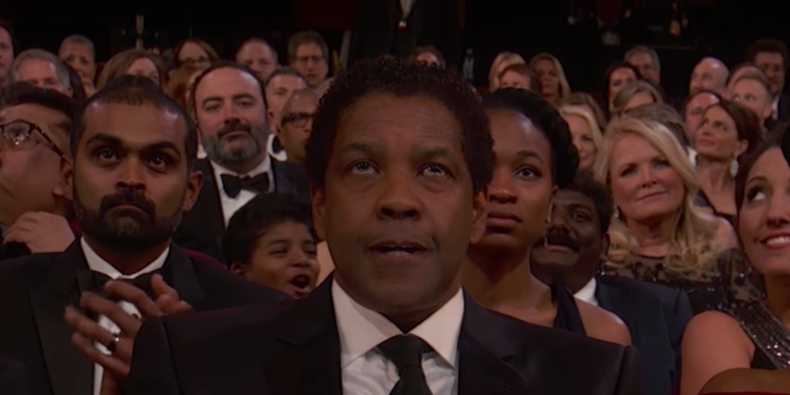 The 1970s were a transformative era for the movies, and it was also a transformative era for Oscars telecasts. No, I don’t mean the 1974 streaker; what I mean was that it was during that decade that the broadcast began to show all of the nominees in the acting categories simultaneously as the winner was being announced, availing us, the couch folk, of seeing the live reactions on the faces of the stars who won—and often more interestingly, those who lost. The winners tend to behave in the same way—a shout, a kiss on the cheek to their partner, and then climbing the stage with a great big smile. It’s the losers who give us the real drama, reacting to the agony of defeat in all sorts of different and at times inappropriate ways. Here, the best of the best.

The only thing more noticeable than the gents’ giant bowties is how stone-faced Duvall remains during the entire thing. You can really tell he's pissed.

Burstyn seems to take her defeat in animated stride, nodding and mouthing, “Okay,” and then following it up with “What a surprise!” It was especially shocking considering that Jackson wasn’t even in attendance.

It’s not a shock that Dunaway, one of the greatest actresses of her generation, took home a statue for one of her best roles. But poor Shire looks like a goth teen who just got her phone taken away.

Lange had won her first of two Oscars the previous year, but still, when Field's name is announced as the victor she looks over her shoulder as if to say, “Seriously? This lady?” The Cruella de Ville-ish shadow on her face isn’t helping, either. Then she had to sit through the infamous “You like me!” speech. Yeah, I can think of one person who really didn’t like Sally Field in that moment.

Yes, it’s Jessica Lange again. Watch as the winner is about to be announced and test out your lip reading skills. It sure looks like she says, “Shit, it’s Page,” before plastering on a smile.

If you watch the footage, even before the announcement, Sally Kirkland’s jaw looks like that of a meth addict with a piece of popcorn stuck in her gums. After Cher takes the prize, she gives an eyeroll for the ages before grinning and clapping. Now that is an Oscar-worthy performance.

An all-time classic of the reaction genre, Jackson (who has only been nominated once, for shame!) let’s out a simple, declarative, “Shit!” If Jackson was going to curse, he should have gone with his signature swear that starts with a "m."

Shockingly, this was the Hollywood legend’s only Oscar nomination. When she loses to Binoche she turns with a stony stare that is the physical embodiment of, “Say what?” It’s perfect.

We’ve all see Reynolds smiling naked on a bear skin rug, so it only makes this scowl that much more affecting.

This screenshot of Law shortly after finding out he lost looks like he’s about to give Caine the old brush under his chin, better known as the Italian middle finger.

This was an actual surprise but there is a big difference between Nicholson saying, “Oh wow!” and Nicholas Cage saying, “What?!”

We may never know what he whispered in Scarlett Johansson’s ear at the end of Lost in Translation—or what evil incantation he was saying at this Oscars.

The Hathahaters will say this is classic Annie overplaying her happiness to mask the rage and hurt inside. Her fans will say it’s honest joy at Winslet’s long-deserved victory. But everyone can agree it’s as tone deaf as her “It came true” when she accepted her own Oscar four years later.

Not even Bellatrix LeStrange could be as witchy. Maybe it had something to do with Leo’s rogue "consider" campaign.

In all fairness, this GIF happened during Affleck’s acceptance speech. Washington could just be paying very close attention to what he’s saying. He could also be plotting revenge or biting his lip and waiting for #TimesUp to catch up with Affleck.

You can just hear the thought in Dafoe's head before his forced smile: "Dang, I really thought it was me."

Not an acting category reaction, of course, but worth remember that if a Tennessee Williams play could become a GIF, it would look like this. Spielberg lets out a resigned, “Wow,” which seems like the most noteworthy thing here, but look at all the other nominees: Behn Zeitlin, a long shot for Beasts of the Southern Wild, just claps, happy to be there. Michael Haneke gives us a “Eh, whatever” and is probably saying something in French about sexual dysfunction and doesn’t care about this award anyway. Meanwhile, David O. Russell is really French actress Emmanuelle Riva, who had lost the Best Actress trophy earlier in the night. What is even going on here?