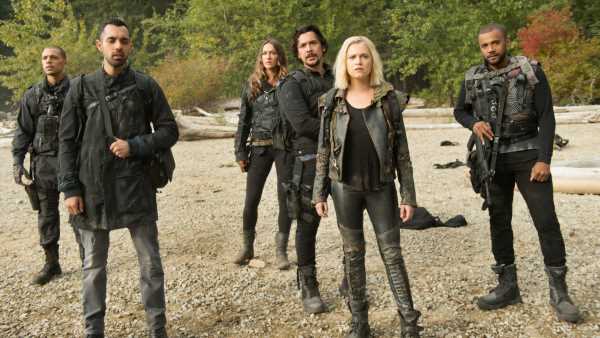 When “The 100” returns for its sixth season on April 30, the CW drama will thrust its characters into a brand new world.

After escaping a no-longer habitable Earth at the end of the fifth season, the characters went into cryostasis until the planet was ready for life again. One hundred and twenty-five years later, Monty and Harper’s adult son Jordan (Shannon Kook) woke them up — but to colonize a new home because Earth was still not sustainable. As with the series premiere back in 2014, when the then-juvenile delinquents were first sent down to test Earth’s hospitality, the sixth season premiere sees them touch down on new land for a new start.

“We were conscious of the fact that there were echoes to what we did in Season 1,” showrunner Jason Rothenberg tells Variety. “But they now come with post-apocalyptic baggage; they are genocidal, blood-drenched characters — even if we love them and are our heroes. We wanted to upend, thematically, what we had been doing. So it is no longer about, how far will you go to survive and at what point does the good guy become bad guy? And it became, can we move past that; can we do better?”

Jordan first woke up Clarke (Eliza Taylor) and Bellamy (Bob Morley), but they will soon bring others — from Raven (Lindsey Morgan) to Murphy (Richard Harmon) to Abby (Paige Turco) into the mix. With Bellamy leading the charge, they will devise a plan to travel to what they think is a new planet, but learn is in fact a moon.

“It started out that Sanctum was a planet for all intents and purposes, in my mind creatively,” Rothenberg says of his writing process. But he wanted to have “this big gas giant in the sky, and was informed by my very, very smart writers that you could never see a gas giant that way if you were another planet; you’d have to be in orbit around that gas giant for it to be that big. So suddenly my planet became a moon.”

Regardless of the scientific details, the world-building in the sixth season was always going to be purposefully different, in order to not only differentiate the physical space from where characters had been before but also introduce new dangers to them. For the former, Rothenberg notes the importance of the production and post-production teams “reinventing the creative palate of the show” and “coloring it differently,” while for the latter, they are also introducing effects-heavy elements such as a light storm he calls “the anomaly.”

“If you look at the visual effects shot in 513 when they’re looking down at the planet out the window, there’s a little bit of a light — like a Borealis on the ground — and that is the anomaly. Raven sees it in 601. And that thing becomes really, really important going forward,” he shares.

Characters such as Russell (J.R. Bourne), who appears to be a leader of the settlers on Sanctum, will also provide new challenges for central characters. Although they have created a “seemingly peaceful world,” Rothenberg says, “will they want to invite strangers from Earth who have all of this blood on their hands to stay?” Additionally, there is more lurking under the surface of Sanctum than what appears at first glance.

And Jordan himself is a great unknown. Rothenberg compares his character — and Kook’s performance — to Gautama Buddha, who was raised without seeing pain, violence and suffering. Before waking up his parents’ friends, Jordan had not met anyone else but his parents, and he had never been outside the ship or eaten anything other than algae.

“He’s in uncharted territory. He is someone who is just wide-eyed, and how long can he stay innocent?” Rothenberg says. “[Buddha] slipped away at some point and it sent him into a tailspin that eventually led to enlightenment. Well, here’s a character who is very similar, and now he’s in the world experiencing it and not all of it will be pleasant.”

But, of course, the baggage characters went to sleep with 125 years ago did not disappear while they were in stasis, either.

“As we start this season, Clarke is clearly still having to deal with the choices she made vis-a-vis the rest of them in the previous season,” Rothenberg says. “She says in 601 she wishes she could go back and do things differently, but she can’t. And the truth is they’ve all done s—-y things, but ultimately that may make it easier for them all to kind of give her a pass, but it’s going to take a little while for that to happen.”

While Rothenberg says “Bellamy will help in trying to heal some of those relationships,” he will be faced with his own conflict with his sister Octavia (Marie Avgeropoulos), who proved willing to have him killed. “He has a lot of resentment towards the person she became,” Rothenberg says, adding that “whether or not” he chooses to forgive her is a story they are telling over the course of the season.

“Octavia right now is lost, and she needs to work her stuff out before he can accept her, and he needs to let her go and not have Octavia be the focus of his entire life, as she has been since she was placed in his hands as an infant when he was seven years old,” he explains.

Most importantly, though, as characters that constantly touch down on other people’s land, part of their journey this season is to finally realize “that they’re the danger in many ways,” Rothenberg says. “This new place is very different than the place that they left. So can they not destroy it? Let’s hope.”