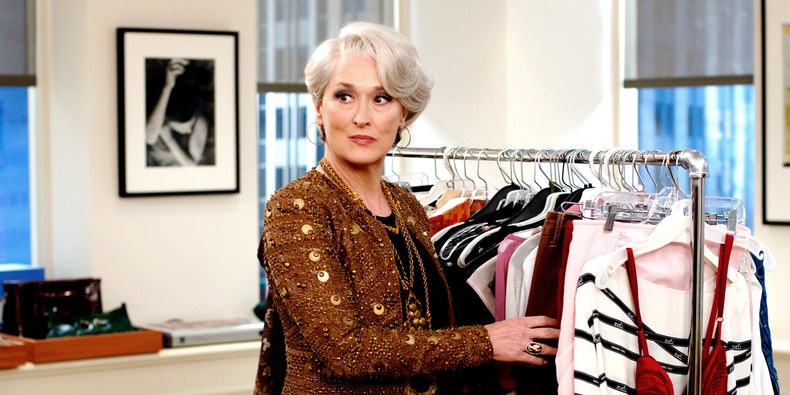 Perhaps one of the most formative moments in Andy Sachs's transformation from frumpy fashion neophyte to chic style star in The Devil Wears Prada comes about a third of the way into the film, when boss Miranda Priestly schools her on the fashion industry's own version of the trickle-down effect. The brief lecture, delivered with perfect, aloof iciness by Meryl Streep, is prompted by Andy (Anne Hathaway) snickering at how seriously a room full of fashion magazine editors are taking fashion, and connects the abashed Andy's own "Casual Corner" cerulean sweater to the high-fashion "stuff" she just disparaged. It's an iconic moment, to be sure—and it was almost completely different, as screenwriter Aline Brosh McKenna and director David Frankel revealed at a screening of the film at the Vulture Festival in Los Angeles on Sunday.

For one thing, that cerulean sweater didn't start off cerulean or as a sweater. "There was a point when [costume designer Patricia Field] thought it was going to be a plaid skirt. I wrote a whole Vivienne Westwood angle—obviously. But there was a sweater, and it was blue," McKenna said, adding that it was Miranda Priestly herself who chose the exact shade of blue she'd mention four separate times in the monologue. "I had also sent Meryl a list of blues: lapis, azure, cerulean. She picked cerulean."

As for how the winding, ranting speech ultimately achieved its admonishing tone, McKenna explained, "The short version is, they sat on the script for a long time, and I made that script speech longer, longer, longer. Then I worked with Meryl and David and made it way too long. I sent it to David and said, 'This is way too long; you'll never use all of this, but this is what I've got.'"

And to those who protest the monologue's use of fake references to other instances of cerulean in various designers' collections—Oscar de la Renta's 2002 collection of cerulean gowns and Yves Saint Laurent's cerulean military jackets, which allegedly prompted eight other designers to infuse the color into their own lines—McKenna and Frankel couldn't care less. "A lot of the fashion stuff I just made up because none of it was going to be real; it just sounded real," McKenna said. "After the movie came out, someone was dinging us that it wasn't based on real fashion stuff. I called David and I was upset and he said, 'Well, you know, when they make their movie and it makes $325 million worldwide and it gets nominated for Oscars, they can do it however they want!'" she continued, prompting Frankel to mime a perfectly fitting mic drop.

Here, in all its glory, is that most memorable of put-downs.

Related: The Devil Wears Prada Musical Is Being Soundtracked by Elton John and Composer Shaina Taub