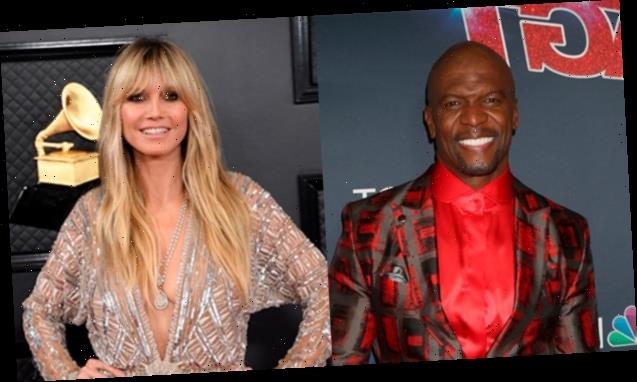 Following Heidi Klum’s exit from ‘AGT’ in 2018, Terry Crews is ‘super happy’ that the model is his co-worker once again! She is now judging Season 2 of the series’ spin-off series, ‘The Champions.’

Heidi Klum, 46, is back in a judge’s seat for America’s Got Talent: The Champions — and Terry Crews, 51, the host of the series, couldn’t be more delighted. Ten days after the second season of AGT‘s spin-off series premiered on Jan. 6, HollywoodLife caught up with Terry to ask how he feels about Heidi’s new gig, after she served as a judge on the original talent competition show between 2011-2018. “She’s awesome! Heidi is the best, AGT is fabulous,” Terry gushed at Steven Tyler’s GRAMMY Awards Viewing Party on Jan. 26.

He’s especially excited that Heidi’s on-board for the sophomore season of The Champions, in which standout contestants from past seasons within the Got Talent franchise compete for the prestigious “World Champion” title. “The Champions, you know, what we’re doing right now it’s the best of the best,” Terry continued. “It’s been going very, very well and I am super, super happy. I love what’s going on and look forward to the summer version.”

Heidi shares Terry’s level of excitement. “I love all these people,” Heidi had EXCLUSIVELY told HollywoodLife when we chatted with her at Pasadena Civic Auditorium, where AGT: The Champions was filmed. She added, “I love being back. It’s a family affair and I am very honored to be back on AGT.”

Heidi talked to us before the controversy between Gabrielle Union and AGT erupted. Neither Gabrielle nor Julianne Hough’s contracts were renewed, and a Nov. 2019 report claimed that Gabrielle had previously brought up concerns of racial insensitivity allegedly witnessed on set — Heidi, however, later defended the show against the report. “I’ve only had an amazing experience. I can’t speak for [Gabrielle]. I didn’t experience the same thing,” Heidi said at the Television Critics Association in Jan. 2020, per USA Today. She added, “To me, everyone treats you with the utmost respect. I’ve never seen anything that was weird or hurtful.”

Heidi was backed up by Terry, who essentially said the same thing on the Jan. 23 episode of 3rd Hour of Today. He denied experiencing “racism comments” on set, and although Gabrielle didn’t call out specific names, she shaded a certain someone on Twitter for throwing her “under the bus.”

AGT drama aside, though, Terry is looking forward to the Season 7 premiere of his other show, Brooklyn Nine-Nine, which airs on Feb. 6. He’ll also be handing out his new children’s book, Come Find Me, with his team to kindergarteners and first-graders on Valentine’s Day.