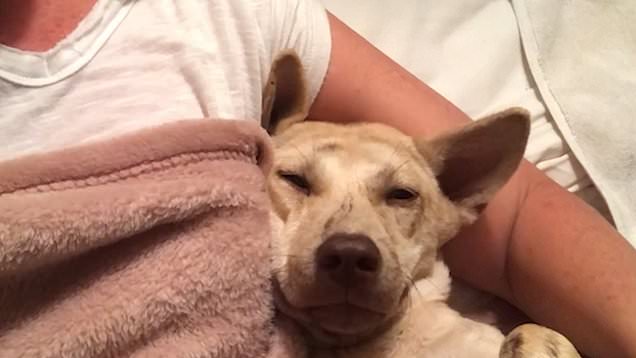 A skeletal dog who was limping and shaking on the side of the road has had an incredible transformation after he was rescued.

The abandoned puppy was found cowering in terror in Bali, Indonesia, and the animal wouldn’t allow humans to come close.

But, since being saved from the traffic, the puppy – now called Murphy – has become a happy and healthy dog.

Prue Barber, 42 and the founder of dog rescue organisation ‘Mission Paws’ible’, found the frightened animal and, after weeks of care and attention, watched as he regained trust.

‘I spotted Murphy laying in the middle of the road,’ says Prue. ‘I have terrible eyesight and as a rescuer we often think a plastic bag is an animal.

‘When I spotted the “white plastic bag”, I drove towards it and hoped it was not a puppy. It was. Trucks, cars and bikes were avoiding him, but no one stopped.’ 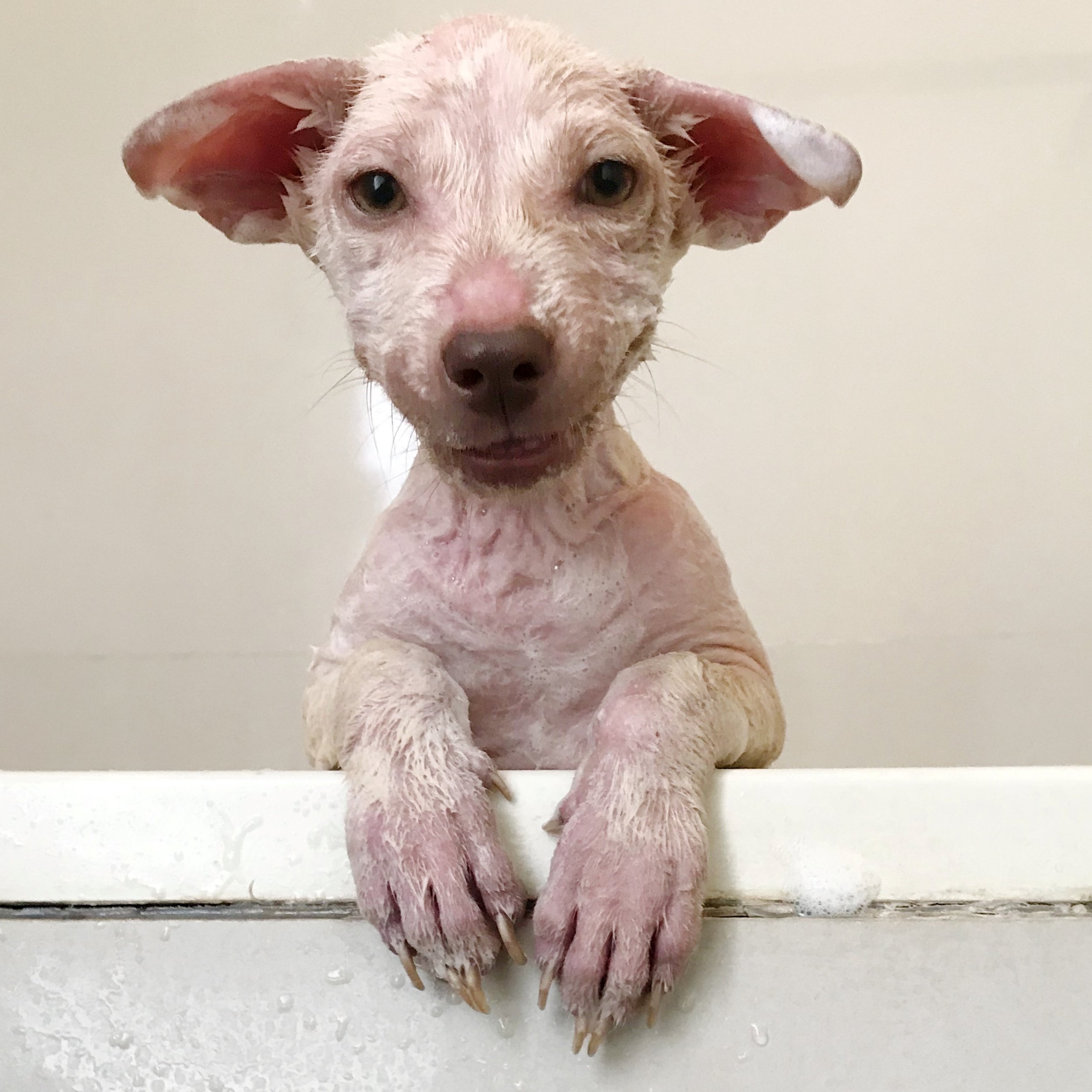 Prue says Murphy had likely been dumped and was visibly distressed.

‘I didn’t rush him because I didn’t want him to go in front of the traffic,’ she says.

‘The initial rescue was scary for us both. A lot of screaming from Murphy, which is normal but after a few minutes, he calmed down and I put the box on the scooter and took him back to my house.

‘He was very scared and spent a week in my laundry until he learnt to trust me. I gave him time and space.’

Murphy was distant at first and spent the first week after his rescue in solitude, defensive and not wanting to be touched.

But Murphy’s fun loving personality has now finally emerged, and he seems full of life.

‘After a few days, he watched how I was with the other foster dogs and started to warm up to me,’ says Prue. ‘He came into the house all on his own and let his guard down. From that day on, he turned into the playful and loveable dog that he is today.’

When Murphy arrived at the centre he was suffering from scabies, so Prue started him on a nutritious raw food diet with a natural immune boosting supplement, organic bone broth, Neem Shampoo washes and healing oil for the scabies.

‘In two weeks, he was scabies free, had his first vaccination and blended into the pack,’ she says. ‘His leg is a birth defect that can’t be rectified.’

They have supported thousands of dogs over the past few years and their aim is to stop the suffering and reduce the dumping of animals in Bali.

The organisation is raising funds to build The Healing Centre, a custom designed safe haven that will provide up to 40 sick dogs a quiet place to decompress and heal giving them a second chance in life and being adopted.

‘The main challenge is patience and time,’ says Prue. ‘Many rescues need a safe space to decompress, settle into their new environment and learn to trust.

‘For Murphy, trust was the main issue. He had severe fear of people. But within one week he was snuggling with me on the couch.

‘Having rehabilitated many cases similar to Murphy the feeling was the same, a rollercoaster of emotions. Anger and frustration at the human race. Sadness, deep pure love and gratitude to be able to help these voiceless animals. Their faith, trust and willingness to love humans again is inspiring.’

‘He is everyone’s best mate,’ says Murphy. ‘At particular times of the day he will run around like crazy revving up the pack.

‘He even gets the older dogs playing chase. He will also approach dogs that want nothing to do with them and lick their mouth and even they succumb to his sweet personality.’

‘Towards humans, he takes about five minutes to work you out and then he will just come up, wag his tail and plonk himself on top of you and stare into your eyes.’

She adds that there is just something special about this little dog.

‘He really is pure happiness,’ she says. ‘He lightens the energy where ever he goes. He is an entertainer, a friend and bloody great dog.

‘I want people to know that anyone is capable of rescuing an animal and that all it takes is a little bit of compassion, kindness and patience.

‘Rescue dogs are so grateful for the second chance you give them and they make the most wonderfully loyal and loving pets.’