Tech giants Apple, Facebook and Google paid a record $216 million in company tax after raising more than $11 billion in revenue from their Australian customers, new figures show, but the federal budget remains hostage to the profits and taxes of a handful of companies. 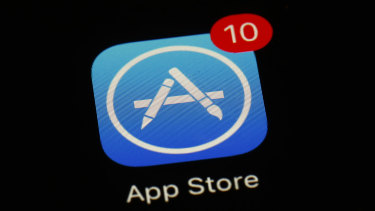 Apple and fellow tech giants Facebook and Google paid a record amount of tax in 2018-19, but still well short of miners, banks and supermarkets.Credit:AP

The three firms have been the long-term target of the Gillard, Abbott, Turnbull and now Morrison governments to increase their company tax payments.

Apple, which was the 29th largest entity by revenues, was the 51st in terms of the tax it paid.

The second largest taxpayer was BHP Billiton group, which had revenues of $43.1 billion and a taxable income of $16.3 billion. It paid $4.2 billion in company tax, a $700 million increase on the previous year.

The Commonwealth Bank, the largest taxpayer over recent years, paid $3.3 billion in tax on revenues of $43.3 billion, $1 billion less tax than the year before.

While iron ore companies such as Rio, BHP and Fortescue swelled government coffers, the oil and gas sector continued to show huge revenues but no tax.

"The ATO takes steps to verify that losses in the large market are not created through contrived schemes, but actual losses that can be traced back to commercial operations. Companies that report sustained losses year-on-year face scrutiny from the Tax Avoidance Taskforce," she said.

Amongst the nation's media companies, Nine Entertainment – publisher of this masthead – paid $47.8 million in tax on taxable income of $175.6 million and revenues of $2.5 billion.

Seven West Media paid $23.6 million in tax on $101 million of taxable income after revenues of $1.8 billion while News Australia Holdings declared no taxable income on its $2.1 billion in revenue.