The federal government will rebuff pleas from state governments for financial aid to cover the cost of short lockdowns amid a ferocious row with the Victorian government over how much financial assistance should be given to workers and businesses affected by the seven-day shutdown.

The stance leaves no room for negotiation over the Victorian government’s repeated requests for help after Acting Premier James Merlino on Sunday described the Morrison government as “disgraceful” for deciding against providing additional financial support when it was responsible for programs such as wage subsidies. 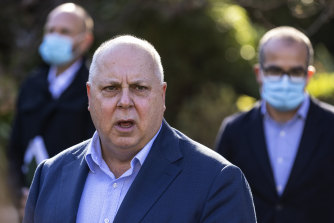 Victorian Treasurer Tim Pallas vented his frustration at the Morrison government for its lack of support.Credit:Getty

Prime Minister Scott Morrison and Treasurer Josh Frydenberg countered that other states had not asked for federal payments during recent restrictions, making it clear that a seven-day lockdown did not warrant a revival of the JobKeeper scheme which ended in March. The split has underlined serious tensions between the Victorian and federal governments and will fuel the ongoing debate about which parts of the federation should be responsible for the financial impact of the coronavirus pandemic.

Mr Frydenberg told The Age and The Sydney Morning Herald that Victoria and other states continued to receive help from federal budget spending but special payments had not been required when Queensland and Western Australia imposed brief lockdowns.

“This is not the first lockdown post-JobKeeper and extra support from the federal government was not required in those cases,” Mr Frydenberg said. “We continue to provide substantial support to the Victorian community but this is a short lockdown, not an extended lockdown, and the measures that we put in place in the budget will continue to support the Victorian economy during this challenging COVID period.” 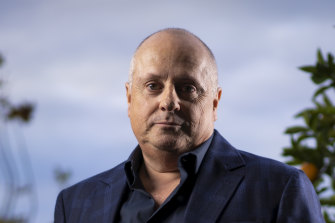 Restraurateur Chris Lucas has blasted the Victorian government over its handling of the pandemic.Credit:Eamon Gallagher

The federal position does not rule out future assistance to states and territories for longer lockdowns, depending upon the severity of the situation, but is based on a belief inside the Morrison government that Victorian leaders must take primary responsibility for the response.

The funding fight marks one of the lowest points in state relations with Canberra after Mr Merlino and Victorian Treasurer Tim Pallas phoned Mr Morrison and Mr Frydenberg in recent days asking for federal funds to match the $250 million in Victorian support for businesses, announced on Sunday.

Mr Merlino announced on Sunday about 90,000 Victorian businesses affected by this week’s lockdown will share in the “Circuit Breaker Business Support” package including grants of $2500 for eligible businesses including cafes, restaurants, event suppliers, accommodation providers and non-essential retailers. Additional grants of $3500 will be offered to licensed venues, and the state government has allocated $20 million for operators in the events industry.

Treasurer Tim Pallas said businesses could register their interest in the Business Costs Assistance Program to be notified when applications open this week. He hoped some of those payments would begin to flow by the end of the week.

“They’re not a silent partner, they like making speeches. I’ll tell you what they’re not: they’re not a tangible partner, they need to step up to the plate,” he said. “I am angry and I’m disappointed. I’m disappointed because all the language talks about a partnership. It delivers nothing in real terms for the people who need it most. They like to pride themselves on being the party of the forgotten people. Well, the people they seem to have forgotten is Victorians, and in particular Victorian workers.”

Prominent Melbourne restaurateur Chris Lucas, who founded restaurants Chin Chin, Kisume, Hawker Hall and Baby, slammed the Victorian government for what he called its hypocrisy and ineptitude to effectively manage coronavirus outbreaks despite being 18 months into the pandemic. He blasted Mr Pallas’ business support package as “pathetic compensation” and said the state government must instead focus on strengthening its systems to prevent lockdowns.

“The compensation is not the issue because a few thousand dollars will never ever come close to dealing with the cost and trauma that is being caused by these incessant lockdowns,” Mr Lucas told The Age and Herald. “My staff, over 1400 of them, have been traumatised in the last week and continue to be on a knife’s edge mentally having now faced nearly 200 days of lockdown in Victoria.”

“In my view, the issue is not about some pathetic compensation, but it’s about the ineptitude of a government that continues to fail its citizens. The government needs to learn its lessons, stop trying to shift the blame, be honest and more transparent with the Victorian public who are suffering incredibly as a result of the unnecessary lockdowns.” 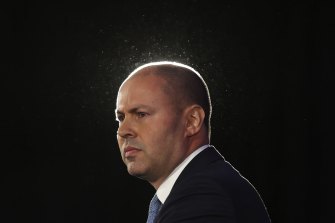 Treasurer Josh Frydenberg: this is not the first state to lock down post JobKeeper.Credit:Alex Ellinghausen

Opposition Leader Michael O’Brien accused Mr Pallas and Mr Merlino of “playing politics” instead of focusing on the welfare of Victorians.

“This is a government that has caused the fourth lockdown through poor QR codes and contact tracing that had holes in it,” he said. “For them to try and put the blame on everyone but themselves just shows this is all politics for Labor.”

“It’s not the workers’, it’s not the businesses fault that we find ourselves back in lockdown. We’re at the end of the queue here, and we want to make sure that everybody gets through … There are opportunities up north, and if [workers] leave Victoria, our ability to bounce back is going to be highly compromised.”

Federal Coalition MPs accused the Victorian government of trying to distract from its own “ineptitude” by fighting with Mr Morrison and Mr Frydenberg.

“I think that most Australians see straight through the petty sniping from the Victorian Acting Premier,” said Western Australian Liberal Senator Ben Small, whose state had a lockdown without additional federal financial support.

Nationals MP Anne Webster, whose electorate of Mallee is centred on the regional Victorian city of Mildura, said the lockdown had to stop in regional parts of the state.

“Once again [we are] affected by urban policy, as though we all live in Port Melbourne,” she said. “Why can NSW manage outbreaks without a statewide lockdown but Victoria can’t?”

But there was caution from some business groups seeking federal help for members without encouraging state governments to lock down more than necessary.

“The federal government needs to look seriously at what it can do to alleviate the pain associated with lockdowns while at the same time maintaining incentives for state governments to effectively manage their outbreaks,” the acting boss of the Australian Chamber of Commerce and Industry, Jenny Lambert, said.

Get our Coronavirus Update newsletter

Stay across the news you need to know related to the pandemic. Sent Monday and Thursday. Sign up here.