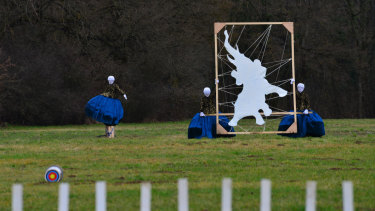 The whole ensemble is ingenious, the effect somewhere between ridiculous and menacing.

Swiss.Style is a mini-festival of Swiss contemporary dance, presented over two weekends at Dancehouse and with a program of public film screenings at Federation Square. The first weekend showcases a selection of works by Cindy van Acker and Rudi van der Merwe, who give Melbourne a taste of Switzerland’s clean, precise, but also witty and irreverent contemporary dance scene.

I approached Van der Merwe’s Trophy (“a site-specific performance on the themes of hunting, conquest and military tradition”) with some trepidation. But what, going from the description, could have been a colossal, pretentious bore – is in fact delightfully humorous and thoroughly enjoyable. It is set in a park with a long line of sight, all the better to observe a three-strong phalanx of knights/court ladies advancing towards us in an interminable, meandering, courtly march. Dressed in crinolines and ornate riding jackets, the mixed-gender cast (showing uniformly handsome legs!) is also equipped with white gloves and full white head covers (ingeniously crafted from lace and riding helmets), which makes them resemble traffic police. The whole ensemble is ingenious, the effect somewhere between ridiculous and menacing: one does consider that those European conquerors of foreign continents wore absurd dresses, but their advances were no less brutal for it.

As they approach the white picket fence, which they then dismantle and reconfigure – first into swords and then, in a feat of visual dramaturgy, into a Christian cemetery – the three masked figures shape their anonymous bodies into an array of dignified poses. It is a choreography of privilege and power: from armoured cavalry to a baroque court. But they are, nevertheless, standing in a paddock.

Distinguished Belgian-Genevan choreographer Cindy van Acker’s collaborators include Myriam Gourfink and Xavier Le Roy, as well as Romeo Castellucci with whom she has collaborated on Inferno and Purgatorio, as well as a string of operas. In Melbourne, she presents a program of four solos, all excellent. 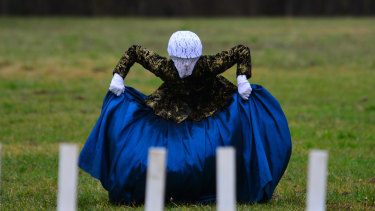 Trophy by Rudi van der Merwe, a choreography of privilege and power.

Van Acker’s choreographic language is minimal, based in ballet but quite mechanical in flavour, and extremely attuned to music. Matthieu Chayrigues embodies Morton Feldman’s Rothko Chapel (1972): his footsteps the drumbeat, his arms the viola, his upper body movements delicate, magically precise.

Stephanie Bayle’s piece finds geometry and art in the most ordinary movement: reading from a scrap of paper, or shuffling hands in her pockets. As Fred Frith’s No Birds composition builds from atonal to a full, electric guitar-driven boogie, she steps to the edge of the space, as if pushed by the music’s growing volume. Laure Lescoffy, in the downstairs space, dances to an early electronic track in a surprising counterpoint of rising and falling movement: strong and fast going up, slow and droopy on its way down. Finally, van Acker herself embodies – there is no other way to put it – Mika Vainio’s 2013 industrial piece Load: arm marking the staccato beat, head banging to the tense texture of the sound, feet barely moving.

Each subsequent solo seems to last half of the previous, so that we start with a 35-minute Chayrigues and end with barely a few minutes of van Acker. The sense of not-enoughness is palpable. If you have missed van Acker at Dancehouse, at least her dance films at Federation Square are free to see.