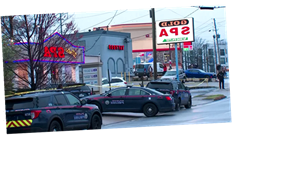 Authorities said the suspect in the deadly shootings at three Atlanta-area spas admitted to carrying out Tuesday evening’s rampage and was on his way to Florida, where officials feared he would harm more people. “As tragic as this was … this could have been significantly worse,” Atlanta Mayor Keisha Lance Bottoms told reporters.

Captain Jay Baker of the Cherokee County Sheriff’s Office said during a Wednesday morning press conference the 21-year-old suspect claimed the shootings weren’t racially motivated even though six of the eight people killed were of Asian descent.

Instead, the suspect indicated he “has some issues, potentially sexual addiction,” Cherokee County Sheriff Frank Reynolds said. He saw the spas as a temptation that he wanted to eliminate, Baker said.

Cherokee County police identified the suspect as 21-year-old Robert Aaron Long, who was taken into custody 150 miles south of Atlanta. Investigators believe he was acting alone.

The targeted businesses were not on the Atlanta Police Department’s radar, Bottoms said, describing the spas as “legally operating.” Six of the victims were identified as women of Asian descent, CBS affiliate WGCL-TV reports. Four of the victims are of Korean descent, South Korea’s Foreign Ministry confirmed to CBS News.

The other victims were identified as a White woman and a White man, WGCL-TV reports. Police wouldn’t say whether any of the slain victims worked at the spas.

Baker didn’t know if the suspect expressed remorse to investigators, but Baker said they got the impression he understood the gravity of his alleged actions. “He was pretty much fed up and had been kind of at the end of his rope, and yesterday was a really bad day for him, and this is what he did,” Baker said.

The string of shootings started Tuesday evening at a spa in Cherokee County, 30 miles north of Atlanta. In Atlanta, police later responded to shootings at two spas across the street from one another.

Vice President Kamala Harris said Wednesday that she and President Biden “grieve for the loss.”

“The investigation is ongoing. We don’t yet know, we’re not yet clear about the motive. But I do want to say to our Asian-American community that we stand with you and understand how this has frightened and shocked and outraged all people,” she said.