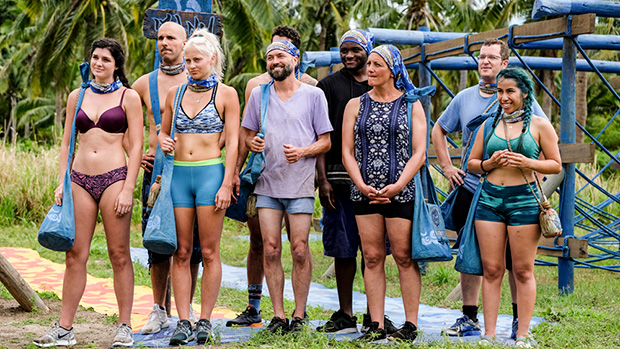 Ahead of the season 38 premiere of ‘Survivor,’ we’re breaking down the season’s biggest twist, ‘Edge of Extinction.’ Here’s what you need to know about the BIG change to the game!

Survivor producers are constantly bringing new elements to the game, and season 38 may feature the biggest twist EVER! This season, Survivor: Edge of Extinction, will test players like never before, and Jeff Probst explained just how ahead of the Feb. 20 premiere.  The ‘Edge of Extinction’ twist won’t come into play until someone is voted out of the game, and they’ll be left with a major decision. “You don’t know this, it’s a secret, but when you’re voted out, you’re going to leave Tribal and walk around the corner and finally come to this lighted torch with a signpost,” Jeff told Entertainment Weekly. “And the signpost will say, ‘You have a decision to make. If you’re done playing and you want your adventure to end, keep walking. If, however, you want a chance to get back in the game, take the torch and get in the boat.’ That’s all you know.”

The players will have NO idea what they’re in for if they choose to stay in the game, and will have to decide on the spot if they want to “go into the unknown” for another shot at the game. “Where they’re going is Edge of Extinction,” Jeff said. “You will arrive at night in pitch black with a lighted torch to a beach. And the first person there will be the only person there — and that’s it.” Those who choose to go to the Edge of Extinction won’t have ANY idea what’s to come, but Jeff promised viewers that it will not be a cakewalk.

“Everything that you do will require way more effort than you were doing back on that thing that you thought was tough called Survivor,” he admitted. “And you’re doing it all on the idea that you have a shot to get back in.” Luckily, if it gets to be too much, players are allowed to throw in the towel — all they have to do is “raise a sail and a boat will come get [them].”

Survivor has used a similar twist called Redemption Island in seasons past, where players who were voted out got to compete in challenges against each other to earn a spot back in the game. However, this will be much more intense and difficult than that. “I just want to go deeper with Survivor,” Jeff said. “I love the game play. I love the twists and idols. We’ve worked hard to create this element of gameplay. Now we want to see…why are people playing? Is it really just to find an idol and win a million dollars? Okay, then if you’re voted out, you’ll probably go home. But if there’s something stirring inside you and you’re posed with this question of ‘Wait, I could maybe get back in?’ then maybe you’ll push yourself a little further and see what you’re made of.”

Jeff did not reveal how the players will get their opportunity to get back in the game, but it’s safe to say that the cast will be pushed more than ever before this season. Survivor: Edge of Extinction features 14 new players and four returning ones. The returning contestants are Kelley Wentworth, Joe Anglim, Aubry Bracco and David Wright. The new season premieres Feb. 20 at 8:00 p.m. on CBS.