“This new organ, it’s shifting my pain centres,” rasps performance artist Saul Tenser (Viggo Mortensen), a gaunt weirdo who dresses like the medieval image of Death and specialises in having his partner Caprice (Lea Seydoux) perform surgery on his constantly evolving carcass.

In other words, David Cronenberg is back, and it’s about time. Crimes of the Future is not only the first feature he’s directed in eight years, but also the first since 1999’s eXistenZ to be based on his own original script – and like eXistenZ, it has a lightness he achieves less often with other people’s material. 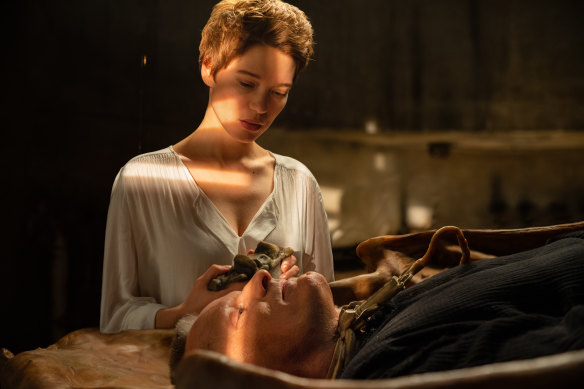 This won’t hurt a bit: Viggo Mortensen and Lea Seydoux in Crimes of the Future.Credit:

This may be the most openly jokey and self-referential film of his career, riffing on his enduring reputation for “body horror” and recycling the title of an only loosely related film he shot more than 50 years ago.

On this occasion, the future is envisaged as a luxuriantly decrepit no-place (the locations were in Athens) where the apparent remnants of humanity have largely ceased to experience pain, except in dreams. All kinds of new thresholds and anatomies have thus come into view, embraced by some and fiercely resisted by others.

The briskly told story opens with a mother (Lihi Kornowski) murdering her young son (Sozos Sotiris), a mutant with the ability to devour plastic. Saul and Caprice are asked to perform a public autopsy, meanwhile wrestling with other concerns, such as whether Saul has a shot at Best Original Organ at the next Inner Beauty Pageant.

This pageant is occurring under the auspices of the National Organ Registry, a semi-official institution run along the lines of a fringe theatre company, with records in ring-binders rather than computers (notably absent throughout, one of many hints that what we’re seeing is Cronenberg’s personal happy place).

Staffing the crumbling headquarters are yet another odd couple, played by Canadian cinematic mainstay Don McKellar and celebrity guest star Kristen Stewart – and where most of the cast are called on to utter Cronenberg’s epigrams deadpan, Stewart is comically unleashed as never before, flickering her eyes like a snake and speaking in a rapid malevolent half-whisper.

The need to keep this excitement under a semblance of control is one subject of Crimes of the Future, at bottom an elegant and civilised comedy of manners. The manners, admittedly, are not entirely the usual ones – but that’s only to be expected, when the other subject is the artist’s eternal struggle to create something new.