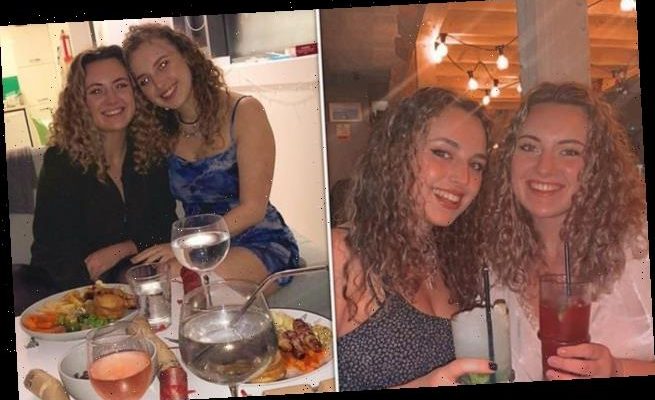 Student, 19, discovers she’s moved in with her ‘long-lost twin’ at university after meeting a woman with an ‘uncanny likeness’ to her in the kitchen of their shared flat

Everyone had a secret desire to discover that they had a long-lost twin after watching the 90s comedy classic The Parent Trap starring Lindsey Lohan.

And one student lived out this baffling moment in real life after moving in with a girl who looked so similar to her that she quipped that they could be ‘long-lost twins’.

Amy Harriet, 19, from London, was left gobsmacked after coming face-to-face with Grace Castle, 20, from East Sussex, for the first time at the University of Birmingham.

Amy, a drama and performing arts student, joked that she thought she had met her ‘long-lost’ twin when they met in the kitchen of their flat because they look exactly ‘the same’. 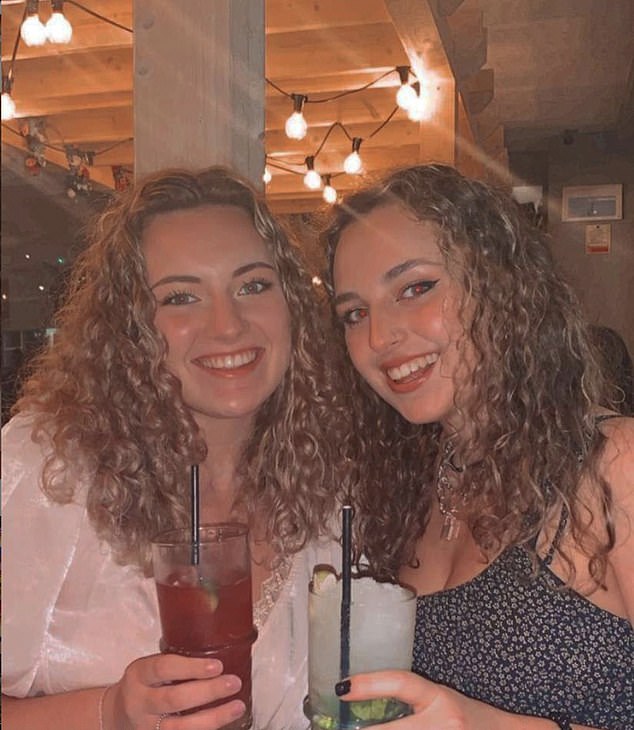 Amy Harriet (right), 19, from London, was left gobsmacked after coming face-to-face with her ‘long-lost twin’ Grace Castle (left) from East Sussex, at the University of Birmingham

Sharing the unbelievable story on TikTok, Amy revealed that their birthdays are coincidentally less than 24 hours apart, although Grace was born almost exactly one year earlier.

Amy shared a selection of photographs of herself and Grace to prove their unbelievable similarities, including their golden curly hair, blue eyes and face shape.

In the video, she explained: ‘I think I met my long-lost twin at Uni and she’s my flatmate. This is us, what why do we look the same? The weirdest part is our birthdays are a day apart.’

Shocked TikTok users urged Grace and Amy to get a DNA test as they likened her situation to The Parent Trap, but Amy confirmed to MailOnline that they have no plans to do a biological test.

Amy also admitted that they never actually believed they were twins but found it ‘hilarious’ when they first met and realised how similar they looked.

She continued: ‘We do look alike but we never actually thought we were twins! It was hilarious when we first saw each other the day we moved into our flat, seeing how alike we look, and then finding out our birthdays are a day apart. 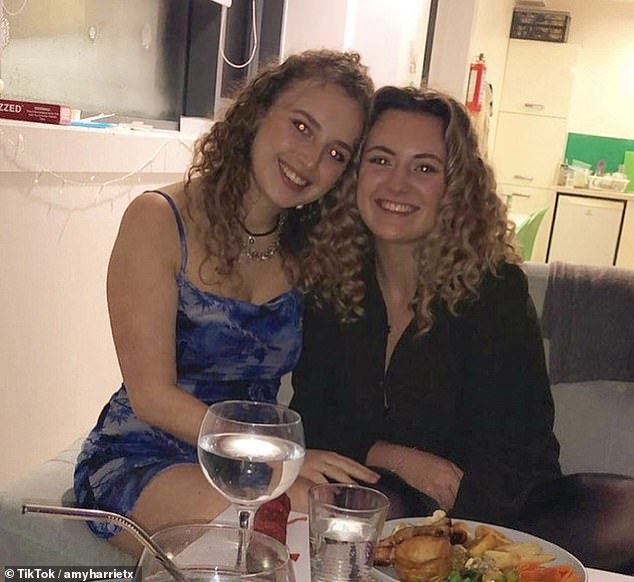 Amy (left), a drama and performing arts student, said she thought she had met her ‘long-lost’ twin when she met Grace (right) in the kitchen of their flat because they look exactly ‘the same’

‘We’re really good friends and we are finding this whole thing so funny and will definitely laugh at all the articles in years to come.’

She added: ‘My “twin” and I will not be doing a DNA test. The video was for entertainment purposes only!

‘However, I’m glad it made people smile in a time like this, and The Parent Trap will always be one of my favourite movies!’

Amy explained that she had been talking to Grace on Snapchat during the summer and they had agreed to move into their student flat on the same day.

She told The Tab: ‘We were already getting on really well before we got to uni [so] we decided to move in on the same day, and were the first of our flat to arrive.’

Despite speaking on social media, their likeness still came as a ‘genuine surprise to Amy as she hadn’t seen Grace without a ‘Snapchat filter’ so didn’t realise how similar they actually looked. 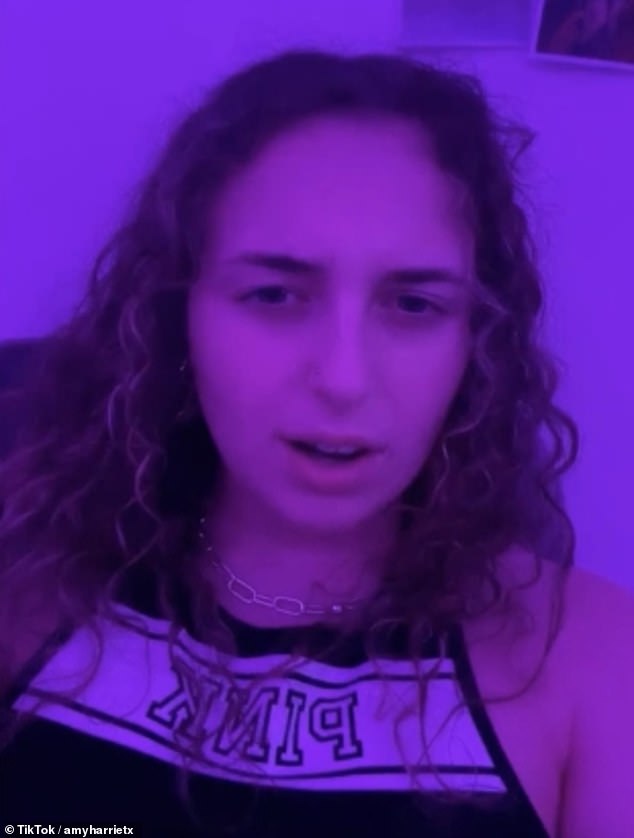 Sharing the unbelievable story on TikTok , Amy (pictured) revealed that their birthdays are less than 24 hours apart, although Grace, 20, was born almost exactly one year earlier

The flatmates then discovered that their birthdays are incredibly just one day apart, but Amy confirmed that Grace is one year older than her, meaning that despite their unbelievable resemblance, they cannot be biological twins.

Amy’s incredible TikTok video has since racked up more than five million views, while gobsmacked users urged the two women to get a DNA test.

One person commented: ‘I fully gasped’

While another penned: ‘Bro get DNA tests… they sell them in Home Bargains.’

And a third made reference to The Parent Trap, writing: ‘So you know you have to go home to each other’s families now.’

A fourth asked: ‘Have you asked your parents? What did they say?’