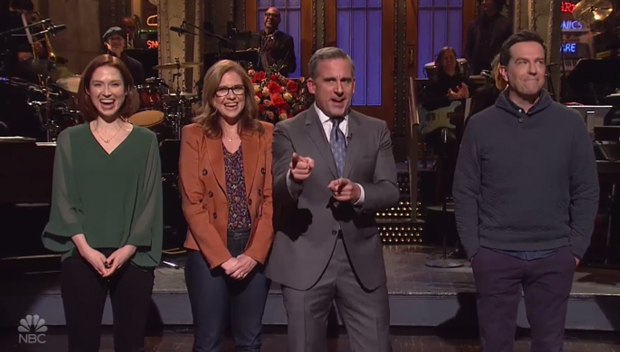 Steve Carell spent his entire opening monologue teasing a reboot of ‘The Office’ & he did so with the help of four his fellow co-stars, including his wife Nancy! Watch it here!

We love Steve Carrell hosting SNL more than… more than… more than Brick loves lamp. And he started off this time hosting the variety show with a bang! Steve’s monologue  had cameos from four of his old Office co-stars, Ed Helms, Jenna Fisher, Ellie Kemper… and Steve’s wife Nancy (who played his realtor, and former flame Carol) and their kids. And they had one thing on their mind: a reboot of The Office. Like all of us, they want it so badly. Jenna also recalled Pam’s last words to Michael Scott: “Don’t be a dick. Do the reboot.” We could not agree more. Watch his opening monologue below.

There have already been so many memorable moments that happened in the show’s opening monologue this past season. Let’s take Seth Meyers, for instance. Not only did the Late Night host kill it in the various sketches throughout the night, he also dropped a huge truth bomb on viewers. Kanye West had opted to do a sketch about interrupting people at awards shows… before he actually interrupted Taylor Swift at the 2009 VMAs.

Another fun opening monologue involved Adam Driver. While the host seemed uninterested with the various cast members’ summers, he took a particular interest in Pete Davidson‘s (cough, Ariana Grande, cough). Of course, Pete decided not to reveal anything and just winked instead. That was before he and Ariana inevitably split.

We’ll keep you posted with all of the latest SNL sketches. In the meantime, check out all of the photos from this season in our gallery above.