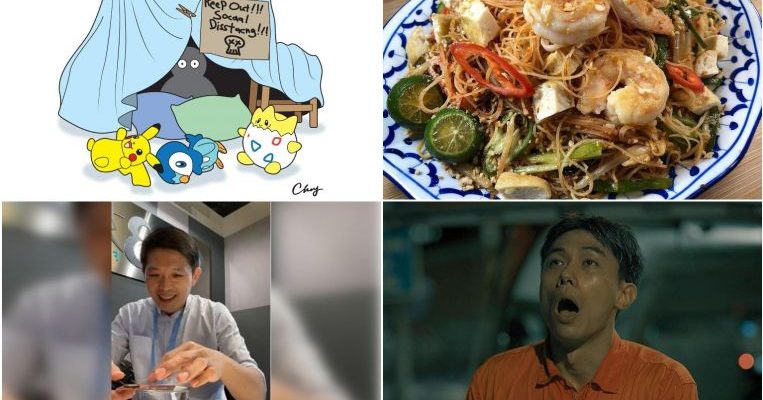 My son, Adam, refused to come out of his cave for a whole day. Well, it’s not a cave, really, more like a tent built out of two chairs, a kid-size bed sheet and a dozen or so clothes pegs.

He was upset and wanted to be left alone, he announced to us. The night before, we had watched a news report on television, fully absorbed in the images of medical personnel clad in blue PPE suits sticking long sticks deep into people’s noses, patients lying on beds, their deathly pale faces mired in helpless misery. My son, beside me, had watched all this silently, and who knows what he had understood or not understood from what he had seen.

“Do you want to come out?” I asked, kneeling beside the tent. Pikachu and his merry band of friends, Piplup, Sparky and Togepi, playing all over the bed sheet, in bright fiery colours.

Rice vermicelli or beehoon is a staple that most home cooks would have in the pantry. If you want fried beehoon with spice and tang, try cooking fried mee siam.

As I did not have dried shrimp in my fridge, I used dried prawns instead.

While I have included the recipe for the spice paste, you can use store-bought mee siam paste if you want to simplify the recipe.

Want to know how the presenters from SPH Radio’s Mandarin station 96.3 Hao FM are keeping themselves busy during the pandemic?

All is revealed in this light-hearted video series, called Our Everyday Snippets (Hao Ri Chang), where the presenters chat about the variety of activities and challenges they have been up to.

The videos go live on 96.3 Hao FM’s Facebook page every Sunday at 3pm, with each livestream lasting around 30 to 45 minutes.

For example, on May 31, assistant programme director Wen Guo Xian showed viewers how he retrieved a piece of paper from underneath an upturned bottle and how to balance a card on the rim of a glass. Who knew daily household objects could bring so much joy?

4. TUNE IN TO: Crime series Code Of Law

A spin-off of legal drama series The Pupil (2010 to 2011), Code Of Law is now Singapore’s longest-running English-language crime series.

Its fifth season, Code Of Law: Final, is its latest instalment, so expect plenty of drama and intrigue.

Local actor Desmond Tan, who returns as serial killer Derek, told The Straits Times in a recent interview: “Derek is going to be getting a taste of his own medicine. We have seen him torturing people previously, but this season, he will have some painful experiences of his own.”

The show airs every Monday at 9.30pm on Channel 5 and is also available on meWatch.