MORRISTOWN, N.J. (Reuters) – James Garland dropped off 9-year-old Harry, costumed in a tie-dyed T-shirt and hippie-style neck bandana, at the Halloween party with his buddies, confident he would have fun and return home exhausted – and wagging his tail.

“That’s our kid,” said Garland, 60, an attorney from Morris Township, New Jersey, who has no children. He gazed at Harry, an English Cocker Spaniel, as he bounded into Wuffstock, the Halloween party at Morris Animal Inn in neighboring Morristown.

Black cats, bats and spiders have endured as Halloween ambassadors of the animal kingdom, but dogs are nuzzling their way into the holiday spotlight.

Increasingly, dogs star in spooky home decorations, greet trick or treaters and snatch most of the estimated $480 million Americans will spend on pet costumes this holiday.

Even the ultimate Halloween symbol – the jack-o’-lantern – is going to the dogs. Social media brims with photographs and how-to videos for carving pumpkins to resemble Pomeranians, King Charles Cavaliers, German Shepherds and other breeds.

Outpaced only by Christmas, Halloween has become the No. 2 U.S. holiday in terms of spending, much of it doled out by the more than one-third of U.S. households that own dogs.

An unprecedented 31.3 million Americans plan to costume their pets this year. The largest group of these are millennials aged 25 to 34, the National Retail Federation said. 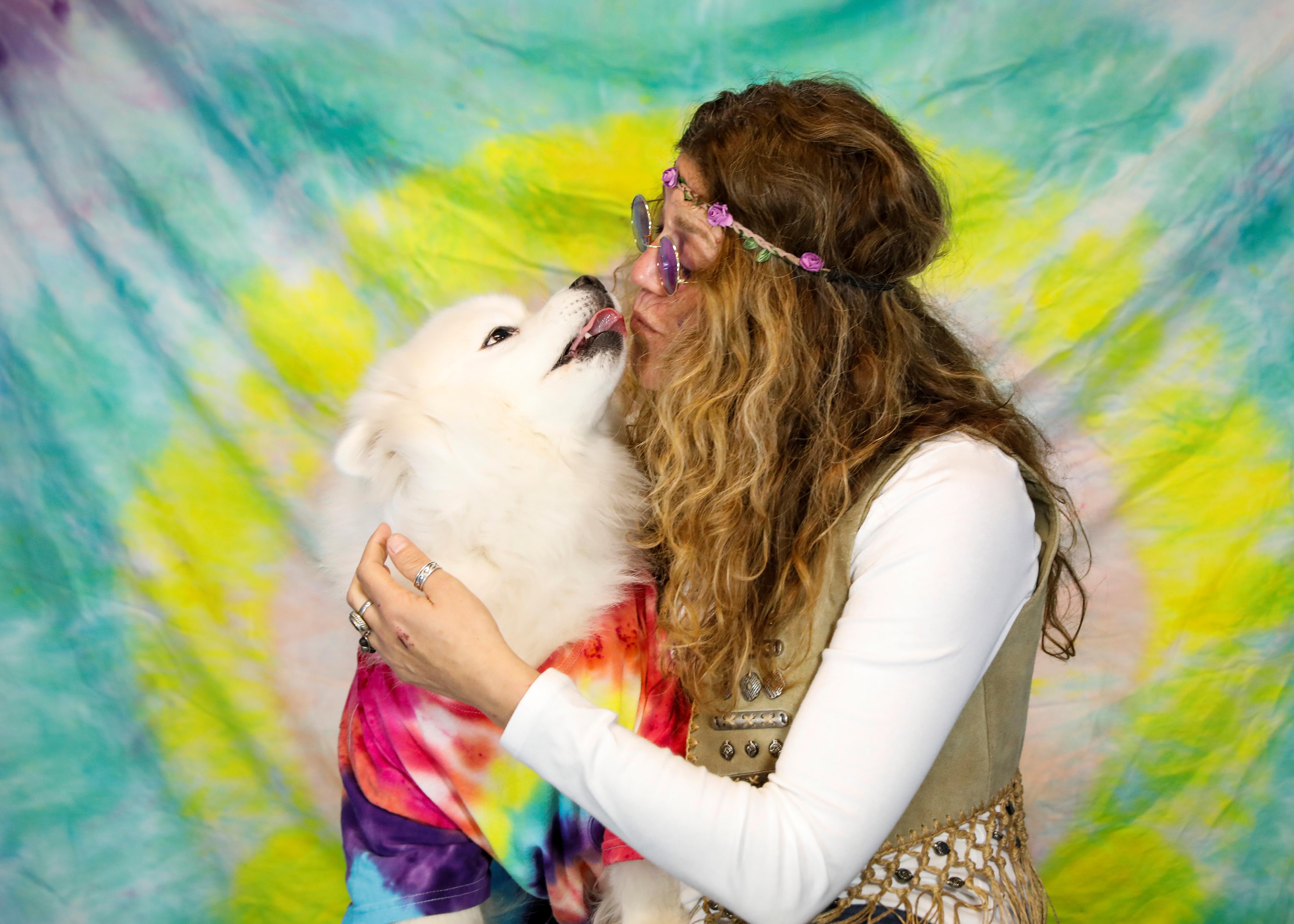 Dog skeletons are showing up in ghoulish decorations. Sales of bony decorations modeled on breeds ranging from Chihuahua to Doberman have grown 18 percent since the decorations were introduced in 2014, said spokeswoman Michelle Johnson of Oriental Trading, the party goods giant.

Long known as a holiday for children, Halloween has increasingly become dog-centric in America as the U.S. birth rate has tumbled, reaching an all-time low in 2017.

“Pets are taking the place of children for many people,” said Jean Twenge, author of “Generation Me,” a book about millennials. “People want to dress them up in costumes for Halloween and include them in the family portrait.”

For some couples, a dog serves as a “kind of dress rehearsal for parenting,” said University of Pennsylvania Professor James Serpell, who lectures on human-animal interactions.

Putting the pooch in a Halloween getup is “part of a national trend toward treating pets, especially dogs, as junior family members – analogous to kids who never grow up,” Serpell said.

But too much of a good thing threatened the fun this year in New York City. The beloved Tompkins Square Park Halloween Dog Parade was canceled in August after the city said its growing popularity required organizers to secure $1 million in insurance for the event, which drew more than 20,000 people in 2017.

Following weeks of public outrage, the parade was rescheduled this month after a local civic group offered to back it.

At Wuffstock, Harry posed for his Psychedelic Photo Booth souvenir, munched on “groovy granola” treats and barked at his buddies bobbing for apples at the filled-to-capacity Halloween bash. Previous themes have been Muttster Mash, Game of Bones and Ghostpupsters, said third-generation owner Joanne Morris. 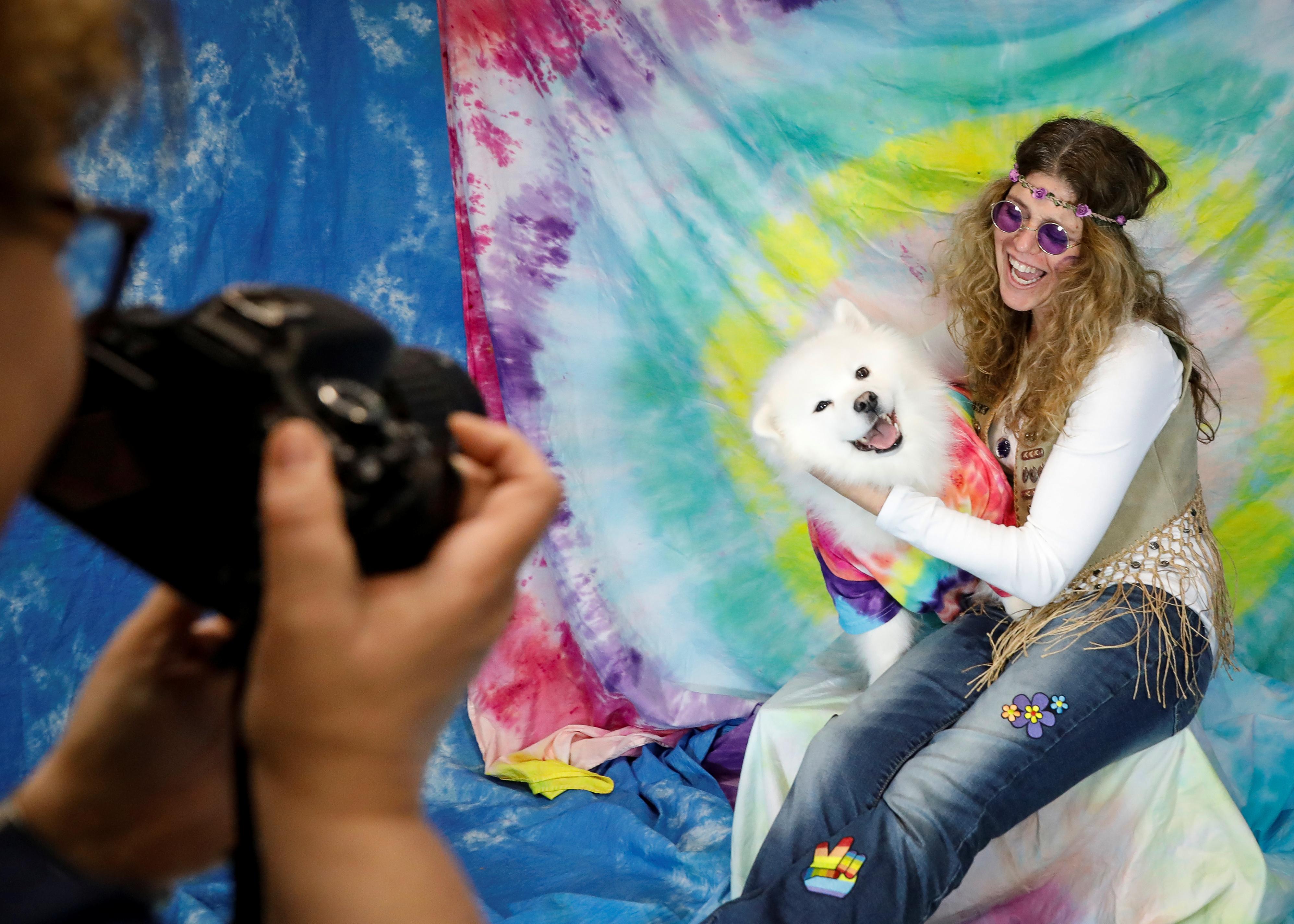 Lisa Burke, 53, a development consultant from New Vernon, New Jersey with two college-aged sons, hugged Agatha, a 2-year-old Golden Retriever, before she scampered off for the four-legged festivities.

“She’s the little girl I never had,” Burke said, beaming.