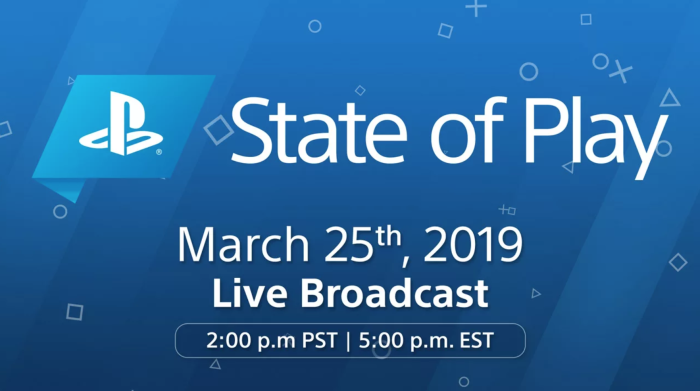 “State of Play,” much like Microsoft’s “Inside Xbox” series or Nintendo’s Nintendo Directs, is meant to offer “updates and announcements from the world of PlayStation.” The first episode, according to the PlayStation Blog, will feature PlayStation 4 and PlayStation VR software, including new trailers, game announcements, and gameplay footage.

With Sony opting out of making an appearance at E3 2019 for the first time ever, it appears the company is following Nintendo’s lead, which doesn’t usually hold press conferences at the trade show. Instead, Nintendo is content to drop several bombshell announcements and other updates over the course of the year via Nintendo Directs. Sony also said it wouldn’t be hosting a PlayStation Experience this year as well.

State of Play will be returning “throughout the year” with additional updates and announcements, likely at various intervals rather than regularly scheduled dates.

The showcase will be streamed live on Twitch, YouTube, Twitter, and Facebook worldwide, with a VOD soon to follow after the episode airs. The stream is set to begin at 2:00pm PT, but there’s no word just yet on how long the stream will run. Typically, similar Nintendo Directs and episodes of “Inside Xbox” have featured runtimes varying from 15 minutes to over an hour, so we’ll have to wait for the first installment of “State of Play” to set the tone.