Corn dogs are one of those foods that I just don’t eat very often. It’s not due to lack of interest (because I think corn dogs are totally delicious.) I may snack on a corn dog every few years, but it’s just not something I eat on the reg. Tbh, corn dogs remind me of being a kid and going to the fair. So, whenever I get the chance to indulge in one of my favorite childhood treats, I go for it. That’s why I’m pretty jazzed about Sonic’s 50-cent corn dog deal for March 2019. The offer is only available for one day, so get ready to mark your calendars.

Sonic’s 50-cent corn dog deal is happening on Wednesday, March 27, per a tweet from the fast-food chain. That’s right, you can get Sonic’s signature corn dogs for just 50 cents each, if you act quickly. The deal is valid all day long on March 27. I’m thinking this is going to be the perfect hump day snack to get you through the second half of the work week. I know it will be for me.

This particular corn dog deal is available at participating locations nationwide, but only while supplies last, according to Sonic. Sadly, the 50-cent corn dog deal can’t be used in conjunction with other offers or combos. That’s really too bad, because Sonic has a slew of great deals like half-priced drinks and slushes during its daily Happy Hour event from 2 p.m. to 4 p.m. However, you can come back to Sonic for Happy Hour another time.

The deal is located within the Sonic app (available for iOS and Android devices). However, you don’t need to scan a barcode or show a coupon to claim the 50-cent corn dog deal. Just make sure to mention the promotion when you place your order. It’s not required, but it never hurts to double check that you’re getting the deal you came for.

Sonic describes its corn dogs as "utopia on a stick" and if that isn’t the most accurate description of a corn dog, then I don’t know what is. Sonic’s corn dog is made with sweet corn batter and is deep-fried until it reaches a nice golden brown color on the outside, according to Sonic. This corn dog sounds like it’s an ideal balance between sweet and salty

When it comes to condiments, corn dogs don’t discriminate. Ketchup and yellow mustard are some of the more common sauces you can dip a corn dog into. Sometimes I like to use barbecue sauce, honey, or hot sauce and ranch to spruce up the flavor of my corn dog. Really, anything goes when it comes to corn dog condiments, IMO. 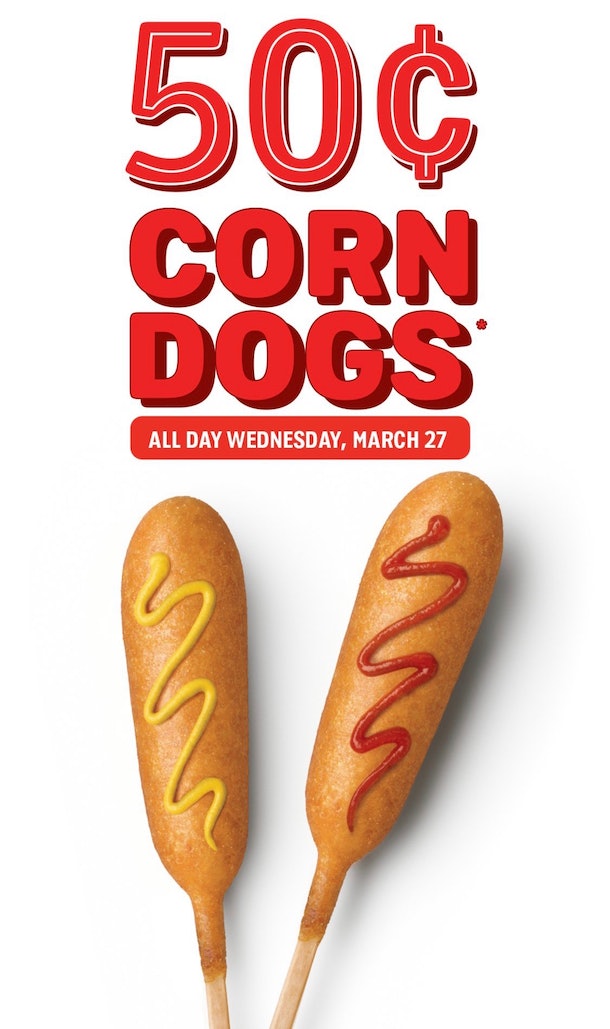 This isn’t the first time that Sonic has offered 50 cent corn dogs. You may remember back around last Halloween when Sonic ran the same deal. It’s been a hot minute since Oct. 31, so I’m glad to see this delicious deal back in rotation. Just remember that the current 50-cent corn dog deal from Sonic is only available on Wednesday, March 27. I don’t know when the offer will be coming back next, so consider this your warning. See you there.