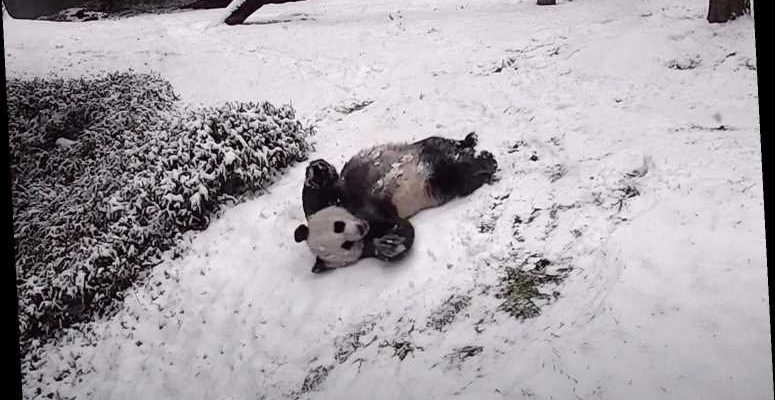 No one is having a better snow day than the giant pandas at the Smithsonian's National Zoo.

After a winter storm struck parts of the Northeast over the weekend, the Washington D.C. zoo's family of giant pandas eagerly frolicked out into the winter wonderland on Monday — and they fell head of over heels (literally) in love with the snow.

In a video shared by the zoo, female giant panda Mei Xiang and male giant panda Tian Tian can be seen rolling around in the snow in their outdoor habitat. At one point, one of the adorable pandas slides down a snowy hill on their back and then continues to roll through the cold stuff towards the trees. The zoo also shared photos on Twitter and Instagram of more animals enjoying the winter weather, including 5-month-old giant panda cub Xiao Qi Ji, who had his first encounter with snow on Monday.

"Keepers say he took a little nip at the fresh powder," the zoo wrote of the meeting.

Last week, Xiao Qi Ji made his livestream debut at Smithsonian's National Zoo & Conservation Biology Institute. During the stream, which was open to all animal lovers, the National Zoo's newest panda cub licked up a cooked sweet potato in front of his legions of online fans.

Xiao Qi Ji spent the rest of the livestream getting food all over himself, attempting adorable handstands, and showing off his strength by playing tug-of-war with his keeper.

Want to get the biggest stories from PEOPLE every weekday? Subscribe to our new podcast, PEOPLE Every Day, to get the essential celebrity, entertainment and human interest news stories Monday through Friday. Get a taste of the podcast below. Giant panda curator Michael Brown-Palsgrove previously said that Xiao Qi is currently 22 pounds and has about 230 to go. He is still nursing for most of his nutritional needs but is exploring new foods, and is also less dependent on mom Mei Xiang in other ways.

"He can get himself places," said Brown-Palsgrove. "He knows where she's at. He doesn't need to call her."

The Smithsonian's National Zoo is currently closed due to the COVID-19 pandemic.