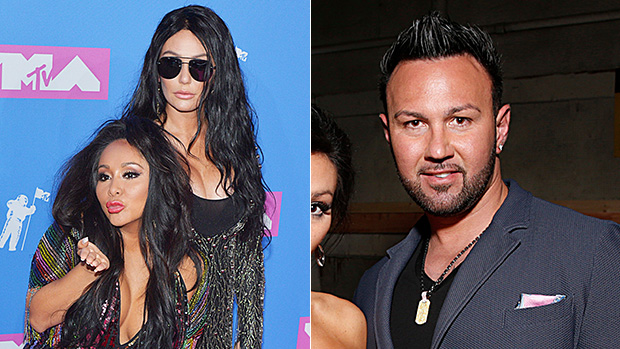 JWoww is in the midst of a messy divorce & custody battle with her ex, Roger Mathews, but Snooki has proven to be he ultimate support system for her ‘Jersey Shore’ co-star.

Nicole ‘Snooki’ Polizzi, 31, and Jennifer ‘JWoww’ Farley, 33, share the sweetest friendship, and HollywoodLife has EXCLUSIVELY learned just how supportive Snooki has been through her co-star’s legal woes with her ex, Roger Mathews. As Jenni’s nasty custody battle rages on, Snooki is right by her side the whole way through. “JWoww is so appreciative of how Snooki has been such a constant rock for her as she goes through the divorce with Roger,” a source close to the Jersey Shore cast-mates says. “Snooki checks in on Jenni daily, often multiple times, and has even taken the kids for Jenni here and there just to give her a breather and help her out. Jenni knows Snooki is always there for her. Even their daughters are so close. They’ve become little best friends and both Jenni and Snooki laugh over how they’re like little Snooki and JWowws,” the source adds. HollywoodLife has reached out to reps of both stars for comment.

The insider went on to explain that Jenni is staying positive through it all. “Jenni is so incredibly strong and Roger has often been challenging for her to deal with, however, she’s putting her kids first and setting a positive example for them,” the source explained. JWoww and Roger share two children, Meilani, 4, and Greyson, 2, and have both put in requests to obtain sole custody. After Jenni requested primary physical custody in her divorce petition from Sept. 2018, Roger came back with the same demand (in addition to asking for joint physical custody) in his own divorce documents that The Blast obtained on Jan. 24.

JWoww first filed for divorce on Sept. 12 of 2018 with ‘irreconcilable differences’ cited as the reason. At the time, she asked for primary physical custody, and requested that the prenup they have in place remain valid. Since, it’s been an increasingly heated battle between Jenni and her estranged husband. In December, JWoww filed a temporary order of protection against Roger, and later shockingly accused him of abuse. In a lengthy statement posted to her website, she went on to claim that he had an affair, and alleged that he failed to take their son, who has Autism, to scheduled therapy appointments and other doctors visits. Clearly, this custody battle is far from over, but at least Jenni has Snooks at her side. The two pals have always had each other’s back since first appearing on the famed reality show, and now, are in it for the long haul.