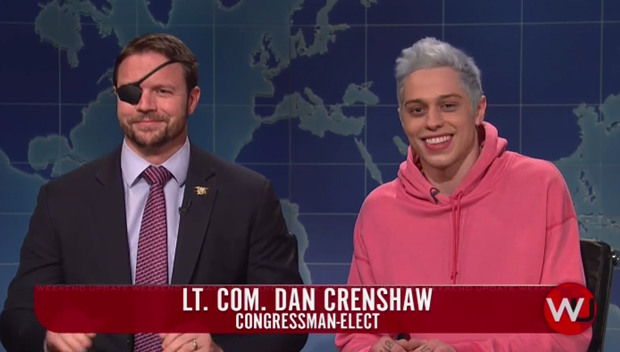 Dan Crenshaw got a chance to clap back at Pete Davidson on ‘SNL’s Weekend Update! Watch the awkward moment when Crenshaw’s Ariana Grande ringtone goes off here!

Pete Davidson offered a lengthy apology to Dan Crenshaw on SNL‘s Weekend Update over the comedian’s insensitive joke about his eye patch, only to get a visit from none other than Dan Crenshaw. The high point of the hilarious segment was when Dan’s phone went off with an Ariana Grande ringtone. Dan hilariously asked, “Oh, do you know here?” Then, Crenshaw dissed Pete’s appearance saying he looked like the meth from Breaking Bad were a person, a troll doll with a tape worm and Martin Short in The Santa Clause 2. Check out the epic Weekend Update moment below!

Last week’s Weekend Update was an emotional one. During his appearance on the segment, Pete Davidson momentarily tackled his erstwhile engagement to Ariana Grande. He said, “And the last thing I will say is I know some of your curious about the breakup but the truth is it’s nobody’s business and sometimes things don’t work out, and that’s OK. She’s a wonderful, strong person, and I genuinely wish her all the happiness in the world. Now, go vote on Tuesday.”

Another standout Weekend Update moment was when Pete took Kanye West to task over a lengthy rant he tried to go on at the end of the show, and denied Kanye’s accusation that the cast had bullied him over his MAGA hat.  “He wore it all week,” Pete explained. “Nobody told him not to wear it. I wish I bullied you. I wish I’d have suggested it might upset some people like your wife, or every black person ever.”

We’ll keep you posted with all of the latest SNL sketches. In the meantime, check out all of the photos from the 44th season in our gallery above.