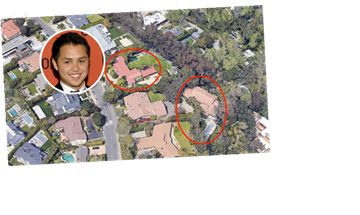 Shockingly — or perhaps not — Murphy and Bateman have already demolished that historic estate and are now fashioning a new, substantially larger mansion of their own custom design. But it would appear the .76-acre lot is insufficient for their grand plans, so the young couple have quietly laid out an additional $9.5 million for the house immediately next door.

Since the latest real estate purchase was never on the market, photos are nonexistent and details remain scant at best. However, tax records do reveal the property contains a sprawling ranch-style abode that was originally built in 1969, underwent a significant remodel in the early ’80s, and has four bedrooms and five baths in roughly 4,500 square feet of living space.

The flag lot spread lies down a long driveway, spectacularly situated on the rim of the Riviera. The world-class views stretch for miles — to the Pacific Ocean, Catalina Island and beyond.

Records also indicate the home’s seller was music manager Gary Borman, CEO of Borman Entertainment and a man perhaps best-known for repping a slew of country music superstars. Some of his longtime clients have included Faith Hill, Keith Urban and Trace Adkins.

While Murphy’s plans for the former Borman property are not yet publicly known, it seems safe to assume he will demolish the house, combine it with his now-vacant estate next door, and subsequently spend many millions building a compound worthy of their 1.5-acre property. On top of the $29 million already spent for the land alone, of course.

And the future new Bateman-Murphy estate happens to be located on what is arguably the Palisades’ most coveted street. Other neighboring homeowners include Kate Hudson, Michelle Pfeiffer, Molly Sims, Reese Witherspoon, Sam Raimi and Conan O’Brien, just to name a few.

Some of Murphy’s multiple other L.A. properties include a $6 million modernist house elsewhere in the Palisades, a $5 million Venice, Calif. shack tucked behind the ultra-trendy Abbott Kinney shopping district, a $2.26 million bungalow in inland Venice, a $2.1 million contemporary loft near Venice Beach, and a $2.1 million home in Santa Monica.