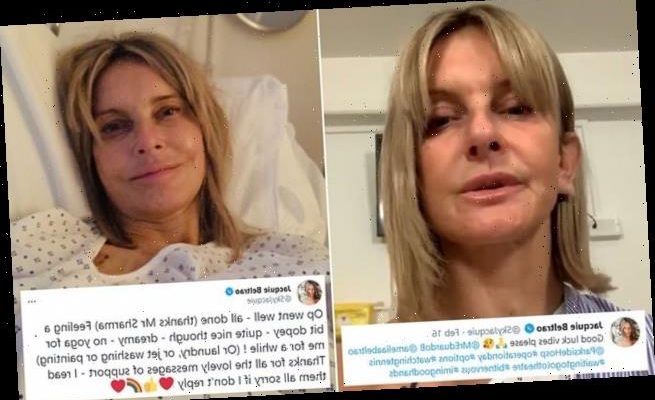 Sky News sports presenter Jacquie Beltrao, who revealed in June that she was facing a second battle with breast cancer, admitted she was feeling a ‘little bit worried’ about having an operation on her lymph nodes in a pre-surgery video.

Former Olympic gymnast Beltrao, 55, from Dublin, took to Twitter on Tuesday and shared a short clip taken as she waited in hospital, alongside a caption which read: Good luck vibes #bitnervous #imingoodhands.’

The mother-of-three, who can be seen in a hospital gown with arrows drawn on her left breast, explained: ‘So here I am, operation clear out your lymph nodes. On the left, where he has drawn an arrow. Oh god, I feel like I have been here before, it’s because I have.’

She then added that was ‘OK,’ before moving the camera down to reveal her compression socks. 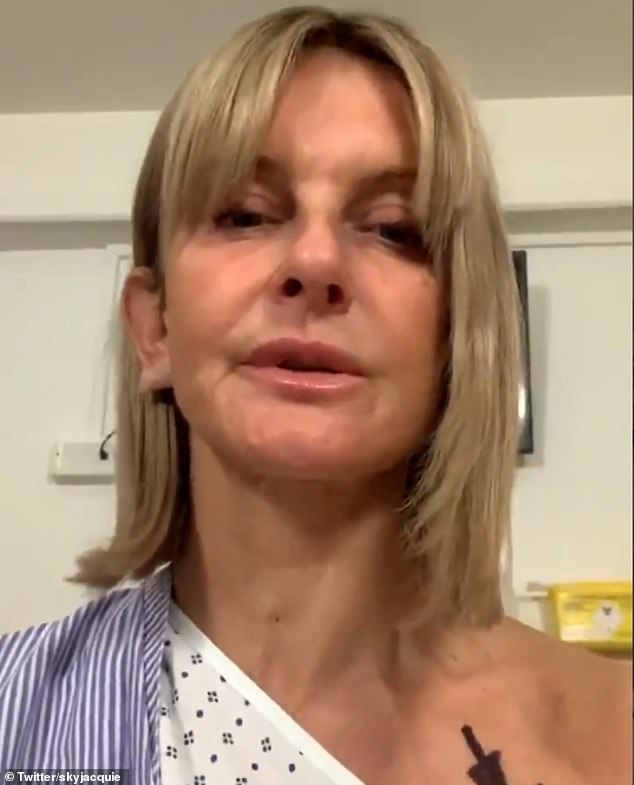 Jacquie Beltrao, 55, who revealed in June that she was facing a second battle with breast cancer, admitted she was feeling a ‘little bit worried’ about having an operation on her lymph nodes in a pre-surgery video on Tuesday (pictured)

‘I’m all set actually, I’ve got my compression socks on,’ she said. ‘They are very lovely. I don’t know if you can see them. Yep. It’s a look, it’s the hospital look and I am trying to rock it.’

Despite joking about her outfit, Jacquie went on to discuss her worries regarding the upcoming surgery.

‘I am a little bit worried, but I am in very good hands,’ she explained. ‘It is a very short operation.

‘I have only got to wait a couple of hours now and I’ll be getting going. I’ll speak to you when I wake up.’ 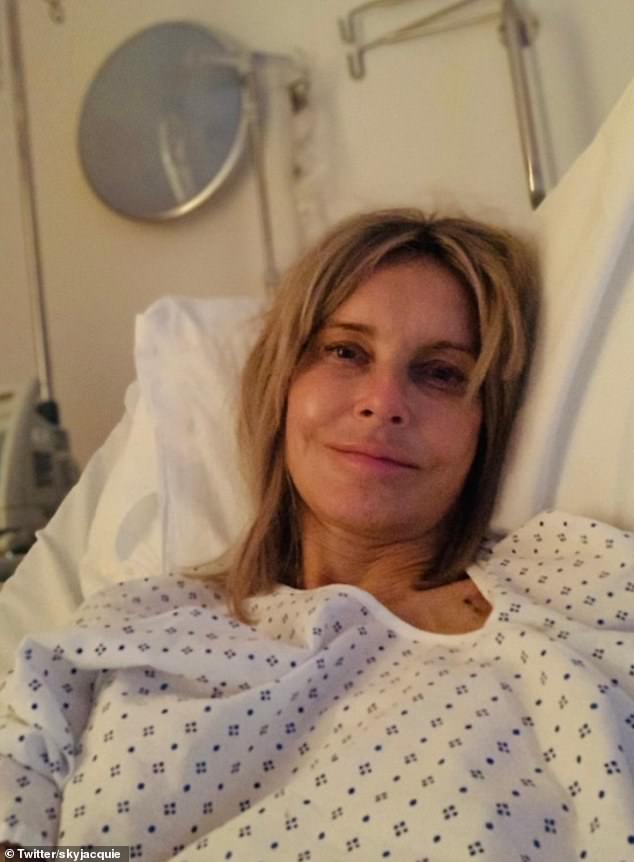 In a follow-up post after the surgery, Jacquie shared a photo where she could be seen smiling from her hospital bed

Alongside the image, the 55-year-old wrote: ‘Op went well – all done (thanks Mr Sharma) Feeling a bit dopey – quite nice though – dreamy – no yoga for me for a while!’ (pictured)

In a follow-up post after the surgery, Jacquie shared a photo where she could be seen smiling from her hospital bed and updated her 75, 000 social media followers.

She penned: ‘Op went well – all done (thanks Mr Sharma) Feeling a bit dopey – quite nice though – dreamy – no yoga for me for a while ! (Or laundry, or jet washing or painting). Thanks for all the lovely messages of support – I read them all sorry if I don’t reply.’

The mother-of-three found a new, ‘tiny’ lump during lockdown and began chemotherapy soon after.

Beltrao admitted in July that it had been a ‘living nightmare’ since her new grade-three diagnosis.

What is breast cancer?

Breast cancer develops from a cancerous cell which develops in the lining of a duct or lobule in one of the breasts.

When the breast cancer has spread into surrounding breast tissue it is called an ‘invasive’ breast cancer. Some people are diagnosed with ‘carcinoma in situ’, where no cancer cells have grown beyond the duct or lobule.

Most cases develop in women over the age of 50 but younger women are sometimes affected. Breast cancer can develop in men though this is rare.

Staging means how big the cancer is and whether it has spread. Stage 1 is the earliest stage and stage 4 means the cancer has spread to another part of the body.

The cancerous cells are graded from low, which means a slow growth, to high, which is fast growing. High grade cancers are more likely to come back after they have first been treated.

A cancerous tumour starts from one abnormal cell. The exact reason why a cell becomes cancerous is unclear. It is thought that something damages or alters certain genes in the cell. This makes the cell abnormal and multiply ‘out of control’.

Although breast cancer can develop for no apparent reason, there are some risk factors that can increase the chance of developing breast cancer, such as genetics.

What are the symptoms of breast cancer?

The usual first symptom is a painless lump in the breast, although most breast lumps are not cancerous and are fluid filled cysts, which are benign.

The first place that breast cancer usually spreads to is the lymph nodes in the armpit. If this occurs you will develop a swelling or lump in an armpit.

How is breast cancer diagnosed?

If you are confirmed to have breast cancer, further tests may be needed to assess if it has spread. For example, blood tests, an ultrasound scan of the liver or a chest x-ray.

How is breast cancer treated?

Treatment options which may be considered include surgery, chemotherapy, radiotherapy and hormone treatment. Often a combination of two or more of these treatments are used.

How successful is treatment?

The outlook is best in those who are diagnosed when the cancer is still small, and has not spread. Surgical removal of a tumour in an early stage may then give a good chance of cure.

The routine mammography offered to women between the ages of 50 and 70 mean more breast cancers are being diagnosed and treated at an early stage.

She was first diagnosed with breast cancer in 2013 for which she went through five cycles of chemotherapy in four months.

Speaking in a video posted to Twitter explaining her new diagnosis, Beltrao said: ‘So, during lockdown I took my own advice, did a check, found a tiny, tiny, little lump just here.

‘Had it checked out and a biopsy straight away and it turns out it’s grade three breast cancer, much nastier than the first one I had.

‘I’m sharing this because it felt weird to be going back to work on Sky and being on social media and acting like everything was shiny, perfect and fun when it wasn’t.’ 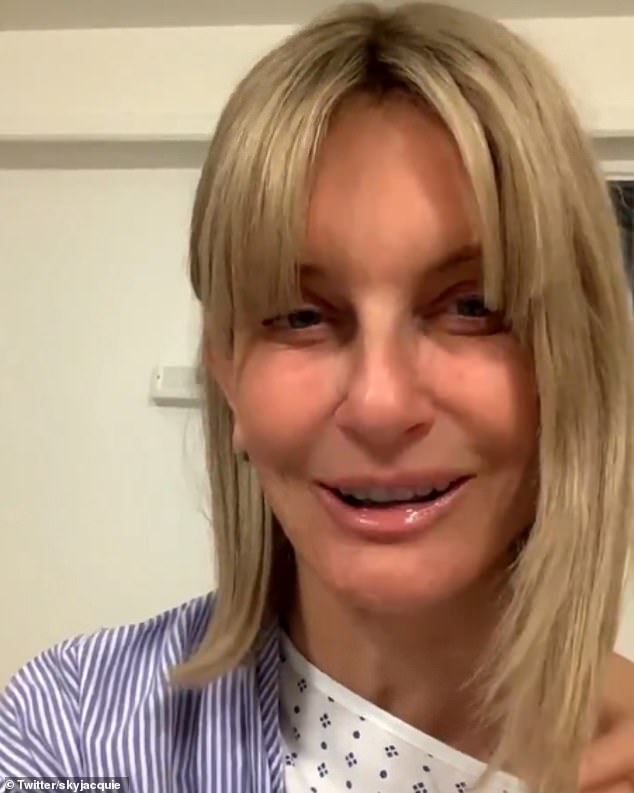 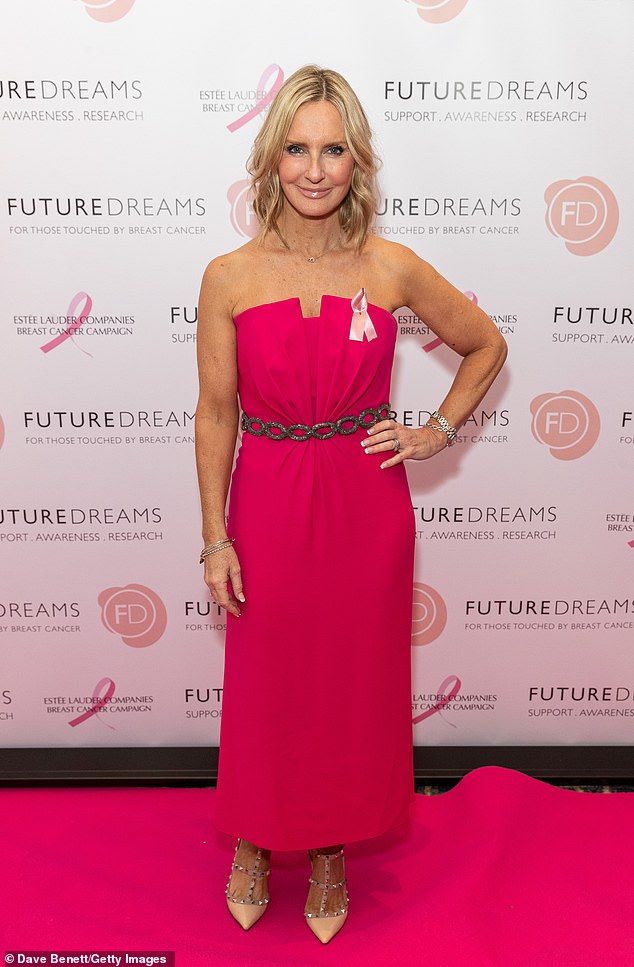 The mother-of-three found a new, ‘tiny’ lump during lockdown and began chemotherapy soon after. Pictured, in October 2007 attending the Future Dreams Ladies Lunch supported by Estee Lauder at The Savoy Hotel