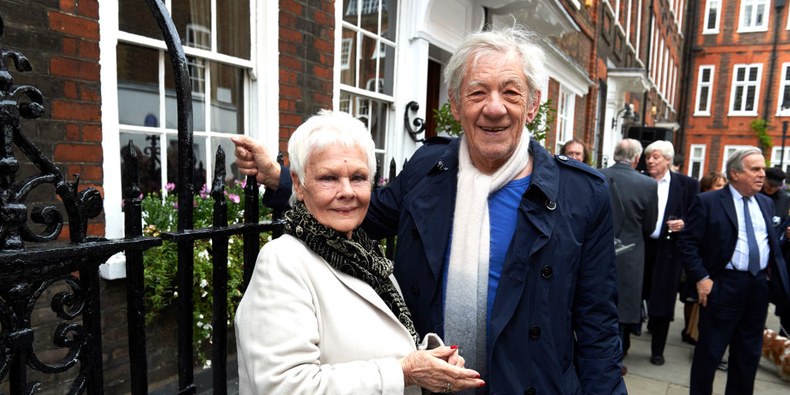 Sir Ian McKellen may not have starred in the Harry Potter series, but he certainly gives life to the franchise’s popular and oft-quoted phrase “mischief managed.”

Don’t let the honorable “Sir” or “Dame” titles fool you—both McKellen and Judi Dench can apparently be just as naughty as your average teen, according to McKellen’s recent confession on The Graham Norton Show. The story goes a little something like this: Not too long ago, McKellen and Dench were invited to a dinner at Buckingham Palace, so they went, as honorable British actors are wont to do. Once inside, these two unsuspecting jokesters sneaked away from the party and walked through the corridors until they came across a room that McKellen classified as “vaguely familiar.” They were listening to music, of course, and danced a little bit to the tune, and soon some very silly behavior ensued.“We had a little twirl around the room, nobody else there, and I said, ‘I think this is the throne room,’” McKellen told Norton.

It turns out that, 30 years ago, in 1988, Dench was named a Dame Commander of the Order of the British Empire, and three years later, McKellen was knighted, all in that very room. And what exactly does one do upon realizing one is in the room where he or she was given the honorable title of “Sir” or “Dame”? Well, according to McKellen, the easy answer is to dance and dance some more, until one finds oneself unsupervised and perched upon the throne that belongs to the Queen of England. “We went on dancing around the corner, and we found ourselves behind the band, and there, behind this sort of partition, were the thrones…so we sat on them,” he admitted.

Apparently, these sort of shenanigans have happened behind Queen Elizabeth II’s back on more than one occasion, and this wasn’t even the first time McKellen broke a rule at Buckingham Palace. He told Norton about the time he stepped out onto the balcony of the building to smoke a cigarette, only to be accosted by a policeman with a search light on the Mall, shouting up, “Sir Ian, don’t forget you’re in Buckingham Palace.” As luck would have it, six months later McKellen apparently ran into the same policeman, who recognized the actor and joked, “Oh, not you two again!”

Dench has also been on a bit of a rebellious streak lately—recall that the actress got her first tattoo (ink that reads “carpe diem”) at 81 years of age, in 2016. Maybe the dame took some notes from Lady Macbeth, whom she played in 1979 opposite McKellen as the titular Scottish general (it is Lady Macbeth who convinces her husband to get rid of King Duncan so that they may both become the highest Scottish royalty), and encouraged McKellen to sit on the throne, or maybe he’s the one who egged her on to break a major rule in the palace. One thing, however, can be sure—Dench should probably get her partner in crime to sign some sort of waiver to prevent him from tattling on any more of their adventures in the future.

Related: Maggie Smith and Judi Dench Gossiping in Tea With the Dames Trailer is Better Than Any Real Housewives