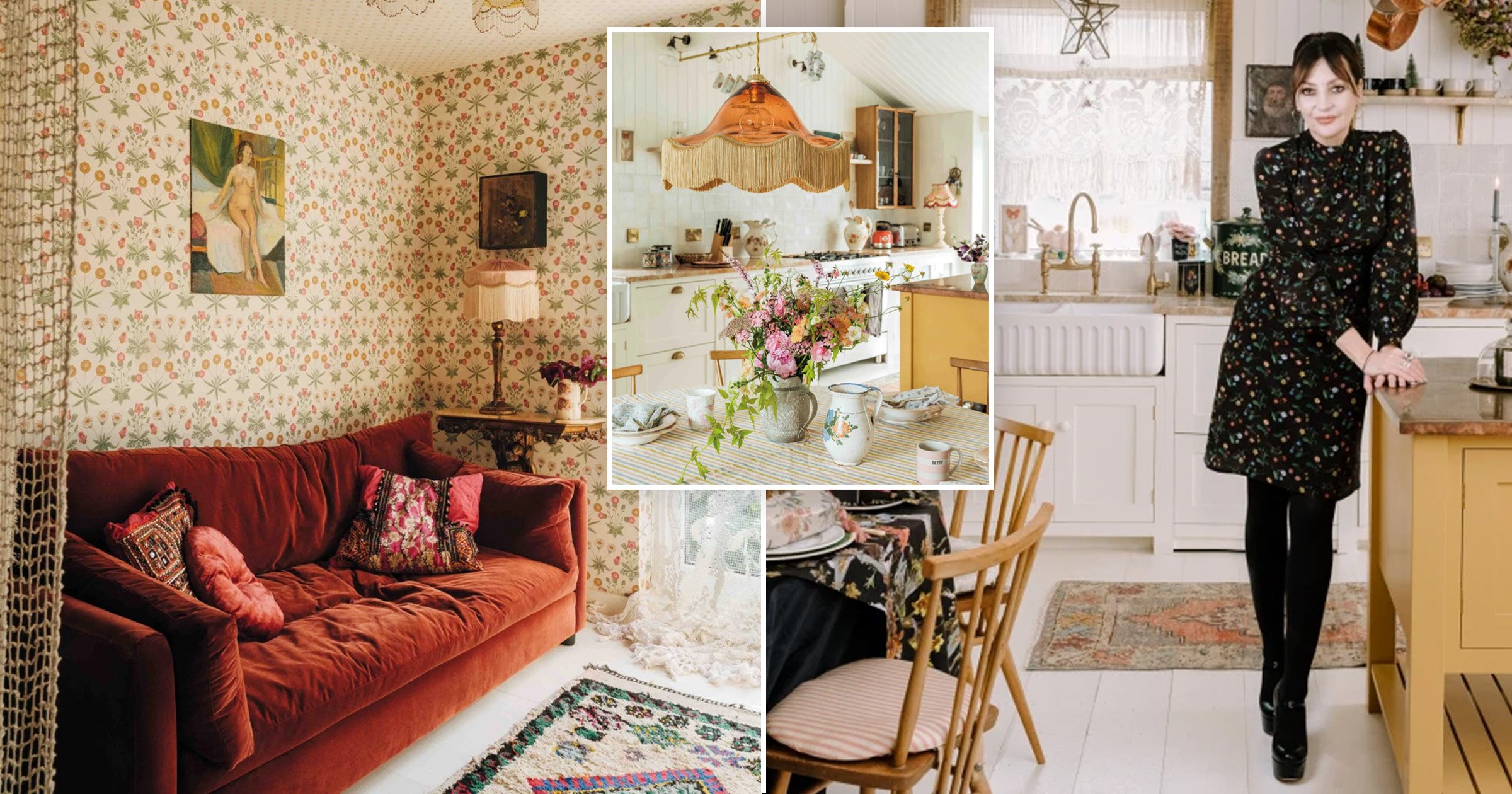 Pearl Lowe has made an art form out of reinventing herself.

The erstwhile singer-songwriter, who fronted Britpop band Powder, is now better known as the high priestess of all things vintage, with a back catalogue of beautifully curated country homes featuring exquisitely pretty pieces from the past, and her own designs for lace panels, floral wallpaper and cushions.

Along the way, she has overcome addiction during her wild years as part of the now infamous ‘Primrose Hill set’, married her long-time love, Supergrass drummer Danny Goffey, with whom she has raised four children, produced her own fashion and swimwear ranges, and written three books.

It’s fair to say, then, that she isn’t afraid of a challenge. But property and interiors-mad Pearl, now 52, admits that when she took on the transformation of a rundown coastal home in Winchelsea, East Sussex, last year, she hadn’t known quite what she was letting herself in for.

‘So I really should have been better prepared. But we hadn’t realised the house was off-grid, and had no clue what a biomass boiler was. We have spent a small fortune on getting absolutely everything redone, from installing a new cesspit to two new boilers, rewiring, replumbing and new decking.

‘Danny says it has nearly killed him. But I didn’t even need to set foot inside the house to know it was The One.’

Despite owning an elegant 11-bedroom yellow sandstone Georgian house in Frome, Somerset, Pearl says it was a lifelong fantasy to own a coastal bolthole, driven by a nostalgic love of the faded glamour of the British seaside.

Having been gazumped on a house in Cornwall, she took out a map and restarted her hunt closer to home, in East Sussex – just a three-hour drive away and far more convenient for friends and family living in London.

‘When we found this place, at the end of a bumpy track and with a private stretch of beach a stroll away through a nature reserve, it was love at first sight,’ she says.

‘We made an offer right away, and didn’t bother getting a survey done – something I did later regret!’

The two-storey, four-bedroom clapboard house had a two-bedroom cabin in its acre of gardens, and was adorned with delicate shell mosaics inside and out.

‘They were created by the artist who lived here in the 1940s,’ says Pearl. ‘I found the idea so incredibly romantic. It was my aesthetic entirely.’

However, when she and Danny, 48, arrived to spend their first night at the house, with snow on the ground outside and the biomass boiler out of order, she broke down and sobbed.

‘We slept on the floor that night as the mattress hadn’t arrived, and were convinced we had made a terrible mistake. It has been incredibly hard work, and has completely consumed us, but a year on it’s finally finished, and is absolutely perfect.’

The couple moved their trusted builder, Rich, into the cabin for several months while he restored the house and created a neutral backdrop for Pearl’s interiors scheme. This, too, though, presented a challenge.

‘When we moved in, the house was very colourful and boho, which isn’t my style at all. But I realised the floral curtains and wallpaper I love so much just weren’t going to work in a coastal home. I wanted to be sympathetic to the location, and preserve the simplicity of the house, which meant going for a paler colour scheme.’

The backdrop may be Farrow & Ball’s Pointing, then, but Pearl’s signature style is very much on show here. She turned first to the kitchen, with its original tongue-and-groove panelling and vaulted ceiling.

Pale Shaker-style cabinetry by deVOL Kitchens and a butler’s sink give it the obligatory vintage look, with an amber-coloured mouth-blown glass pendant from Rothschild & Bickers overhanging the dining table.

French windows, opening onto the garden, are draped in floaty white lace panels, allowing for the perfect balance of light and shade.

In the flowing, open-plan living space, Pearl stripped back the floorboards and painted them in off-white, enlivening them with Moroccan rugs. The prettiness of a floral, antique bucket chair, one of her favourite pieces of furniture, is balanced out with a battered leather sofa from The Old Cinema.

As always for Pearl, however, it’s the finer details that count.

‘I am a complete hoarder, so it was a great opportunity to clear out some of the cupboards in Frome,’ she says.

His gallery wall in the sitting room is his piece-de-resistance in the house, which has come to be known as ‘Pearl’s on Sea’.

An eclectic mix of oil paintings, nudes and framed prints are hung around a wooden case containing a taxidermy bird.

The couple’s musical and cultural icons are referenced in their black-and-white photography collection, too: Serge Gainsbourg and Jane Birkin, David Bowie and Debbie Harry.

It’s very much a homage to the allure of the past. Some things, however, do need to be brand new.

‘As much as I love vintage furniture, I don’t like to scrimp when it comes to comfort,’ insists Pearl. ‘And I don’t want anything that might be a bit smelly!’

For new beds and sofas, then, she plumps for the luxe private members’ club feel of Soho Home.

She sources her silky, end-of-bed eiderdowns from Preen by Thornton Begrazzi, and luxuriant velvet-trim cushions come from Sera of London.

Although she does use Facebook Marketplace, Instagram and eBay, when she gets an itch for vintage browsing, Pearl says she is spoiled for choice in and around her new seaside locale: her go-to haunts include Rae in Rye, The French Depot in St Leonards-on-Sea, Hawk & Dove, Merchant 57 and AG Hendy in Hastings, as well as car boot sales.

This theme of rock’n’roll romance continues beyond interiors to the large, tree-filled garden.

Pearl has installed a fanciful ‘Old Rocker’ swing seat from ODD and a wrought iron daybed.

Beyond lies the cabin, which Betty has commandeered as her own teenage retreat on weekends home from boarding school.

With its own decked terrace, featuring a sustainable wood-fired hot tub from Hikki, it also has its own kitchen, with dining chairs originally owned by Daisy, and recently reupholstered in a Liberty print.

A real family affair, Pearl’s on Sea has become a seaside sanctuary for the whole clan, a place where they can gather away from their busy working lives.

But if you would love to experience Pearl’s inimitable style yourself, you can rent the home through Unique Homestays, from £6,150 per week sleeping eight people.

The story of its renovation has been celebrated in Pearl’s latest book, Faded Glamour By The Sea, packed full of design tips and also featuring Helena Christensen’s waterside home.

Life has certainly changed for Pearl since her Primrose Hill days in the 1990s, when her hellraising with Kate Moss, Meg Mathews and the Gallaghers became tabloid fodder.

‘I got sober, left London and moved to the country in 2005. My children always nag me to have more parties, or go out more, but I try and explain I have done enough of that,’ Pearl laughs.

‘I am such a home bod: I hate staying at other people’s houses, and going on holiday is a real challenge, in case I am miserable in my surroundings.’

Pearl says when she has to leave home, she will take a suitcase packed with eiderdowns, candles and flowers. ‘These things are so important in influencing how I feel,’ she says. ‘Danny gets so cross with me.’

So will this be Pearl’s last interiors project? It’s unlikely, she suggests. Danny is keen on moving back to London once Betty has left home, and they have toyed with the idea of buying a place abroad, if only for the sunshine.

‘But sometimes,’ she muses, ‘your sense of paradise is right there, just a few counties away.’

Shop Pearl Lowe’s designs on her website. To book a stay at Pearl’s On Sea visit Unique Homestays.